This was my 8 marathon in my year of 8 marathons and 11th overall.


It was also my 3rd trail race..the second I've run put on by coastaltrailruns.com. As with most trail races.....it is very hilly for me: 4300' of up/down. (see previous blog post for elevation profile.


The course is an out and back half marathon course with the marathoners doing it twice. This has pluses and minuses. On the minus side, you cover the same ground 4 times and this could be thought of as boring. On the plus side you know what you are in for after one trip out and can pace yourself better. In theory. Also, you get to see your fellow runners as you are going ..several times..and this is fun.


Of course lots of brain function goes out the window in a tough race and so there' s also the possibility you won't remember anything you've seen before and hence it won't be boring  (You probably think this is a joke...)


As you see the blazingly fast 50k runners and marathoners whiz by, they are sure to say "Good Job" as they see you trudging flying along. I had mixed feelings about this....because "Good Job" has become the stock thing you say to your kid when they do something that deserves a reward, (but not a REAL reward, just a measly metaphorical pat-on-the-head).  I admit I did grow to like it..especially as the brain function devolved during the day. 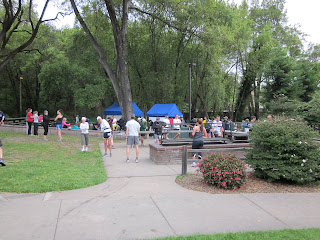 Anyway I get up this morning drive down to the Harvey West part in Santa Cruz and as usual people are already there and waiting for the start.


One of the unusual things about this race is that you actually have to cross the San Lorenzo River yourself, on foot, in chest deep water.


They do put up a rope to help keep your footing (and it does help) but it's not a given that you won't get a dunking.


If you are running the half, you do this river fording twice. For us marathoners and 50k runners you do it FOUR times. The river crossing is about 4 miles out on the 6.6 mile route we run 4 times. (with two huge climbs and descents each time).


The RD explained all about the course and showed us the water depth visually 8) and off we went at 8am. We did a little loop around the park to spread us out before we hit the single track. I had been looking for my friend Martha that was running the marathon but hadn't seen her.

About two minutes Martha caught up and said hello and continued ahead of me...she likes the uphills...I like the downhills. I was in this for two laps and knew the second one would be rough so I tried to stay slow even with all the halfers going so fast. 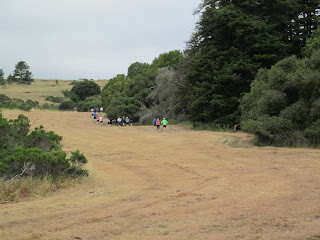 Eventually we came out on a clearing. It was still foggy but obviously this would be a good viewpoint when the sun came out. The relative flat allowed me to catch up and pass Martha so I could get another pic of her. 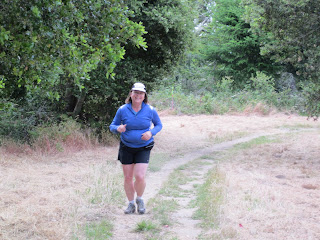 Then we went back into the forest and which became a redwood forest in short order. Eventually we came to the 10K turnaround point (5k). The lead guy had blasted by me and was heading back..zowie he was fast! 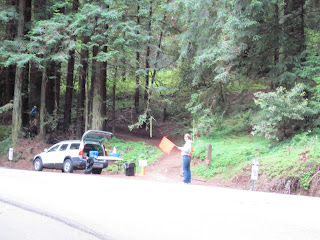 We come out of the woods and cross the road here and I took a pic back at the person that stopped me from getting smooshed by a car when I crossed the road. Thank you!


At mile 4 we came to the river crossing. I decided to leave my shoes on so I could step on rocks and stuff without fear. The RD warned us we'd probably have to take our shoes off and dump out some grit after each crossing and this was indeed so.  All this took time, but the Shoe-wearers seemed in general to be much faster crossing. 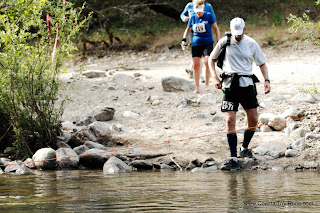 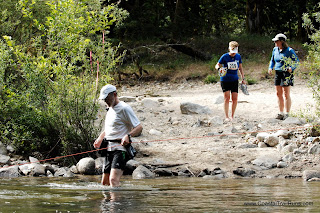 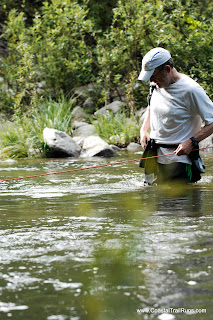 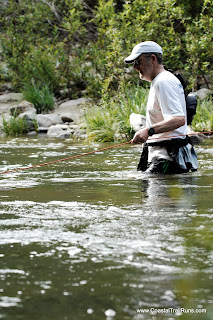 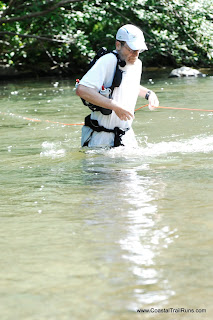 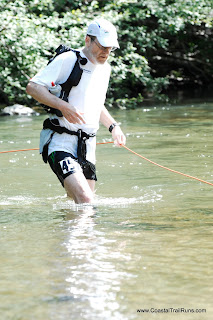 There was a young guy here taking pictures for the race and so everybody had good incentive to not be a doofus and take an unintentional swim.


I found it ok..not that hard. The first crossing was the hardest as the light was not strong (still foggy and the half marathoners had clouded up the water a bit in some places near shore (where the big rocks were on the bottom!). I had to sling my belt over my neck, since I had my camera, so I didn't want to slip.


After exiting the water we headed up the steepest mutha of a hill..about 500' of climbing. The first of 4 times. This part in the photo isn't so steep but everybody except the 'elite' amateurs is walking it.


There are two good flat-ish sections on this course I like: between the start area and the 5k point, and after this mutha hill, along the river to the turnaround aid station. I can actually run for long stretches here without any technical footing or up/downs.


On the way to the turnaround we see the river again. It's really beautiful. 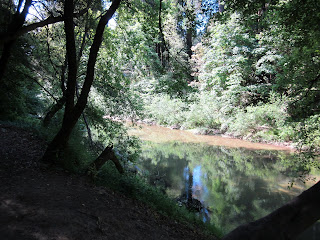 Eventually I get to the aid station and it has a lot of my favorites. I chow down on melon, salty baked Pepperidge Farm goldfish (yum!) and some PBnJ quarter sandwiches. After a couple of minutes of grazing, I head start back..it's taken me a little under 1:30 to reach this point. This means best case I'm looking at 6 hrs. I had assumed 6-6:30, but I knew I would have some fade with all these climbs and descents, so I upped my mental estimate at that point to 6:30-ish. I have one microsecond of pang that I'm later than I thought, but squash it right away. This run is not for racing, it's for having a good time out in 1500 year old forest and river.


On the way back you climb the backside of the mutha hill and there's a nasty place with what seems like a 30% grade. Pitons anybody? 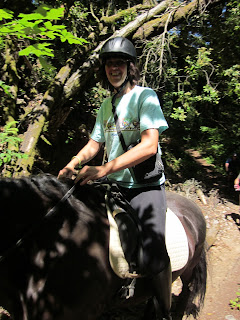 Over the hill and down to the river to ford it again, then a smaller hill. There are a few other creatures on the trails today. 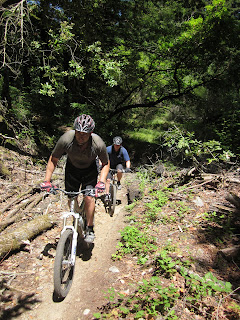 Luckily several sections of the trail are off limits for bikes so they really aren't a problem.


Eventually I come back to the section of the trail that's the high field and I almost zone-out head down and miss a very important left turn...luckily ahead of me there's two non-racing runners telling one of us races that he's missed the turn and I look left and go, "oh! Ooops!" and take the left. Whew!


I can see the ocean and the Moss landing power station way on the east short (it's about 5 pixels high in that shot).


Down we go to the finish area for the turnaround. I get to this point at about 3:03 but my legs are way more shot than a road marathon at this point.


On the way back up I see Martha converging on her finish and take a shot of her.


She takes one of me too.
So I keep going and do the whole thing again. I'm way more tired this time but I still manage to run on the flat parts...not as fast but hey.
I don't see many people on the way back..there's some marathoners behind me I know but not many still heading out. I can see I'm pretty close to the 6:30 time, a little slower due to my tiredness.


At the river, after crossing I put my belt on the beach and go back in and submerge up to my neck...oh that's nice! It's been getting warmer out here with the full sun we've been having. 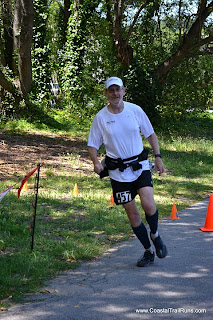 Finally I approach the finish...it's really nice..all the people hanging out call your name and cheer and hoot you in. Wendell ( the RD) puts the medal on me.


I hang out and rest and hydrate...and cheer in a few more people finishing for the next 45 min or so.  A great day...I'm really happy to have spent the day out in the redwoods...AND grateful for finishing the race...AND for not injuring myself in any way....now time for the ride home. (about 1 hr)


Coastal Trail Runs puts on a good race and I'll be doing more!