Well, it's been 13 months since my last post. Probably I've run about 1300 miles since then. Most of those miles aren't very hilly...where I live I have to run about 2 miles just to get to a decent hill.

That's all changed recently as I'm remote working from the Sea Cliff area of San Diego...nothing but hills here!

My all time fav run is down Catalina road to the end of Point Loma and back...where I'm staying this is about 8 miles round trip and 500' of climbing. Stunning views though: 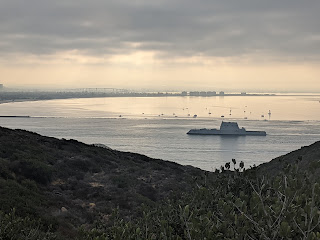 That's some kind of weird Navy ship heading back into S.D. harbor. I've seen Trident subs too. The navy owns most of the land on Point Loma except for the Cabrillo State park at the end. I run early and go through the base sometimes when it turns 8am..and they play the star-spanged banner on loudspeakers in the base area ;) 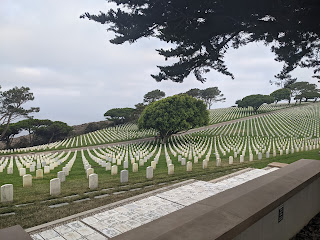 There are cemeteries also lining Catalina Blvd. I was somber and sad seeing them with such stunning views. One day I happened to find a place where I could walk over to them and I discovered, happily, that not all  of them are not for people that died in combat. Many are families with the privilege of  interment at this place due to navy service by fathers. 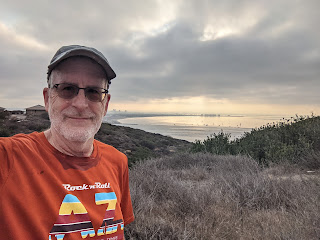 As you can see, the mornings are almost always cloudy and that's great...it's not really cold enough for me with temps around 70F, full sun would make it much hotter. It's also a somewhat humid air (right off the ocean after all) so there's lots more sweating than I'm used to.

The hills do seem to be making me stronger...I've been doing ok relative to others on Strava in my age group. There aren't many people here posting segment times in my age group..usually only 5 to 10.  I'm usually about 4th.

I've taken to doing some 'segment hunting'. That's where you run an easy pace for most of your run and only when your watch tells you you're on a specific named segment do you pour on the speed.

I think that's a totally reasonable thing to do. What is NOT reasonable is to ride a bike on a segment and claim it's a run. I'm told this happens all the time, sometimes on purpose. 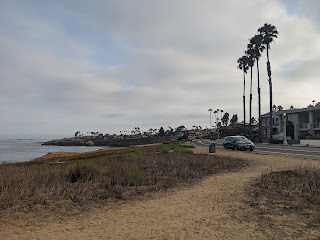 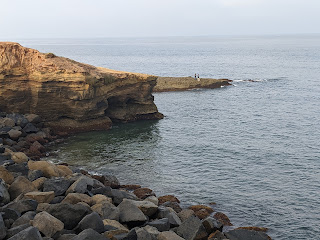 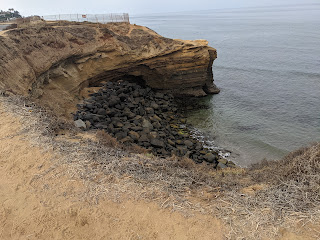 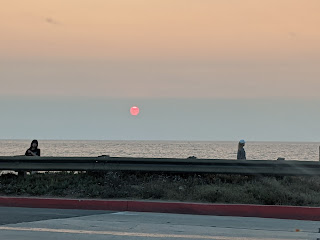