This race was a warmup for my first trail marathon in a long time. My last real hilly trail race was the Big Basin marathon in 2015 (!).  I focused on road marathons for a while after that and then the whole wonky hip wear-out happened...and then  about a year to return marathon capable fitness.


San Lorenzo has very steep hills so I decided the half would be a prudent first trail race and be good training: three weeks after this race I'm signed up for the Golden Gate marathon.

I am excited to do the GG Marathon again: I think it's one of the most beautiful trail races around.

I have been running decent amounts (with life getting in the way here and there as usual) but not doing much hill work (I live and work in flat areas near the bay). So I hit the stairmaster for couple of 30-45 min workouts two weeks prior and also did more hill running.

I've run the full marathon at San Lorenzo twice, in 2011 and again 2012...like most trail marathons you run the half course twice. The basic half marathon course is an out-and-back with a river crossing in the middle. There are 2 pretty steep hills and you hit them out and back:

I was a bit apprehensive about the river crossing: would the water be really REALLY high? (I.e. over waist level?) . I bought a small water-tight box for my car fob just in case..and also didn't take my cellphone.....they take lots of pictures for you on the course.

I was worrying a bit about the downhills: I must not fall!  If I fall on my new hip and break it would be very bad. There are some very rocky sections.

This year the turnout was seemed huge..the start was very congested....nothing but slow walking. The initial trail is single-track, passing is difficult. It took 17+ minutes to do the first mile. 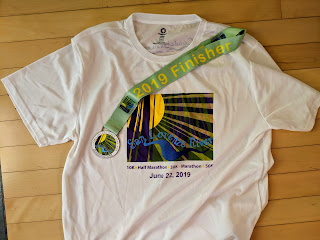 My goal was to keep the HR up in the 135 range and higher on the power walking uphills. I fell shy on the average (133) because of the downhill stretches but overall I was happy with the effort I was holding on the ups. 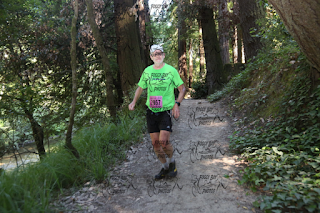 The river crossings were easy peasy..I don't take off my shoes but instead put vaseline on my feet (so they don't get softened by being wet and get blisters) and I sprayed my shoes with water repellent (so they would't get heavy). This worked well.

Overall, I found that the hills were not as scary as I had remembered. When I reached the river on the way back I was shocked that I was there so quickly. ....generally the time passed faster than I thought it would.

Writing this up the day after I'm still sore in my legs but not too bad.
On to the Golden Gate Marathon! 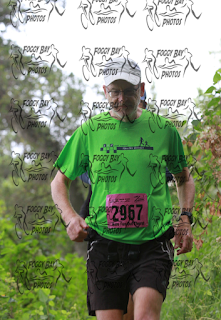