Only 36 miles this week. Should have done about 15 miles more but read on....

On Thursday during the 1 mile warm down post-MP tempo I felt a sore spot on the bottom of my right foot develop.


After the run it was a bit sore right on the forward edge of my heel on the bottom of my foot. I iced it of course and I knew that I strained my PF...that's a first for me. I do have very high arches that are pretty rigid..so I'm a candidate for PF, but this is the first time it's happened and the first real injury in a long time.

I noted that my previous little injury  flirtation a few weeks ago was also on the day of my tempo run. That comes after a rest day but the day before that is speedwork.. it's actually a  pretty tough day..I'm always surprised how much effort holding pace takes.

Being conservative..I didn't run on Friday, I did some tough spinning and strength training. On Saturday my foot felt pretty good so I did  an easy 5-ish and survived that.

Sunday morning my foot felt pretty good....stiff when I first got up for half a minute but then ok....so decided to do 9.2 at my high range easy pace. .this went well until about mile 7 where I started to feel my foot more and more.  Alas, my foot was quite sore after running, more icing done which helped. I bought some rubber heel lifts to reduce the stress on the bottom of the foot near the spot and they help too.

I think I will have to cross train for a few days and let things heal up a bit and then see how things go.

Such is training! If you don't push yourself, how do you know what you can do? I'm not too bummed out or anything like that. I know I'll heal up ......I've been riding the hairy edge of the heaviest training I've ever done so I knew it could happen.

In retrospect I need to be much more careful on the days of the SOS runs: I should not be running only in the Kinvaras despite my love for them. I note that this pair has about 280 miles on them. A new pair is quite noticeably better when they get up that far.

Probably should have switched to a new pair earlier, at least for SOS runs......I will be switching more padded shoes into the rotation too.   And/or I may do my SOS runs on the local (rubber) track to reduce the stress.

I still feel that since I have three marathons lined up I should be able to salvage a good race out of at least the last one...as long as I don't my make injury worse. We'll see.

Halfway there: 9 weeks to go

I wondered how my speedwork session on Tuesday would go.

I felt pretty tired as I jogged the 2 miles to the track  with 6x800m w/400 recoveries on the schedule. But, I did them and I did them all in the same time: 3:45 (7:30 m/m). This is faster than Hanson's says I should be going but I don't find them that bad. These are basically Yassos except I am only doing 6 rather than 10 or whatever he has you doing.

I have to say that running 6 Yassos on tired legs is way more difficult than 10 on fresh legs. I could have maybe done 10, but it would have been killer.

It was also warm for here, 67F, and pretty muggy with high foggy clouds blocking the sun. Quite weird weather actually but that else is new?   I took my shirt off because no sun and then helped me stay cool. The good news is that my HRs are showing that the warmer temps and higher humidity are not effecting me as much. Perhaps that will be useful for Chicago.

We flew to Bozeman Mt for the rest of the week for a wedding and decided to move one of my easy days to Wednesday so that I would not have to run on Thursday, our travel day.

I took it fairly easy since I was tired from the speedwork but felt good enough to do a couple of 10-20 second strides at the end of the run. 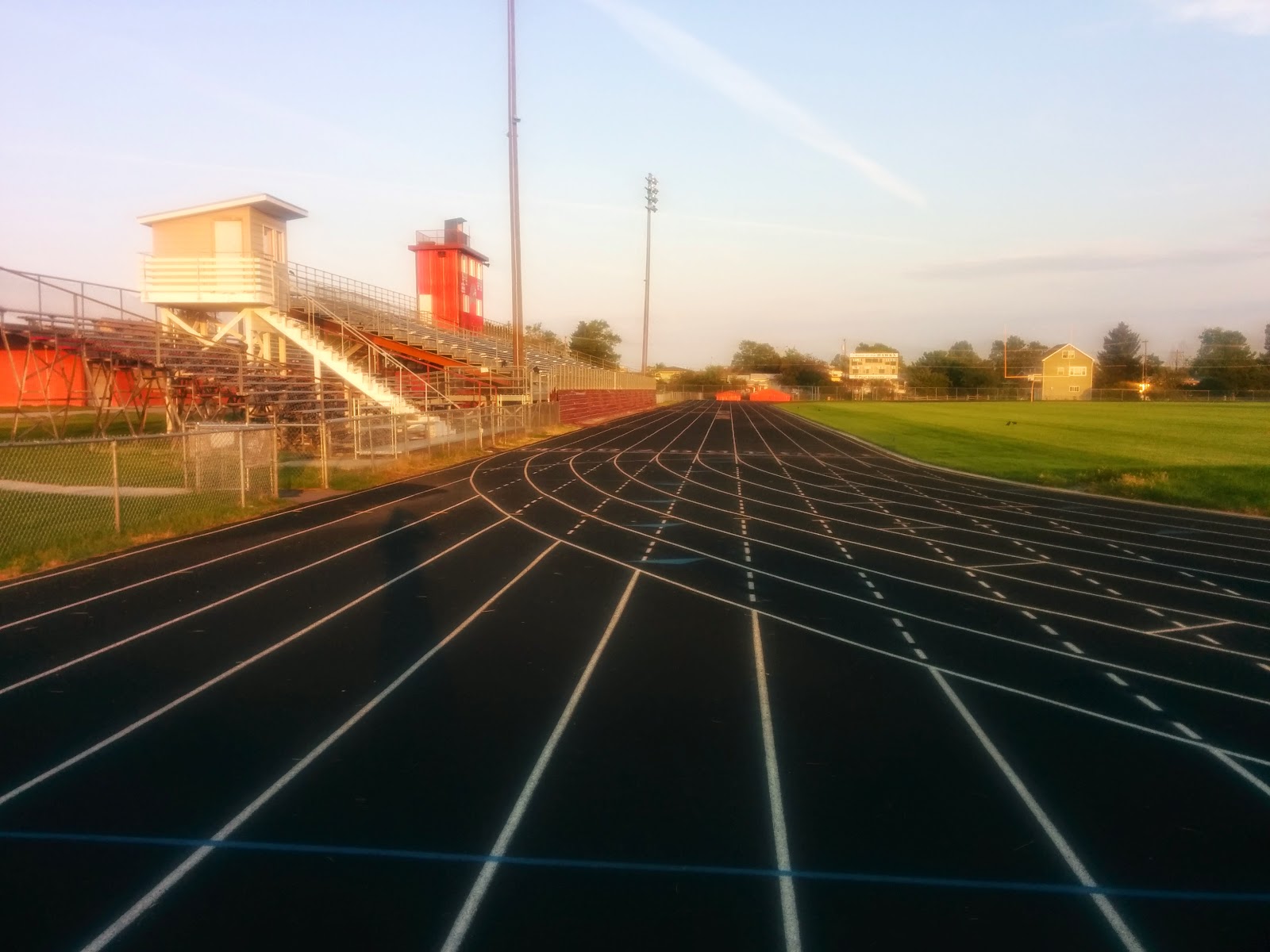 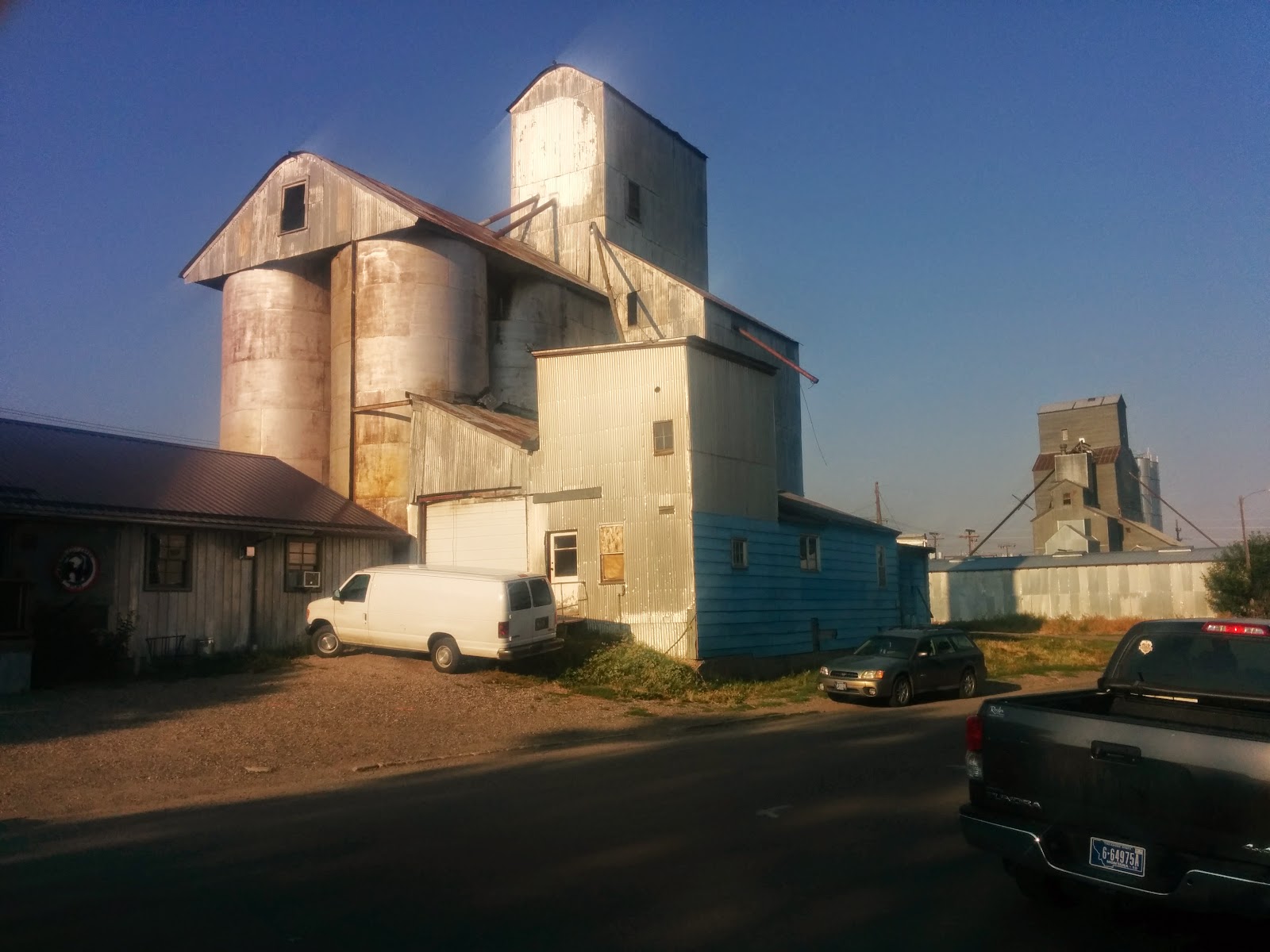 Friday called for  the moved 8 mile tempo (plus 1.5 mile warm up and cool down for total of 11 miles).

I ran to the local high school track (about 2.5 miles) and did 7 miles there, then ran 1 mile of tempo on the road (lots of traffic stops to for walk lights though) and finished up with about 12 miles total.

The timings for the tempo were taken from the lap timing, not the GPS so they were spot on and very close to 8:52 m/m

That was a pretty intense workout  at 4600 ft. There was also about 400 feet of climbing to get to the track.

The next day I did an easy 8, also a lot of it on the track and the day after I had tempo I took it slow knowing I had the 15 miler the next day.

Of course during this time I was also on my feet a lot for the wedding (which was a blast) and partying and such. I tried to keep the wine and beer consumption pretty low knowing I was going to be having to rise early the next day for all this running...but sometimes I probably slipped up a bit ;) 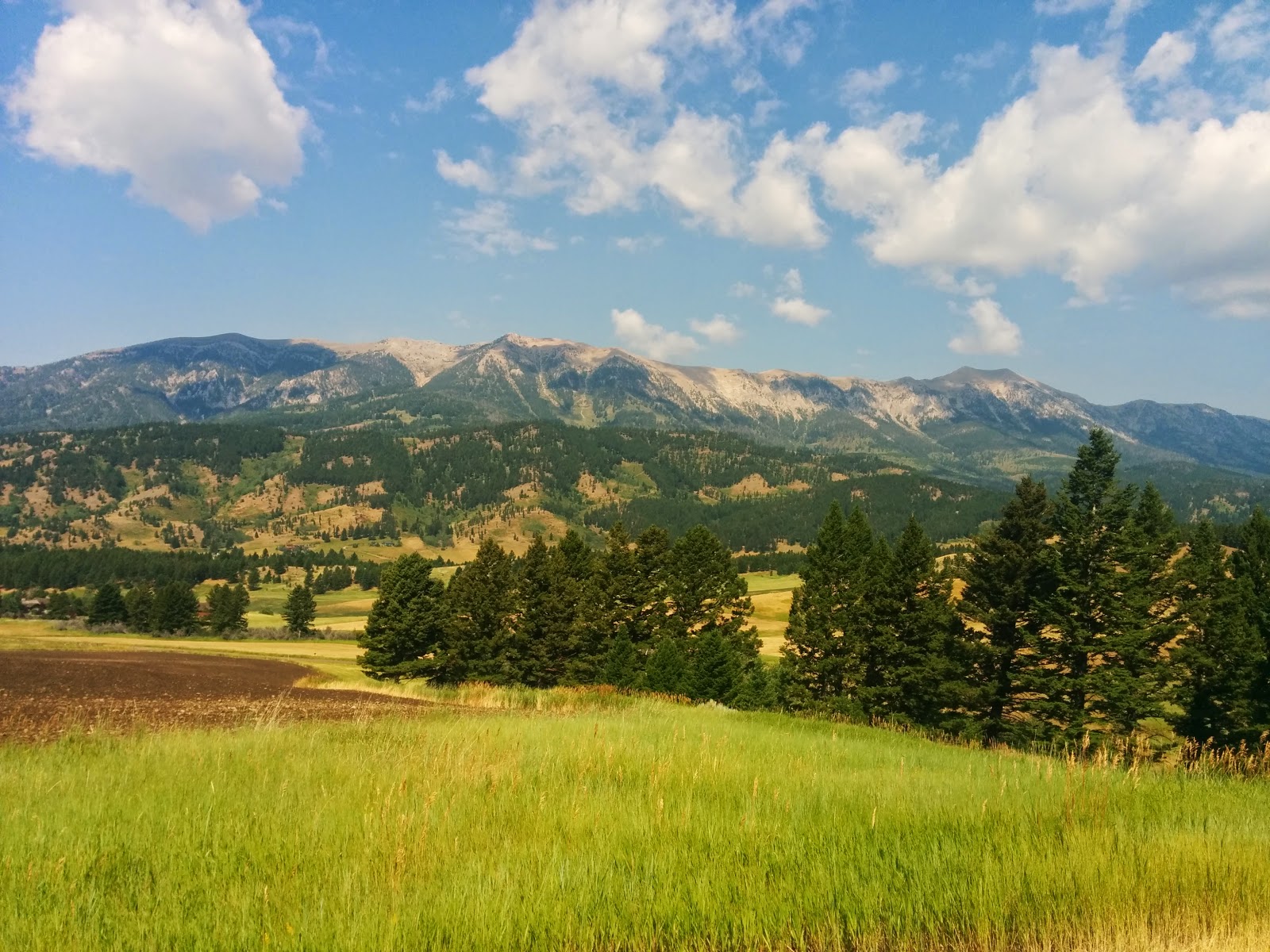 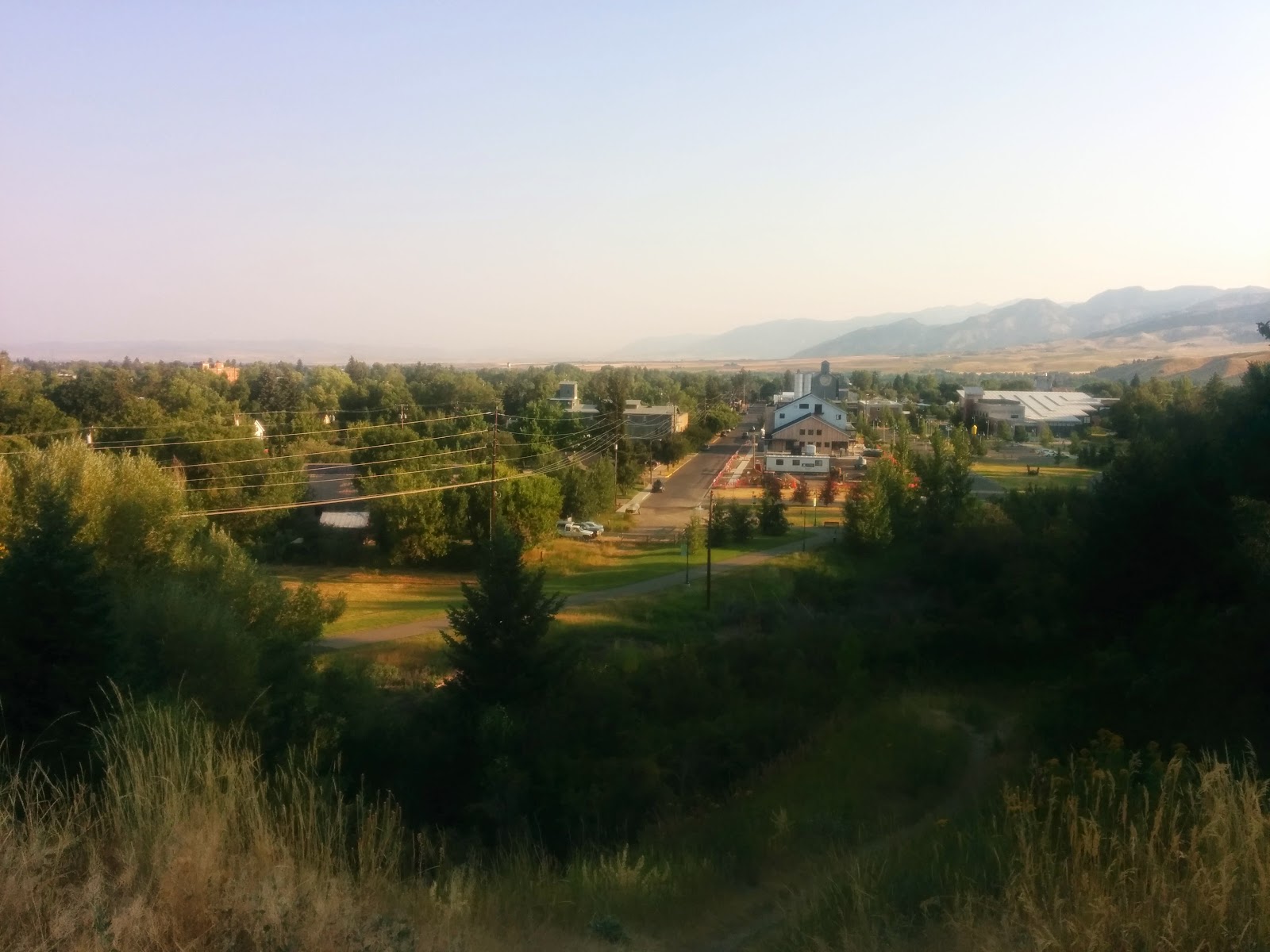 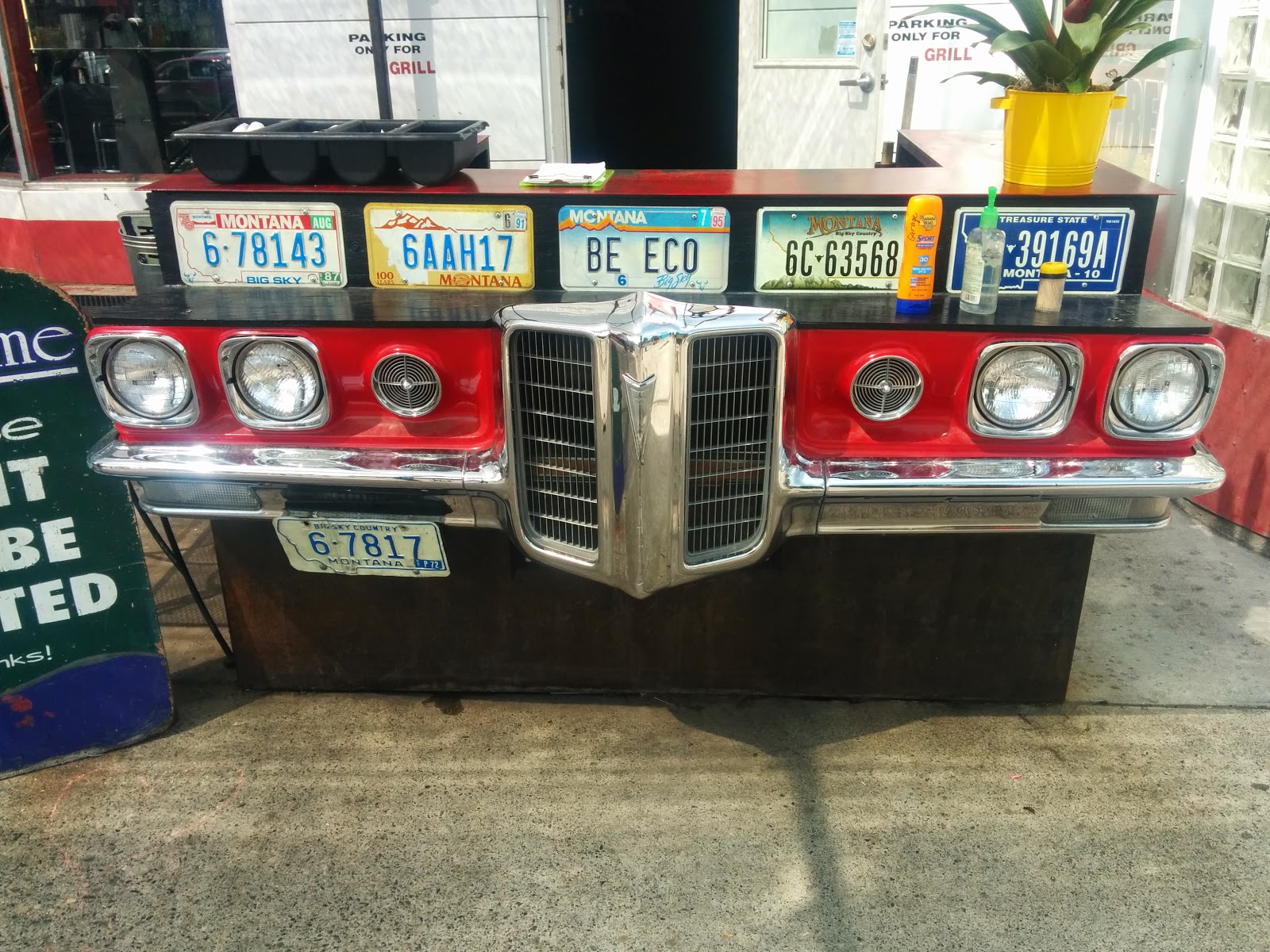 The long run was a bit difficult. I was not able to hold my 9:30 pace what with all the running previously (including the tempo one day closer to the long run than normal) , the altitude, the partying and the slight hills..but I did enjoy a great run all around Bozeman which is not very big and can be toured quite extensively in 15 miles 8)

A pretty high mileage week. YPBs all pretty darn  good...Of course I've learned that the cardiac economy comes for 'free' with training hard and doesn't mean squat about marathon ability in the last critical miles. Hence the Hansons training....I would still like to find a quantifiable metric that could indicate this property during training.

Summary of the first 9 weeks:

The pace this week (10:00) a bit slower than last week due to the long run being a bit slower. But I'm happy...so far, so good. The knee is still "there" but still slowly getting better even after this big mileage week.

I foolishly don't own a travel sized foam roller (and the hotel exercise room had no such thing) so I'm a bit messed up after running in Bozeman, but that should clear up with some extensive rollering.

10 weeks to Chicago...almost halfway through the 18 weeks of Hanson's training.

Here's an illustration of how crazy this year is...a table of my yearly mileage
including partial results for 2014:

In only another month or two I'll have run more miles than in any previous year.

No injuries per se


I still seem to be dodging any show-stopper injuries.  The "inside of left knee" tendon soreness has been going away. I wrapped it and held the wrap on by pulling my calf sleeve up over it and that seemed to stabilize it enough to get ahead on recovery. For the last couple of runs I've stopped taping.

I found some huge trigger points in my left calf ....on the inside near the bone that the foam roller was not getting at. I suspect these muscles are near where the tendon terminates. So perhaps this why it happened?

I got out the "stick" and have been working it...must pay attention!


Helping me survive these huge miles is my (new) electrically adjustable desk at work. I normally get up and walk around every 30 min or so and feel stiff when doing so, but now I can work for several hours a day in a standing position..which keeps my  legs and back from stiffening up.

I can't stand all day long though, so it's nice to be able to plunk down and sit in a decent chair for a bit too.  By the end of the day I feel like I've gotten ahead on my recovery a tad.

This week was a touch easier than last week: 50 miles, not 55, because no long run. Next week we have a 15 miler and 2 weeks after that we start the 3 x 16 mile long runs before the race.


The long and short of Hansons


The "short" long run seems to be the most controversial part of Hansons marathon training. I have to admit I plan to cheat a bit and stretch out the time to 3 hours, which at my Hanson's long run pace of 9:30m/m will  get me about 19 miles.

My only risk is injury or not hitting my strength run paces (MP - 10s/mile) on the following Tuesday. If I can't hit the numbers that will tell me it's too much and I will back off.

I am determined to push myself harder than ever to hit this goal: I'm so close to the BQ limit after years of marathons....there are no easy improvements now.  I need another 2-3%  of fitness and this is the only way to get it.

Even though I am running on tired legs all the time there are still days were I feel full of energy (relatively speaking).  This Sunday for my 10 miler I felt pretty good and did 2 miles of MP running at the end.

I have learned that with tired legs I need about two miles to really warm up. Before that I have to force any faster paces..after about 20 minutes the legs are stretched out and the same pace becomes easy..it's quite amazing.

My weight is still consistently below 168..amazing...not sure why totally.  My morning HRs are totally normal therefore I don't think I'm into any overtraining.  Sleep is super essential. After a hard day I can sleep like a brick for 10 hours...paradoxically also not a sign of overtraining.

Goals are part of what makes running fun for me. Just running itself is plenty rewarding but the spice of having a goal to shoot for and see if you can make it happen is a challenge that I enjoy.

The road marathon is such a bugger because achieving a specific time chosen in advance is fraught with so many things that can go wrong. Especially if the time you pick is known to be at the limit of what you can (or might) be able to do.

Besides picking a realistic goal (how do you do that?) and training to achieve it properly (ditto), everything has to go very close to perfectly on race day.  More times than not we don't seem to get it right... but hey, if it was easy it wouldn't be nearly as rewarding when it all magically happens.

Onward....gradually the effort levels  are ratcheting up...