Well, here we are in Barcelona in mid March. You may ask what am I doing here after running 3 marathons since October, and then not running AT ALL for 30 days (traveling in India) and then getting a cold for one week after the flight home. 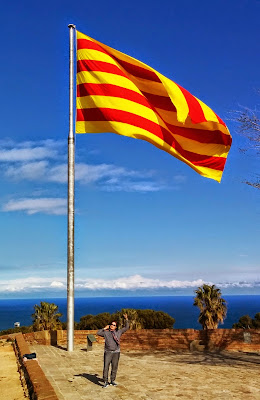 (You may NOT ask why I'm writing this up in May, however ;)

I was left with about 5-6 weeks of running before this race. I was concerned so I decided to really go out SLOWLY and target a 5:00 pace and see how that went. I had a hard time believing I could do the same times I'd done in my three previous marathons (~ 4:47) as I was even less trained now.

I have my running friend Lynne to thank for bringing me to this race. She loves this city and had run the race before and convinced Toni and I to sign up quite a bit in advance. She recommended a hotel that she had stayed at before and it was fantastic. We also got a lot of advice on places to visit.

(Sly Advert: Check out Lynne's E-book on Amazon , the top 25 things to  see and do in Barcelona. It's only $3 and will save you way more than that by knowing the free entrance times for all the places you should visit)

Another added bonus to the trip was that my cousin Ross and his wife Beverly had been working/living in Munich and decided to come visit while we were there!... Who doesn't want to visit Barcelona?

Here we are visiting one of Gaudi's amazing houses. 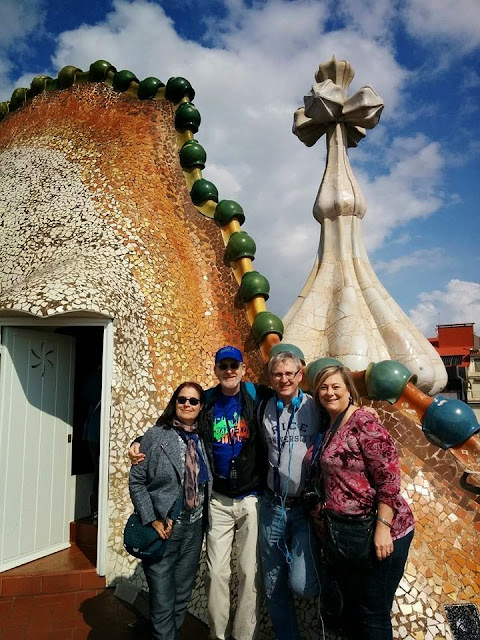 We flew over 3 days in advance and took some melatonin to get 'synced up' and wow, we both got over the jet lag pretty quickly. This is a good time of year to visit Barcelona: no tourists and the weather not too bad...some clouds and rain can happen though. In fact the day before the marathon there was rain and sleet ..BRR. But luckily race day dawned crystal clear blue skies and perfect cold temps (but not too cold).

One problem with Barcelona is carb-loading. they really don't eat carbs much there. It's mostly protein...the seafood is awesome so I guess we just had to make-do with that 8)

Race start is in the Catalunya square, a major nexus point in the city (and a great metro, as is true of many European cities). "Zurich" bank was a sponsor, hence the balloon. Very confusing to have running shirts that have the word "Zurich" bigger than Barcelona. They should back off on the endless logo-plastering a bit. 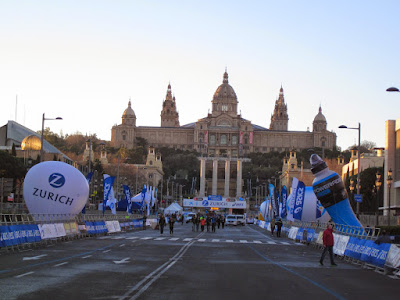 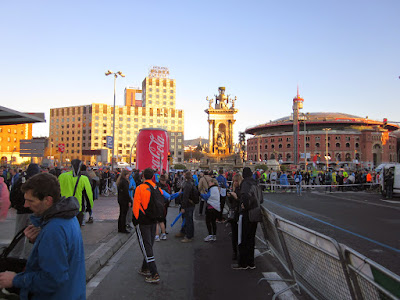 Ok, ladies ..please look the other way. These little contraptions were perfect for us guys to use in the last minutes before the start. 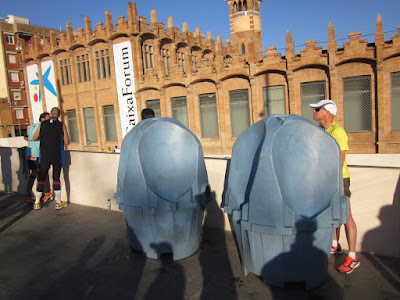 I met these two folks at the back end of the last Corral with me..they were from PA I think (Philly?) and there names were Dan and Jan(?). I didn't see them after the start, I hope someday the find my blog and say hello. Probably wondering why it too me so long to post and gave up 8( 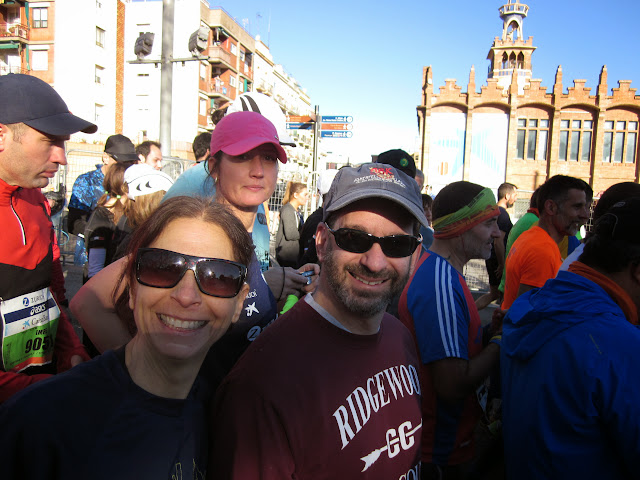 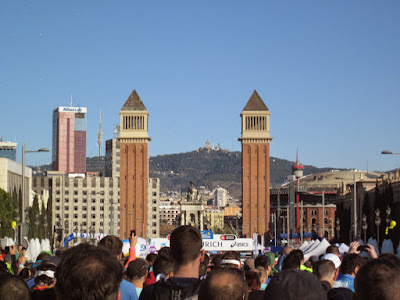 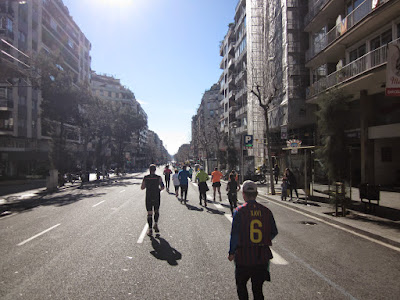 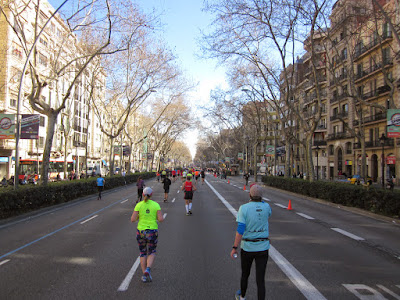 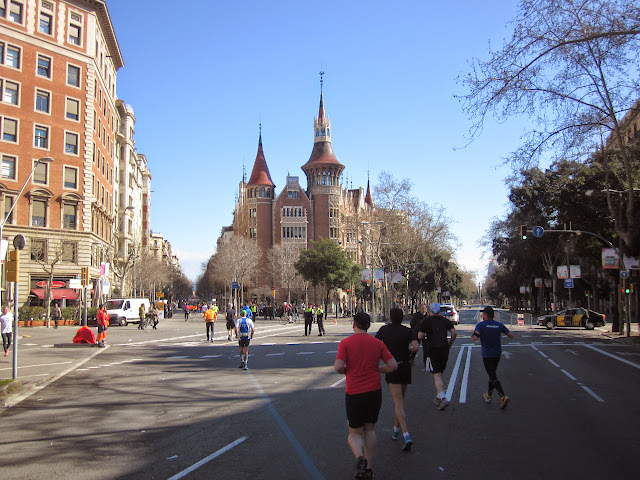 The amazing Sagrada Familia....a Gaudi designed Cathedral that has been under construction for more than a century (!). Should be done in about 20 more years they say. If you every visit BCH you must sign up for the tour (best to get tickets online)! I'm not a huge Cathedral fan but this is one to see. 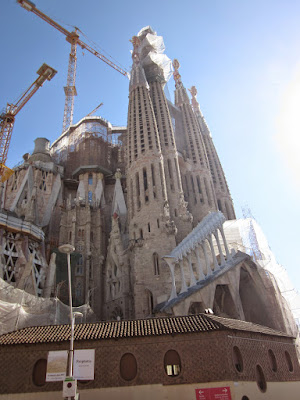 Many many drumming bands on the course. They always gave me a lift. 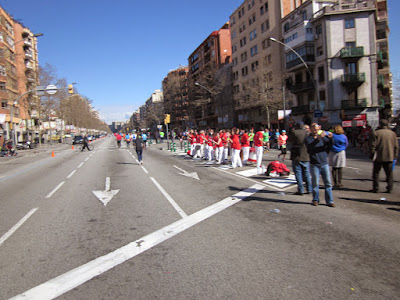 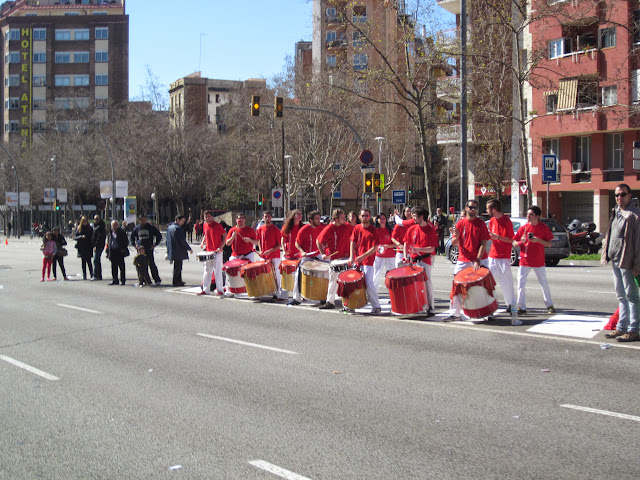 The only "boring" part of the course...there's a highway left of that sound barrier thing and a lot of packed in low-income apartment buildings on the right. 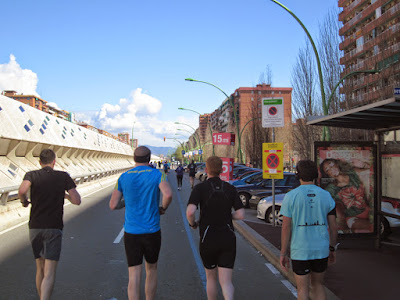 During the race people kept shouting what I thought was "Ringa Ringa Ringa.."..but it was really Vinga Vinga Vinga..and that turned out to be Catalan for "Go Go Go!" 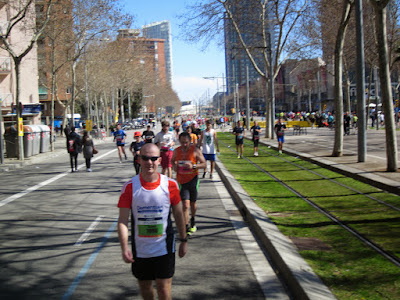 Beverly got this shot of me just before they shouted out my name. This is about about mile 18 and I've just figured out that I actually free pretty darn good. 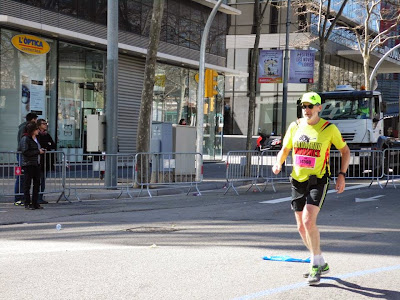 Mugging for the camera..can't be too bad off eh? Maybe it's ok to go a little faster now... 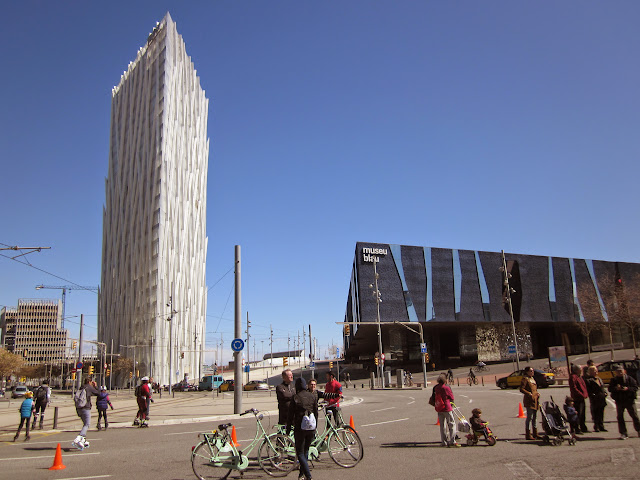 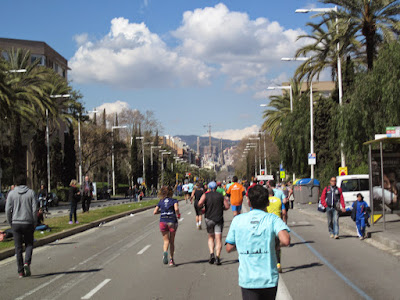 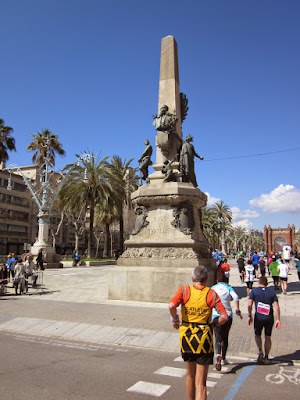 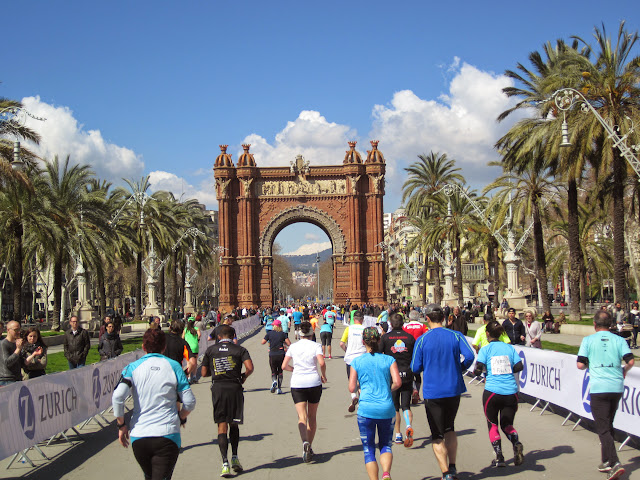 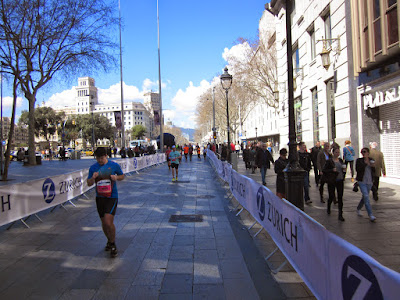 One of Beverly's shots..this shows the finish line area (back at the start) 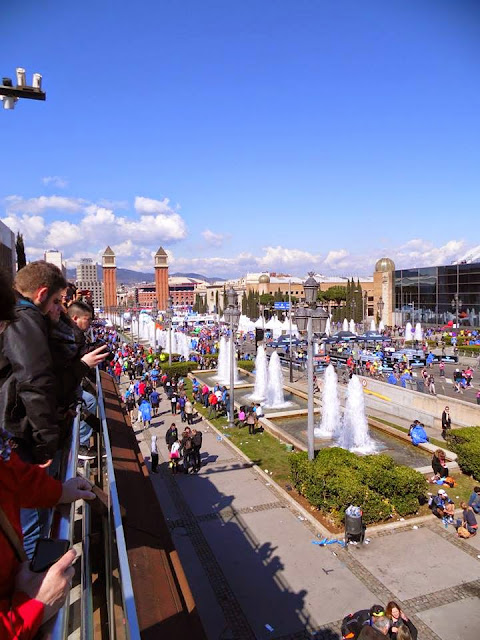 Another one of Beverly's pics...what a great day! 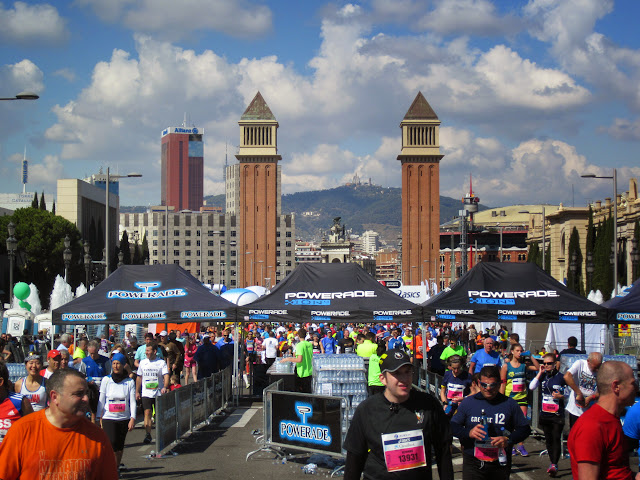