Been healing up from the race...the usual sore quads being the biggest issue, peaking on Tuesday. I got a full leg (and some back massage) on Tuesday and that helped a lot.
On Wednesday and Thursday I did some stretching and fast walking, and then started running again on Friday and Saturday (today). Just 3-4 miles, tomorrow I'll try 8...all at an easy pace.I feel pretty back to normal, but I can tell my legs still have a bit more healing before they are back at their peak.
My  next race is on Oct 17, which is only 11 weeks away. Seems right around the corner but: we have a huge solid base of running behind us, we are injury free,  we are hungering for another PR!
Time to take stock and figure out what to do between now and then!
Things that went reasonably well
Things that need fixing
Posted by Paul on Saturday, July 31, 2010 No comments: 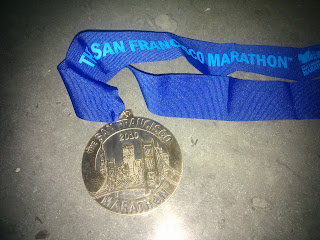 One word summary: Intense.
Warning: this is a long RUNDown. Go get yourself a nice drink before you start reading.
Note: mile splits below are from my Garmin, with some massaging to make up for the different distance recorded (due to me not following the course tangents and GPS noise).
Update: this guy ran the race carring a DSLR and took some really cool shots: 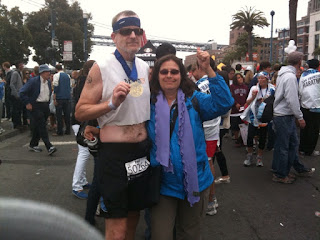 Running with pacers really gave me a lesson in how to push when needed and be really aware of when I tend to slack off. I also think I learned other tidbits about about how to attempt to break 4:00. But more about that in a "lessons learned" posting.
While eating I start texting with Toni and when done I get up (ouch oooch, stiff already) and find her quickly. We see there's a beer garden and Toni and I go in and share my delicious free Fat Tire IPA with her. She takes a picture of me standing in front of a huge shot of the GG bridge etc with the dreaded quote from the recent WSJ article: "The Race even Marathoners Fear" That's the shot in the previous blog entry to this one. 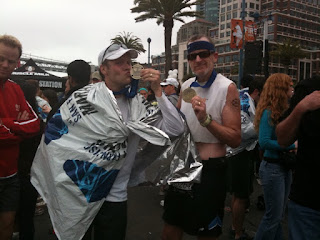 Surprise! ....We run into Steve and his wife Goody and he looks fresh as a daisy. I ask him his time and he's got no idea, since he had no watch and his cell phone died at mile 22.  He thinks he's done a 4:15 (turns out he's really done a 4:02, which is smashing for his 2nd marathon! At least I beat him on age-graded time!). We take a bunch of shots together, say our goodbyes and head for the hotel.
I shower up (Achilles tendons are just fine, thank you, no need for icing) and we head over to Acme Burgerhaus over on 559 Divisadero...wow, that tasted so good.
Next stop Long Beach Marathon on 10/17. A flat course....let's see what we can do there!
You can see from the official splits that I was on a perfect pace but lost 6 minutes in the last 6.2 miles.
Posted by Paul on Monday, July 26, 2010 4 comments:

The weather is looking perfect for Sunday: 50F at the start (my wave starts at 6:02am
Posted by Paul on Wednesday, July 21, 2010 No comments: 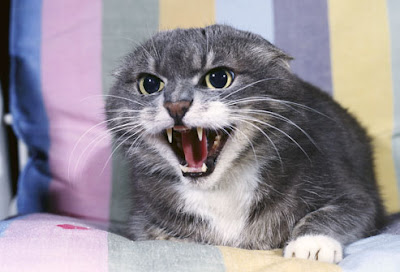 Do Not taunt the Taper Madness Kitty

My last decent run was 8 miles on Sunday...did the entire thing at race pace and it was easy peasy...a great feeling. I could feel the gathering strength from the taper..and my breathing often dropped to a 3-3 cadence rather than my usual 2-2. All this is good, but of course no proof that we won't have a strong fade after going out so fast (for me).

It feels good to run like that, but you can tell it takes more energy, and so it's a bit scary wondering if you really can do it for 26.2.

Today, I ran a totally minuscule 2.1 miles (10:14 pace)..just to keep in the stretching routine and warm up the legs...and frankly to keep from going total bonker-bananas-goo-goo-ga-ga from taper madness.

Tomorrow the schedule allows us 4 miles and that's basically it until Saturday ....we get to trot for a mile or two..whoopdie-do!
Posted by Paul on Tuesday, July 20, 2010 No comments:

SFM: The last weekend before the race.. 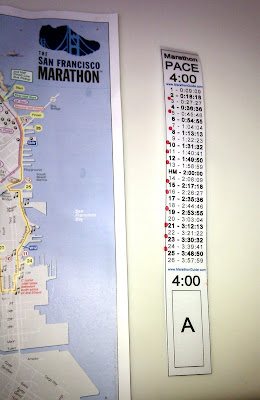 Well, here we are on Saturday....the race is one week from tomorrow. I've dialed way back on mileage and so start to feel stronger and stronger as the legs bounce back from the heavy training load.

Today, a short 4 mile run at marathon pace - 10 sec/mile (8:56). I felt really good...granted it's a very short distance..but it better feel good if you're going to hold that pace for 4 hours plus.

So... a good feeling...a greyhound ready to run!?.. I do have some grey fur but I prefer spaghetti to kibble :-D

These last few runs are where I sort out all the stuff I need during (and before) the race. I'm not talking about fashion...more about function. (Although I have a couple of suprises in the fashion department.... I will unveil on race day).

The photo shows something called a "pace band"..you wear it on your wrist. I've made one for my target of 4 hrs, and it shows the times I need to hit for each mile. Very useful ..doing arithmetic in your head gets pretty dodgy after 10-15 miles of running. I've marked red dots on the band to show the approximate locations of the water stops...useful to know since eating GU works better when there's some water to wash it down.

Generally, one of the things I really like about running vs a lot of other sports is the minimal amount of "gear" you need: shoes, socks, shorts and a shirt.

But of course, there are a few other things, e.g. sunscreen, a pouch to hold gels, pins to hold race number (called a "bib" for some reason...perhaps because runners are so infantile about themselves..hmmm?)

It can really mess with your head to forget something important, so it's good to have a list. Here's my list... did I forget anything? It's all about being totally prepared (and hence relaxed) on race day.

Oh Jeez...This article isn't helping. I WILL PR at SFM. Luckily I've run the half once and the full once so I know what I'm up against. It's not really that bad.

Two more weeks to go....Toni and I spent the long weekend up at Crater Lake, Ore. No running up there but several miles of hiking with 3x700' of climbing.

Even though the miles are tapered down, I did a lot of marathon pace (or a touch faster) this week....about 11 miles of it.

Breaking in my new Nike Pegasus - 27 shoes..man they are a fine shoe! Wish had dumped the stupid "Zoom Vomero 4's " a long time ago. Kudos to the clerk in the Bill Rogers running center in Boston that mentioned I might want to try a less soft shoe to help with my achilles issues.

The other reason I switched shoes, is that besides being a firmer shoe, the heel area on this shoe does not have a rigid plastic heel cup. Since I use a slight heel lift, my heel gets jammed up into the top of this cup and rubs there, making for more tendon inflammation.

It took me about 9 months to finally figure this out. The Pegasus is also about 2.5 oz lighter and is cheaper to boot!

Plenty more short runs to finish loosening the shoes up.
Posted by Paul on Sunday, July 11, 2010 No comments:

This week's mileage (as you can see on my new logging widget if you click back to the week ending on 7/4) was low-ish (39) but tough.

Wednesday's run was a hill run, 4 x 2 miles of the run is a loop course with about 120' of up and down....it's a very similar feel to a lot of the hills on the SFM course. I ran this at marathon pace.

Today's run (Saturday) an easy 12....legs need a break now, I think we are pretty peaked for this race (first time the training has worked out so well).

This week I took my resting HR sitting at my workstation during the day and got 46. That's the lowest I've ever recorded.....usually it's 50-52..sometimes 48. So more evidence that I'm well trained (?).

Signed up for the Long Beach Marathon (Oct 17th) and the Surf City Marathon (Feb 6). Along with the SFM, this is the "California Dreamin' Racing series"....complete them all and you get a cool jacket. Wussies get away with doing half-marathons...but not me..I'm doing all fulls 8)

Looking forward to a break over the holiday weekend...no running, just some nice hiking with Toni!
Posted by Paul on Saturday, July 03, 2010 No comments: