I ran this race at 8:15pm. The first race I've run NOT in the morning...and on a weekday no less.

Below is the course, you can see the levy with water on both sides (and lots of birds at some times along there)...a bit over 2.5 miles on dirt and the rest on pavement. Mile 5 you  are back on the pavement! 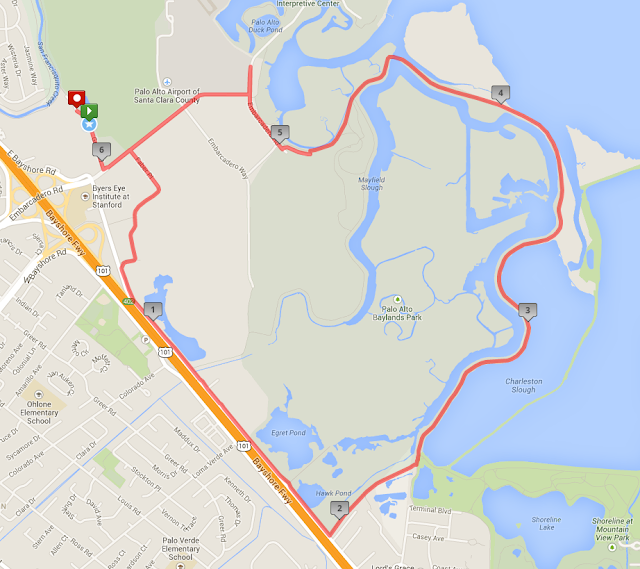 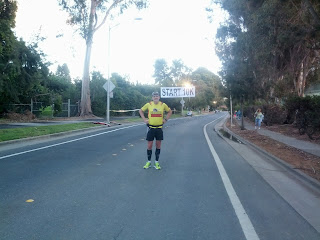 Toni decided to do the 5k walk which was the first event. We parked on the west side of the 101 and walked over the bike overpass and down to the athletic center to make sure we could leave without parking crazyness. 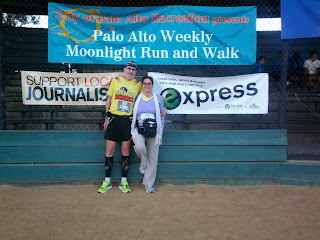 A coworker we ran into took our pic together. This race benefits a bunch of non-profits in Palo Alto. 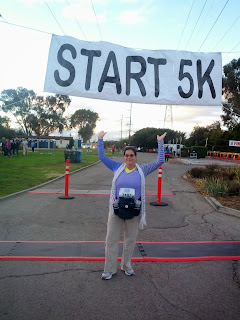 Toni is ready to go..but sun not down yet. 5k not much of a challenge for her, she was the one that got me to sign up for the 10k and so I guess she felt she should have something to do as well ;) 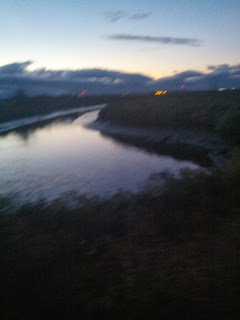 This is a pic from Toni of the river along the levy for the 5k walk. I run this trail all the time but never in the evening. 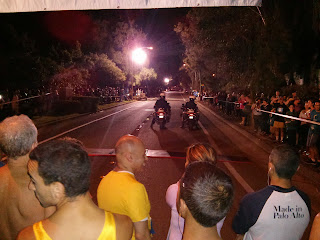 Here I am at the 10k start...first time I've been behind motorcycles! Well, at least for a few seconds after the start.

Seriously, there were a lot of people at the start that were slower than me so I felt no guilt getting up there.


Toni's 5k walk started at 7 and ended for her before 8pm. I gave here the bag with the long sleeve shirt booty and went to the 10k start.

I had met a nice guy, Roland, a Stanford Radiology prof, originally from Austria, that was wearing a SF marathon shirt. It was fun to talk about marathons, etc as we waited for the start.

My plan was to run about 7:50 m/m and hope to shave 5s per mile off my previous best. I had one gu before the start. I ate a partial bowl of cereal about 3 hours before the start...no normal dinner for me.

The race started on time and off we went in a frenzy. I had my Garmin 610 set up to show only two numbers: average pace and this lap's pace (1 mile laps). Right away we saw goofy numbers like 6:30 but I slowed right down a bit and settled in at my 7:50-ish goal pace.

The crowding was not that bad! I was not bothered too much. I did wear a headlamp just in case as about 10% of the field did. We did have some cones to watch out for and posts and things but people were calling them out.

Hit the first mile in the 7:50s and was happy. Lots of young folks were yakking and joking. I was already doing 2:2 breathing and NOT talking. I felt good but this was not a walk in the park but a serious effort.

Another older guy blew by me at the end of the first mile....he was really breathing hard! Annnd of course we passed him back looking not so good at about mile 4.

at about mile 2 we got onto the levy and YUK. Even with the headlamp the slight ups and downs of the dirt track were impossible to see. ...no depth perception! I eventually settled on toe-strike as the best way to have some give...else I was struggling with the footing too much!

The effort seemed about 10% higher doing all this.

Soon we had a great view of the full harvest moon playing cat-and-mouse in some lines of cloud out over the water. Wow. Amazing. Sorry I don't have any photos of THAT.  I passed a couple of 'plugged in' people listening to their tunes that seemed to be ignoring it.

The crowding was not bad but there were the usual doofus people running 4 abreast, etc. After about mile 3 all the chatty cathy types were silent and we could get down to business.

I kept cranking out the 7:50's, and even got a little faster. It was not "easy" but I was feeling like I could sustain that pace for the whole distance without too much pain...my plan was to speed up in the last two miles if I could.

My watch was my cattle prod. If I saw the lap split average pace flagging I would concentrate on my form and cadence until I got it back in line.

For most of miles 2.5 to 4 I was by myself with somebody in the dark about 40 feet in front of me and nobody behind me that I could hear.

By mile 4 I knew I had a PR in the bag. I was hurting but not too bad. The big question was how much could I speed up in the last bit?  Come mile 5 we got back on the pavement...BLISS!  I started speeding up then a bit.
Here's the raw splits:

A 5th place in my age group..not too shabby. First time I've been that high in my AG in  a road race....the 4 guys ahead of me were all super speedy 45, 46 minutes. After me were a several 49 minute folks (including one 2s behind me!)

I think with 10F cooler temps (it was in the mid-60s), no levy running but good pavement, better tangents and some proper 10k targeted training for a few weeks earlier I could shave another 30s off this time.

This race was well run with many, many good an enthusiastic volunteers. I would do it again!