This hasn't been the best buildup to a marathon I've had but I don't think it's been the worse, either. My calf pull dropped my mileage for a couple of weeks and then I had to stop running for another 2 weeks to heal it up.

As you can see, the red entry is where I re-pulled  and aborted and decided not to run for at least 2 weeks and possibly right up until the marathon. I did a lot of cross training and worked very hard on getting rid of my trigger points during that time. I did a test run on 9/13 and I seems good to go. I gradually pushed up the miles and paces and everything felt great.

So, with such low mileage I pushed the miles right up until today..logging almost 40 miles in this last week..with a fair amount of at at projected pacer marathon speed for Lynne of 9:44 m/m or faster. (4:15).

430 miles for 4 months isn't that great but its about what I was averaging during my year-of-8 marathons so I'm pretty sure I'm good for that 4:15. There aren't any 20 miles long runs in the final weeks but there are two full trail marathons further back there plus some 13+ mile runs. It takes a while to lose the long run adaptation so I think I'm good to go.

Here's a graph of the mileage vs time: 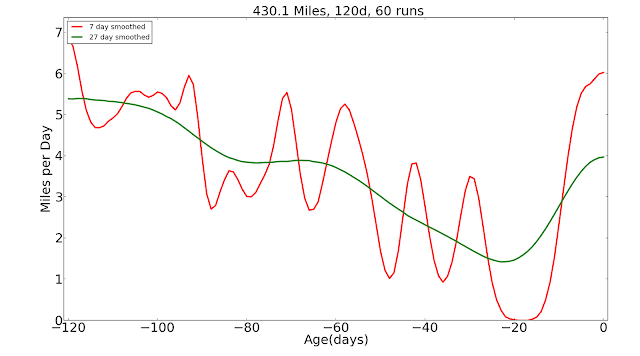 You can see my gradually decreasing monthly average mileage (green) with weekly spikes of short / long (red) but you can also see the last two weeks of hitting it hard.

Here's a graph show the mileage and heart rate mix for all the runs in the last 120 days. You can see the two trail marathons on the left side sticking up, the two weeks of 'downtime' (clear space) as well as my finale of 7  runs. There is some decent color in there...mid and high base pace stuff. 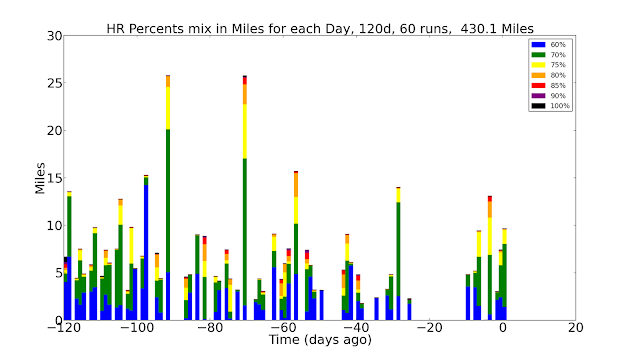 From this point on, it's a one week taper  lots of walking during our few days ahead in Berlin..maybe a light jog or two at most. The weather is looking cool and a few sites say possibility of showers, but some don't.

I don't mind the rain but it will be a bit of a bummer for our spectating friends. Hopefully it will be minor or non-existant! I am very glad it will be below 60F!

My connection to Berlin.

I was born in 1955. One of my earliest memories (because it was so traumatic) was the departure of my dad from my life for a whole month! Or was it longer? It seemed like forever.

Why was he going? My dad was an antenna engineer and worked for a company called Transonics. Transonics got a contract from the government to install an early phased array antenna on the roof of the Berlin Tempelhof airport. This part of the airport was originally designed to be 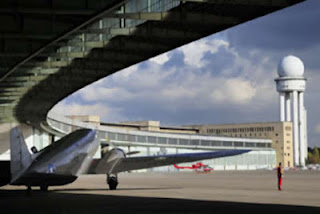 usable as grandstands for Luftwaffe airshows. My dads project was to line the roof with a bunch of antennas. The point was to prevent jamming by the Soviets as they did during the Berlin airlift...making things very dangerous for the pilots in bad weather.  He joked the navigation beams were going to be powerful enough to 'warm up the pilot in the cockpit' on final approach. 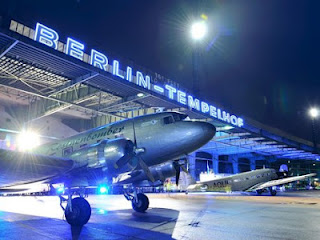 My dad sent us postcards while he was there and described the life he saw. The people were very friendly and I know it was late fall because he described the street sweepers out every morning and even sweeping away the light dusting of new snow. He tried to learn a bit of German and the German people were very happy when you tried to speak their language.

I still have those postcards someplace. I do not have the super nice wind up toy VW bug he brought me (long since broken), but I know my sister still has a really neat cast iron coin bank he brought her as well as some other things.

In 2008 or so Templehof airport finally  closed and the space is now used to host special events, such as conventions.

In 10 days, it will be hosting the Expo for the Berlin Marathon, and I will be there.

As I mentioned in my last post, I'm back running. I seem to be doing ok. Normally I would be tapering but actually I'm ramping up a bit since I've not been running for two straight weeks+.

Saturday I did an easy 5-ish and felt just fine, so Sunday I decided to go for 9+. It was warm when I went out in the afternoon by Ca. standards...70F and 60% humidity with pretty much full sun.

it was a good run..I had no issues with the calf. I did find a trigger point way up near theop the previous night which I rolled with the stick and that made it sore a bit but on Sunday it was ok..doesn't seem related to my previous problems anyway.

The heat did not bother me as much as it might have in times of yore. I went out saying I should stay under 9:44 m/m (4:15 pace) and did that. I felt like I could have done another 10 but a full marathon at MP would have been tough at that temp and humidity for sure. Hopefully Berlin will be cool on race day...different weather sites say different things so far.

So, luckily, I'm feeling ready for Berlin...yay! ..so far so good! I will continue running at MP or slower and rack a few more  miles before we leave. This should be my taper but after two+ weeks of only XT I think I'll be better off with a few miles down before race day 8/. Nothing too long or fast though.

I bought a couple of cowbells from cowbells.com for Toni and Latimer (Lynne's son)  to use during the race. They don't seem to use cowbells in Europe (except for ski races which is where the whole idea come from  !?)...so this will make it easy for us to find them..a very distinctive sound!  8). It may still not work with 1,000,000+ spectators out there during the race 8).

Back running it seems...and a "Cooling Glove?!"

Finally back on the roads running this morning! Felt great but I kept the speed slower than 10 m/m and did 4.7miles. No niggles or anything. All the XT and the time off running has left me feeling rusty for running but full of muscles 8)

My bro-in-law sent me this article about cooling and fatigue recovery...these guys seem like they are really on to something! Check it out:

Just a quick update. I'm still taking it easy and just doing massive amounts of cross training and no running. I feel good....and really really want to run but no point risking re-tearing the strained calf area so holding tight at least another week. I will probably start some exploratory runs next weekend.

(I'm not worried about running 4:15 with this training gap. I should have plenty of fitness for that.)

The other day The Berlin marathon emailed everybody the fancy pre-race brouchure ..they are very organized.

In case you didn' t know, this marathon is HUGE. There will be 40,000 plus runners! (Gulp). And these runners are FAST..take a look at this part of the start/finish map that shows the corrals: 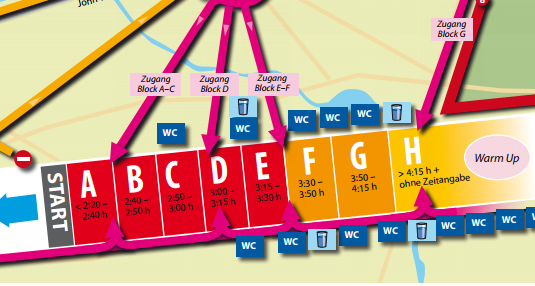 My PR pace would only get me to corral "G" !! I will not be attempting a PR but will be running with Lynne so we'll be in the LAST Corral: "H, just ahead of the "Warm up" area. 8/

I read some blog entries on this race and it is indeed wild crowed support and lots of action all the way. In fact it can be hard to find the water stops in all the signage and people!

On Friday, Lynne and I are meeting with an experience Berlin marathoner friend of hers to get a tour of the start finish area in the park. It can be quite large and confusing so that will be great.

Weather this time of year should be cool, but this week they have had some 80F + high temps..hope those stop soon!