I've been continuing my high mileage base building before I start the 18 week Hanson's program. ( 4 more weeks until the official start). It's been tough, not because of the running but finding the TIME for the running.  This week I managed to get it done:

Friday was pouring outside and I just could not summon the gumption to run outside. The treadmill was so boring though I only managed 3 miles before bagging it and just doing some strength training.

I promised myself to make up the lost miles though, and I did that well..cranking out 27.7 in the next two days for a total of 61.3 miles...a new record for me.

I am finding though, that despite my best efforts things do come up that make it difficult to get a full 10 hours of running in each week. Here's my scorecard for the last 90 days:


The entries in blue are when I started trying to up my miles.  Here's a graph that shows the miles with different smoothing. 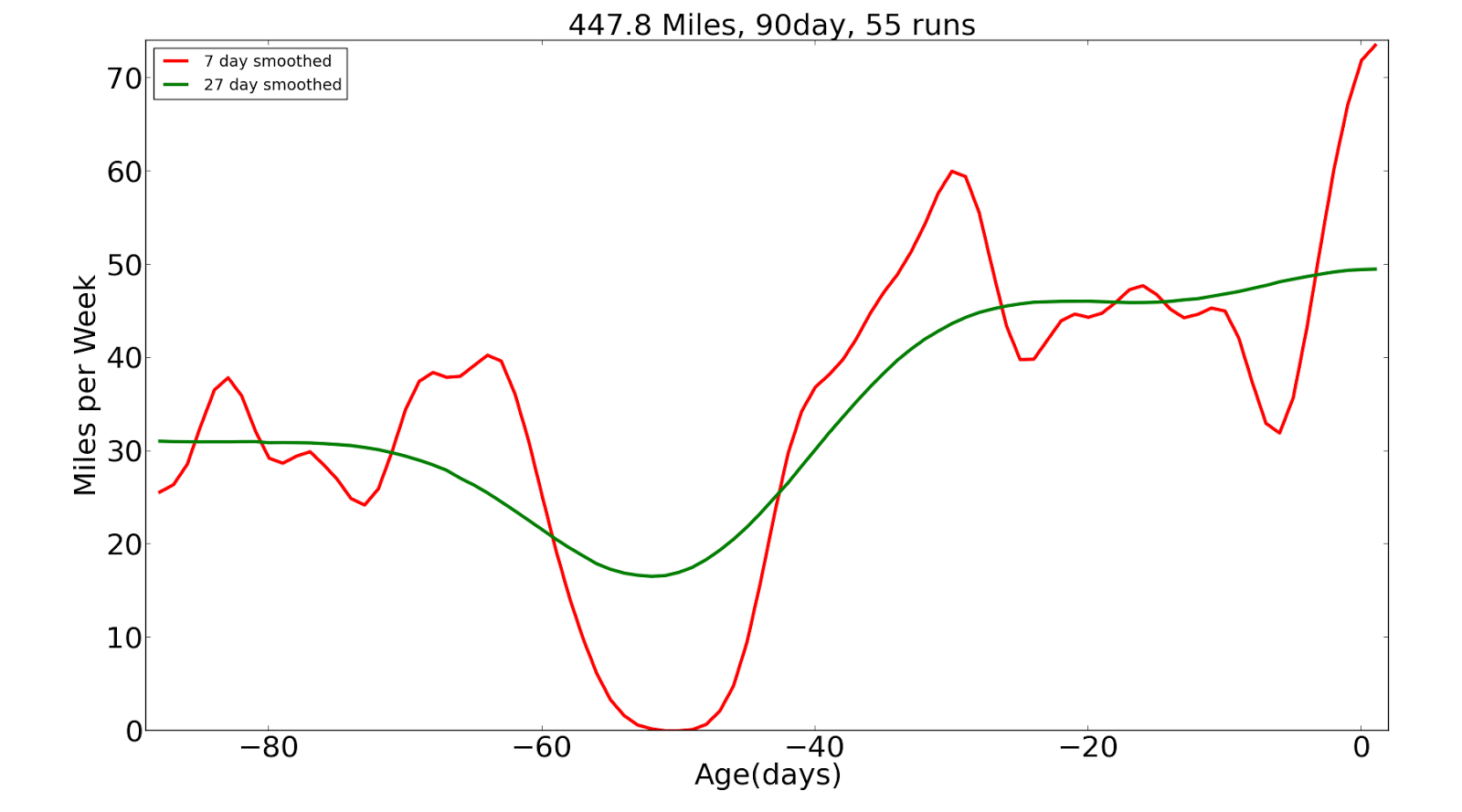 The (green) smoothed weekly average is going up....hopefully it will continue.  I've been keeping the average pace down but have some a few higher quality things in there: 400s, a couple of hill sprints, some drills, etc. I try to do something on almost every run.

One of the fun events of the last few weeks was a trip with friends in Yosemite. We did about 7 miles of hiking with medium up and down and got lots of beautiful views with very clear air.

The photo below shows  the gang on top of Sentinal Dome (Half dome behind us) see how far the view goes behind us..on and on into the distance! 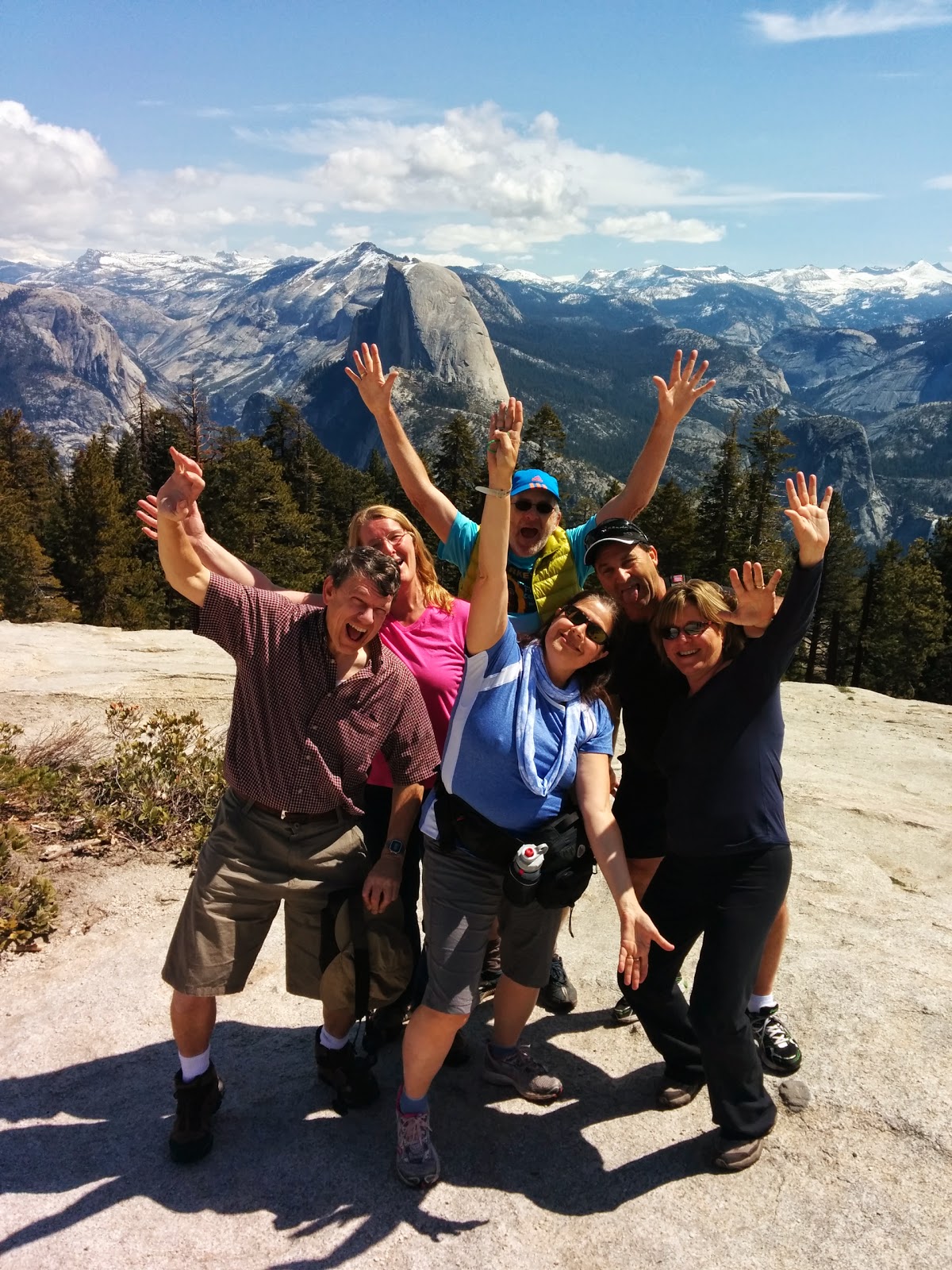 Yosemite falls..lots of water in the springtime! 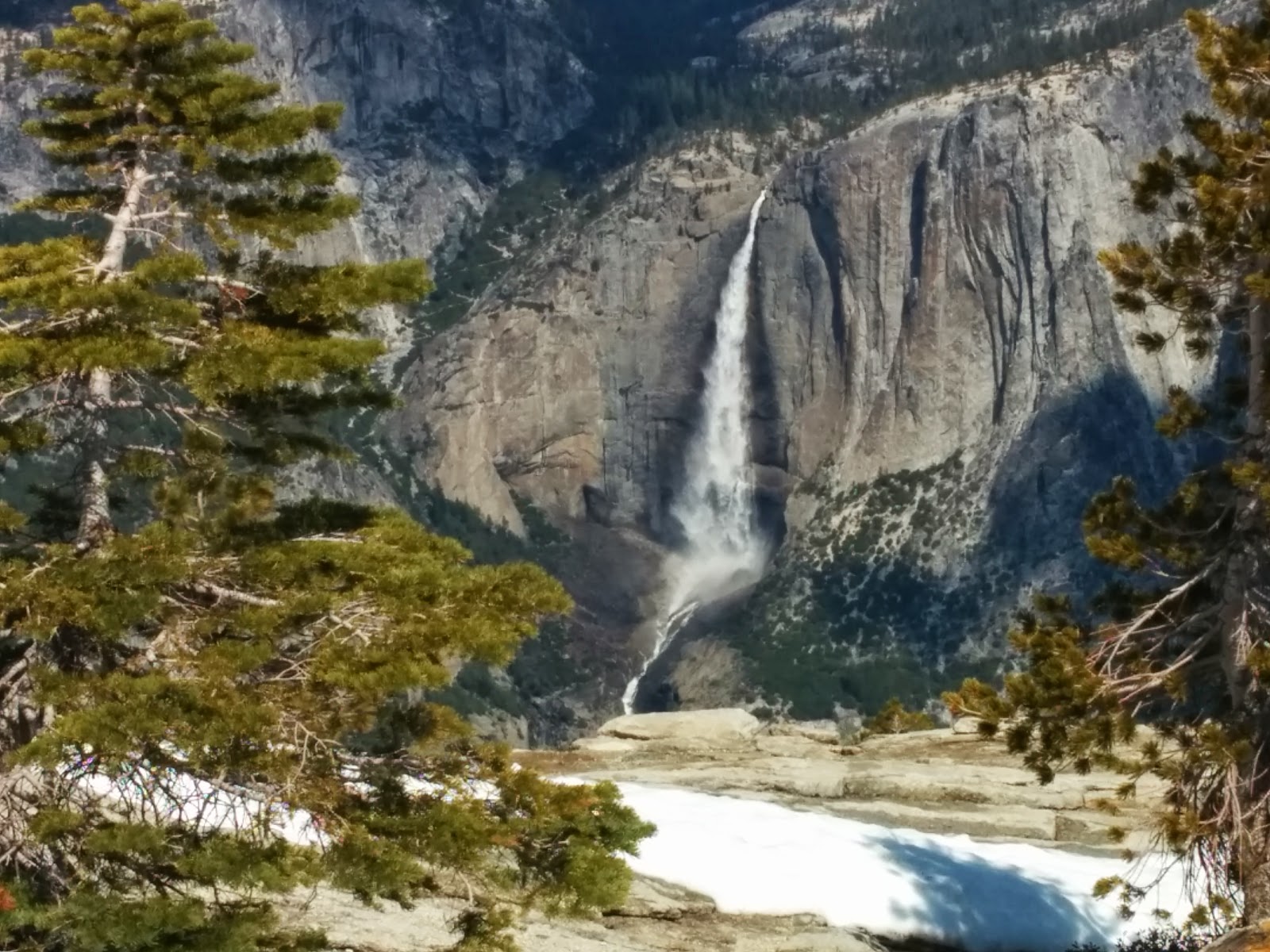 Taken at Glacier point, a  panorama of the entire valley (half dome cut off, alas) . This really needs a big display to see properly! You can see yosemite falls on the left, the royal arches in the middle, and Nevada falls on the rightmost side. What a day!

Recently and old friend from high school days came out west for a job, and we managed to get together to reminisce..especially about one of the most fun things I have ever done.

In 1972 a guy named Jack Lambie wrote an article for Soaring magazine (my Dad subscribed) and published a set of plans on "how to build your own Chanute-style hang glider"..he called his design "Hang Loose" (hey it was the 70's ;)

When I saw that article, I knew instantly I had to build one. I can remember sketching ideas for such craft since I was in 5th grade. (some like the bicycle powered one in a Merlin Jones Disney movie I really liked)

So I ordered the plans (see pic of cover below) Carleton and I built one. On one of the days of testing we happened to get photographed and interviewed by the local newspaper. (I think the reporter was just happening by at the time) I have kept a clipping of that photo (as a png of course) ever since. (See below)

Unbeknownst to me Carleton had the original copy of the plans! So I have scanned them in too and it is fun to remember building the thing.

We had to make some changes to the design: for one thing we could not get bamboo to make the ribs. Instead I cut them out of 1/8"  plywood, about 1" thick top to bottom and mounted the ends between two pine blocks. Heavier than the bamboo but a better fit to the shape for sure.

We also could not get the yellow pine that was suggested and used spruce I think ..but it had some very small knots in it that did cause a problem at one point. (Spar failure in flight! )

At the time, I already had a sailplane pilot's license (you can solo at 14 and it was cheaper than flying power planes) and of course I had flown a lot of model airplanes,
so I was elected the test pilot. You can see me in that photo with my leg out  to move the CG (center of gravity ) forward a bit.

The angle of the tail was not set properly so I could not get the angle of attack enough and basically just fell down with the thing. After fixing that back at Carleton's house (right across from the field in the picture) it worked great. We both flew it many times down a little 20' grassy drop-off.

The feeling of the glider lifting you up as it gained speed was AWESOME. Probably the most fun airplane I have ever been in 8)

You could not really turn the thing at all...too much stability in roll. We talked about adding some tip-dragger rudders or ailerons but the flight times were short enough you didn't really need any left - right steering.

We had a few snafus but by never flying higher than it was safe to fall we didn't get hurt. Spectators would offer to hook us up to their cars with a rope and and tow us ...but we were too smart for that ;)

I'm running Chicago! Got through the lottery!

So my first BQ attempt for the year will be there and if the weather or other factors don't work out I'll run slowly and CIM will be the BQ attempt.

It will be fun to run another 'major'.

As I mentioned, I'm planning to use Hanson's marathon method (advanced schedule) and so to that end I've been racking up slowish miles, moved to 6 days a week of running (when I can), and otherwise trying to get ready to start tough training!

Here's the stats for the last 4 weeks:

I have been racking the miles as much as possible ..the 36 mile week was due to time constraints. Sigh. The last week was also difficult  in that regard but managed to squeeze in 51 miles in only 5 days of running. So far, I'm holding up ok.

I have been forcing myself to run more slowly...ignore pace and I'm doing well at that.

Hansons has you doing very high mileage and the only way you can survive the hard workouts is if you learn to run the other workouts 1 to 2 minutes off marathon pace. ..which is crazy slow.

But what's the point of 'winning the workout' ? I want to nail the race.

I totally get this after doing 60-51 mile weeks!.At first it seemed crazy slow, but after your legs get tired it's quite difficult.

Teaching your muscles to crank out the miles when they are tired is what I need. It's all about building fatigue resistance.

On Sunday, for various reasons, I ran 17 miles around Lake Merced in San Francisco. This is the same place I ran the second day of my marathon double and I had a good time there remembering that and also enjoying the sights there..people out and about and walking and running.

A funny thing happened to me on one of my runs last week. I was stopping at a light in downtown Palo Alto. A big gangling slightly chunky guy, probably about 40 yrs old, came up to me and said " Pardon me sir, but do you mind me asking how old you are?".

Good for the ego, that.