Running higher than normal mileages continues to go well. Last week (in blue) I 'only' managed to log 42 miles....but it was worth it as we spent the weekend in Pacific Grove on the coast.

I managed a 6.9 mile run on Sunday by running early on the coast and it was beautiful. It was a slow run however as I was feeling pretty hungry and out of gas. One thing I have noticed doing these high miles is that if my diet does not have enough carbs for a day or two I can really feel it in the training.

We had eaten seafood the night before the run and there weren't many carbs with dinner.. A very tasty meal indeed but sometimes best to order more carb-y side dishes ;)

The next day we went to the  Monterey Aquarium to see the special show "Tentacles"..it's all about octopuses (they don't call them 'octopi' or 'octopodes' it seems), cuttlefish and squids. A rare and amazing collection to see! Here's a few photos I took through the tank walls...

This week (in green) I pulled off 58 miles. That included 10x600m intervals at 5k pace on Tuesday, 3 miles of tempo running and a 16 mile run at the recommended Hanson's long run pace for my goal  (9:30m/m). I was feeling the miles (you can bet!)  but still managed to get the long run done. It was not trivial but I was able to keep the pace throughout even thought the weather was 70+ and blazing bright sun (which adds a lot to the apparent temp) . I felt pretty strong for miles 10-16 which surprised me.

I drank and sipped diluted gel every half mile..... and ended up at my proper weight after the run!...Usually on a day like that I would end up more dehydrated.

I consumed about 800 cals in 2.5 hours...that is pretty good considering the warmish temps..no nausea at all.

My conclusion is that  I should be able to handle Hanson's advanced program...I may drop some miles here and there due to constraints but it will still be many more miles than I've ever run for a buildup.

So far, only a few niggles  (when I'm not warmed up and stretched out)  but nothing that I would call an injury.

This coming week I'll be easing off .... I have 2 weeks until the 'official' T-18 weeks to Chicago and I don't want to overtrain before I even get started ;)...I've done a record amount of miles in the last 8 weeks.

Speaking of Chicago....I'm mentally prepared for the fact that it's likely to be a bust for a BQ: potentially hot weather!  I have already signed up for CIM but that's the first week of December...so, I need one more marathon in between to harvest all this training...I'm considering the Indianapolis marathon on Nov 2, the reviews for it seem pretty good although crowding there can be a problem I hear. Anybody run that one?

My plan is to see what the weather is on race day(s) and then dial it way back if too hot for a BQ and use the race as a long run. Then I'll try again at the next venue. Hopefully at least one race will have good conditions. 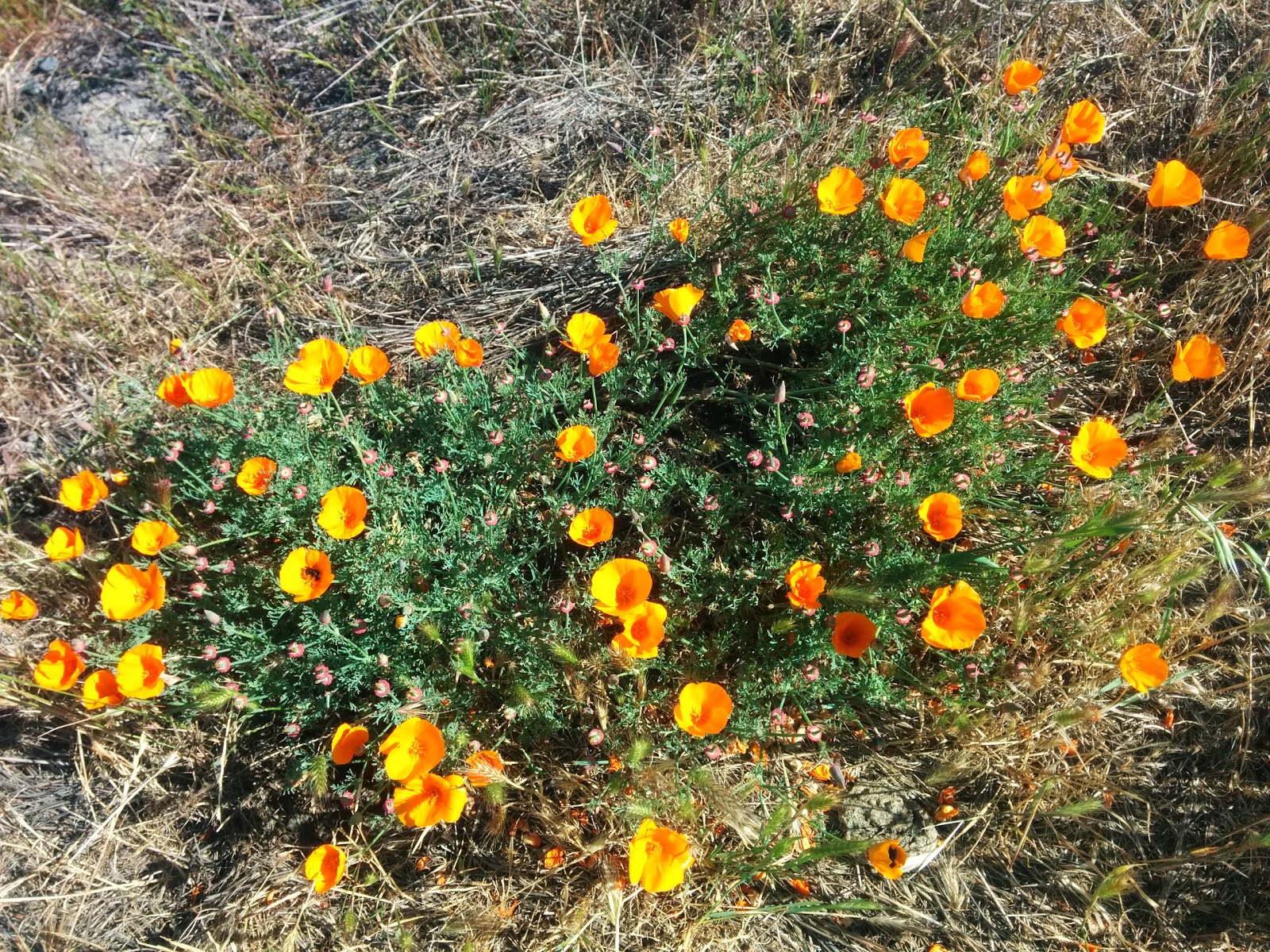 Before spending a ton of time training with the Hansons plan, I wanted to see if I could have a hope of surviving it.

I am trying the advanced plan..which peaks at 60miles per week or so (you can do more). The scary part is that there is some fast running to do (of course) along with the easy miles..

I didn't want to start the program and then have it wipe me out halfway through..that would throw a monkey wrench into my plans for Chicago: So for the last 8 weeks, I've built up my mileage by running 6 days per week (a first!) and also keeping the paces slow. Finally this last week I tossed in some speedwork to see if I could do a 60 mile week with that thrown in too...


Notice I've added a count of the number of runs done in each week...I did 7 last week: I didn't have time to do a full run in the morning so I double-trained....all slow paces so ok.

So far so good...no injuries lurking at all (knock wood). I have discovered some things I need to work on though: my lower back muscles tense up too much during all this running so I've been doing 'hang stretches' and that has helped a lot. I also found the muscles on the inside of my thighs were tightening up and so some foam rollering of the them was in order.

I did a bunch of my easy running with no GU (I don't eat breakfast either)  Sometimes I would have one gu just to get me going if I felt really ravenous. I did semi-bonk a couple of times doing this....and when I detected that I would eat my emergency GU to get me home. It is amazing how your 'tired' legs become more fresh after you feed your brain a bit ;) I think it's good to do some runs like this....but it's a balancing act with getting your body also used to eating on the run.. (more below).

I have recently realized that I don't eat enough during marathons. The old saw used to be you can take in about 200 calories / hour but recently I read this number is thought to be more like  300 cals/hour. I don't come close to either of these numbers:  200 cals/hour in a 4 hour race would be 8 GUs, I usually only take 6 or 7.

Once I started thinking about this I decided to abandon GU packs and switch to gel bottles and Hammer gel in bulk bottles. The packs are expensive and  become sticky, slippery litter if dropped. The GU packs don't even have the 'litter leash' that clif gels do and so you have this little bit of torn off top to deal with.

I theorized (read: 'hoped') by taking gel in smaller but more frequent  increments (e.g. each mile) I could eat more without getting an upset tummy. 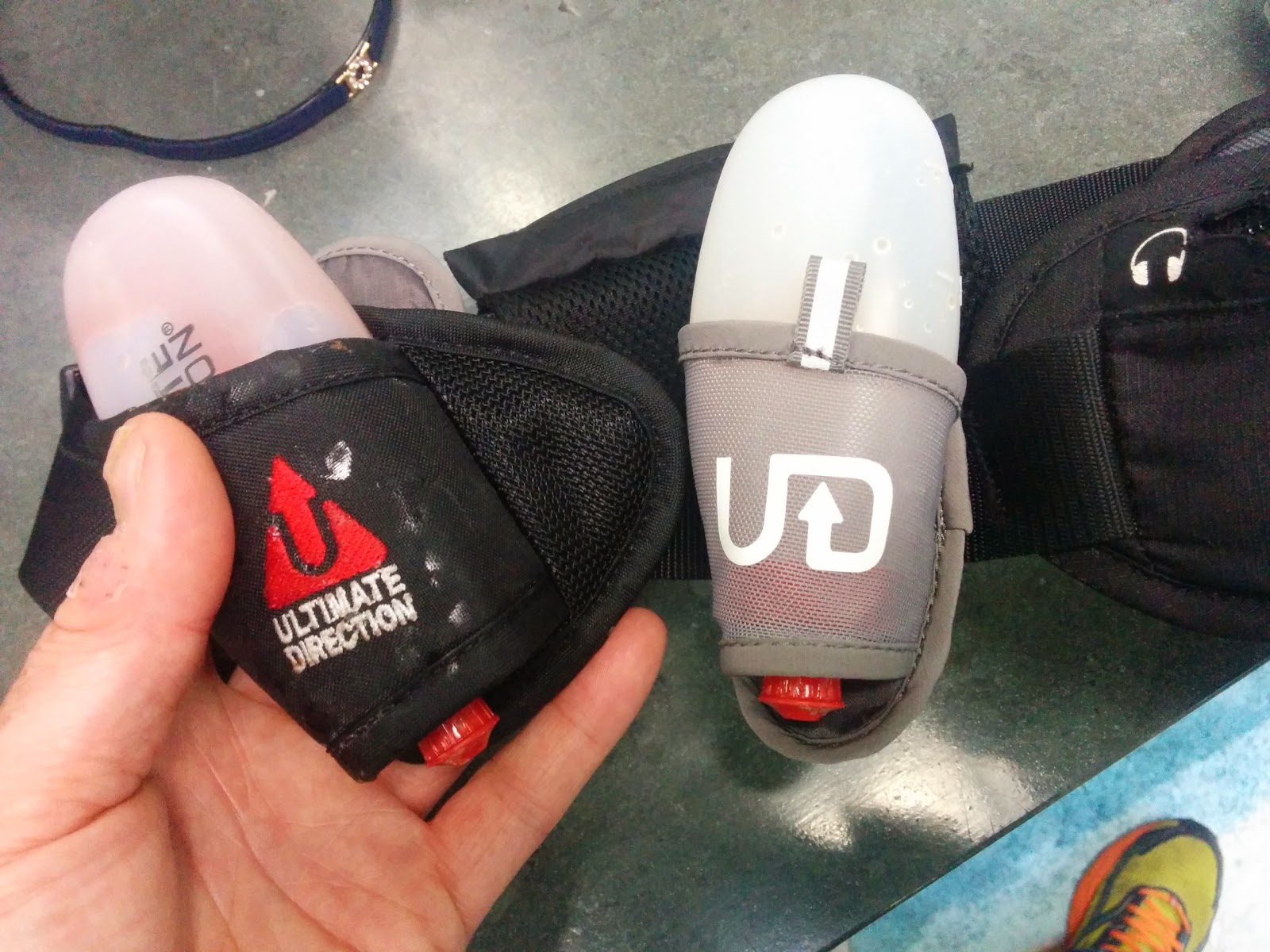 To test this I got some Ultimate Direction gel holders (I like their water bottles too) and have been trying them out. I have 3 bottles on my belt and each can hold 5+ 90 cal 'servings'

But, I only fill them about 80% and then I top them off with hot water and shake hard for a minute until the gel is diluted a bit.  This is way easier to squirt into your mouth and goes down cleanly until you can take some water. Water stops are not every mile in a race and so this is important.

I can believe that I might be able to take in more than the elite types.... they are running much faster than I do.  I will have to practice this at full marathon paces as well to see if my tummy can still take it. I might also find I can't do it reliably on any given day....time will tell.

(I've also found that if it's warm at all my ability to eat just vanishes...but that's not a problem because if it's warm you ain't running no PR anyway.)

I feel like an idiot for not trying this earlier....a few more calories during a race could make a huge difference in the last miles.