What a day. I went to bed early Sat (9pm) and had two good solid REM cycles but the last few hours before alarm at 5am were more fitful.

I was mulling over in my mind what to do and suddenly I just said to myself "You know how you cranked out that last 6 miles at Eugene? Thats HALF of the race tomorrow. You should go out at an 8:18 pace on the garmin right off the bat (which would normally result in an 8:23 or so real pace) and caution be damned. You are so much tougher than the last time you ran this race you can gut it out."

That seemed to make a lot of sense and so that was my new plan.

The weather was perfect...about 50F at the start and partly cloudy. Later we had more sun but it really wasn't that warm..never above 60F and there was a slight crosswind breeze to cool us on this East-West out-and-back course. 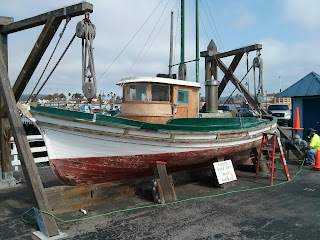 I had some breakfast (bagel , banana) and headed out for S.C at 5:30am. Got there about  6:20am, parked and picked up bib (yes they have race day pickup..yay!). Used the Port-o-let and went back to the car to snooze. The traffic became a zoo..eventually settling down and I headed to the starting line at 7:40am.

I discovered listening to the race patter there were going to be PACERS in this race and sure enough a bunch of them joined the crowd ... .one of them had a "1:50" sign. I had mixed feelings about this but decided I would not try to follow him..that turned out to not be a problem anyway as it turned out.

People were very strange in this race.....nobody wanted to go up to the start. There were 3000+ people there lined up and about 40 yards of nothing between the lead people and the start mats. The MCs had to coax people to come up there. All the pacers from 1:30 back to 1:50 were crammed together at the front. Refreshing actually!

This race was 2/3 women and 1/3 men as I think it is every year. HMs are so popular and esp so with women. Cheaper than a heath club and more fun!

The gun went off and right away we are busting a gut going up a steep rise to Cliff Drive..that hurt! Not being warmed up and having to barrel uphill is the SUCK. Anyway once at the top I settled down and cranked a few miles at sub-8:18. Why? I knew I had a big hill to get over both ways and there would be NO way to keep that pace over the hill so I wanted to bank time for that. When you are looking at a 1:30 PR (to get below 1h:50m) every second counts! I wondered if I was getting myself into hot water... 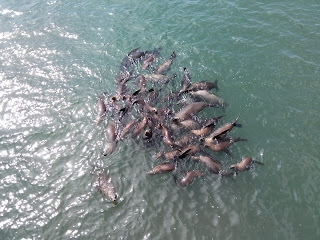 Speaking of water: I had chugged 8oz of water just before the start and hoped I could avoid any waters stops which would lose more seconds....I ended up taking two small cups of water in the race is all. I drank 16oz of water at the finish and I was ok.

The other reason I went so fast was that *%!*&# 1:50 pacer was still ahead of me even with all those fast miles I was running. WTF? Was he way ahead of me at the start? I didn't think he was that far..maybe 30 feet. This bugged me and at one point I gradually caught up to him and asked him what pace he was running. He replied "8:23" which is the pace for 1:50, duh. I said, "no really, I'm showing an 8:12 average at this point which even with GPS noise is quite a bit faster than that." he replied that "It's a long race". I replied "Yup..." when what I wanted to say was "Then why are you running so fast *now*?".

Anyway he and his group pulled ahead again at the next hill but I maintained contact back about 10-15 seconds.

Strange thing was nobody was running the tangents worth a damn on this part of the course, we had the whole road to run in but it was crowded a bit. I managed by slightly changing paces to find gaps where I could run tangents...and Cliff Dr is VERY snaky so it makes a BIG difference. Saving those precious seconds again.... 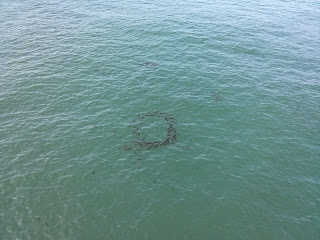 When I hit the series of hills that are about at the 1/3 point (4 miles) I used the 'punching uphill' technique I learned from Chi running and it worked really well. You do a very strong swing with hands going well forward like your are giving a HUGE uppercut up the hill. You also lift your knees a bit more...AND you relax your legs and lean forward and let the arm swing do the work. (Ok, obviously it does like 25% of the work but that's still huge).

This hills still sucked a lot out of me though and I was wondering how this was going to pan out....? I ran only an  8:33 on that hilly mile and was glad I had banked some time...my average still doing well.

Eventually we hit Wilder Ranch (which is now a park) and here was a problem. The trail was often narrow, covered in rocks, or lumpy, or grassy, or all of the above. This felt like it was burning me up and making my form impossible to maintain.

I held pace reasonably well but that darned pacer kept inching ahead until he was 20sec ahead and sometimes out of sight. I was not feeling well on some of this running  and that distance was too far and so I was mentally saying goodbye to 1:50...this was disappointing but hey, you can't argue with your body...(well you can, but you will lose ;)

Back on the pavement things and headed home I felt better, and so I started to try to really push as much as I could "the gutting out" part of the race....but we had the return through the nasty hills now to go through and one of them (which was a downhill before) actually made some people around me stop and walk.

I am proud to say I did not walk. I felt like crap and wasn't moving at pace but I was moving faster than a walk.

We passed the 10 mile marker and I was cogent enough this time to notice and I checked against my pace band and discovered, to my utter amazement that I was sub-1:50 pace. At the time I recall seeing about 20s under that pace. Do I believe the marker? I chose to! It gave me some hope but man, I just did not understand that pacer! He was way way ahead someplace.

Eventually we crested the last of the big hills and that was a great moment because I knew it was all flat now until we hit the big downhill of Cliff drive and are done! Only about 3.5 miles to go!

At this point, after recovering from the hills I was still cranking out good miles and the average on my watch was stuck on 8:16 to 8:18. I kept pushing the pace to hold and had been passing quite a lot of people but I noticed that many many young people (men and women) really got bugged when I pulled by them and would try to match my pace. Some did for a while but then dropped back.

But usually late in a race if somebody catches up to you from far back and passes you..there's no hope...(unless you were sandbagging, or were listening to a slow song or something )

RANT ON: Speaking of songs, I still don't like people that race with earbuds in a crowded race like this. YOU are RUDE. Please don't. And don't run abreast with your buddies! Not enough room for people to pass! RANT OFF.

Of course there were plenty of other people passing all of US like we were shlubs standing still, do don't go thinking I was doing *that* well.

On snake-y cliff drive now with much less crowding people STILL did not run the tangents! Insane. They had told is on the PA system before the start that the WHOLE road was for us. Silly. Anyway *I* ran the tangents.

Eventually I realized I saw the pacer and was gaining on him. That was FUN in an evil sort of way....and especially so when I passed him. He gave me a some nice words of encouragement though. I asked him how much pad he though we had and he said about 50s. Wow!

Well, now I knew I was under 1:50 unless I fell down or something and so I just focused on trying to hold pace. THe last mile I just couldn't quite keep it up and I was drooping a few seconds but I knew it didn't matter and I wanted to save something for this: 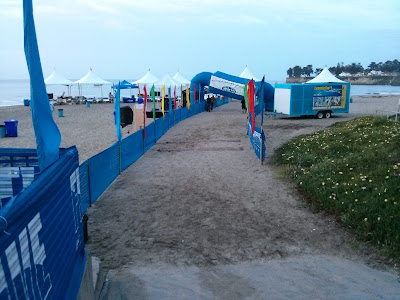 This is the dreaded "sand finish". You can see a mat in the foreground..that is NOT the finish mat. That is the mat they use to find out your name ,etc so the MC can taunt cheer you on. No, the mat is under the arch. (I walked over before the start to check all this out and take the pic).

Well, I didn't fall on my face when I hit the sand..I used a very fast cadence and 'punch up' swing and motored to the finish, punched my watch and saw:

Actual time was 1:48:28.9, extra uber wonderful goal MET. Although it was not obvious that would happen for much of the race!

Here are the splits:


You can see I did a pretty good job pacing. Here's a graph how close I held to my average pace  that compares '09 vs '13: 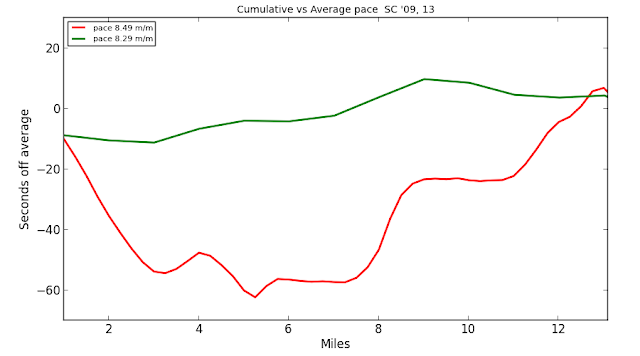 I thought I did well in '09...getting up by 60s and losing it back (red). This year I did much better (green). Don't think I can do much better than that.

Could I have gone faster? I don't think so. Given how I felt the last mile, (usually a time to kick it up) I think I was just about empty.