I am now running in Saucony Kinvaras (9 oz) and the Nike Free's for road running
and the Saucony Peregrine (10.5 oz) for trail running. These shoes are all more minimalist than the Pegasus and much lighter. My Achilles Tendinitis is well under control, even with lots of marathons.

Time to talk the most personal and important gear for any runner, the shoes!
(note: weights taken with our little postal scale)

I went back to the Pegasus after running in the Stupid Nike Vomero 4 for a year and a half and getting nasty Achilles Tendinitis.  Like a moron I figured that since the Vomero's have more padding, and cost more, they must be better for me, right? Sigh...so wrong.


I can't claim any smarts here...it was a suggestion from a guy in a running store when I complained about my A.T...he commented that the (Stupid Nike) Vomero was 'a bit stiff' and something more flexible might help with my A.T.

I remembered running in Pegasus  waaaay back in 1978-1980 and they were a good shoe then.

The Pegasus has a bit of "drop"..i.e. wedge shape from back to front. (Running barefoot is "zero drop"). However, it's less than the Stupid Nike Vomero and it was quite noticeable when I transitioned...took a few months to get used to it.


"Drop" is considered bad by the minimalize community.. a large "drop" shortens up and weakens your calf muscles (and hence the A.T. develops). I got onto a vicious cycle of needing heel lifts to reduce the stress even more, which shortened things up more, etc.


At 12oz the Pegasus is also 'reasonably light' for a non-minimalist shoe. 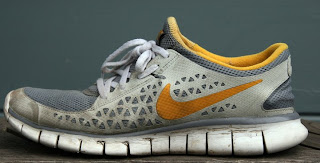 At the same time I switched back to Pegasus, I bought a pair of Nike Frees. The Free isn't really considered a minimalist shoe...it was billed as an ultra-flexible shoe to help runners build leg strength and avoid injury by running in them from time to time. The first time I ran in them boy did my legs feel it!

The lack of huge cushioning made me instinctively do a forefoot strike, using my muscles to absorb the shock that normally I would let  the shoe do....I had to or I would have been bashing my legs! 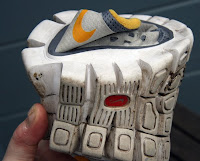 But...it was really fun....an eye-opener....a moving epiphany if you will. The Free is only 2 ounce lighter than Pegasus but feels half the weight! It's amazingly flexible..you can roll them up into a 'armadillo'-like ball.


In only a couple of months I weaned myself off of all the heel lifts and S.N.Vomero "drop". Bye bye to the A.T!


There is one flaw with the Free design: The same tiles that make the sole so flexible  also can grab and clamp onto small pea gravel when you run. It's easy to get it out, you just flex the shoe to open the crack and it falls out...but on a gravel trail you end up with quite a pile of stones down there..once your back on the road it sounds like you're wearing tap dancing shoes. So, I only wear the Frees on the roads or track.

Gradually, I started doing longer and longer distances in them...I'm up to about 10 miles max. I find my form degrades after that and I start to really beat on my legs worse than in the Pegasus.


Purists  (most of whom are probably young'uns) think you can run in such shoes for full marathons, etc, but this is completely unrealistic (so far) for me...it would be great to have the lighter shoe for a race, but my legs aren't strong enough to pull this off...yet.


The good news is that I find that the form training in this shoe transfers back to the Pegasus...my legs 'remember' the forefoot style of strike and I can 'channel' the same feel when back in the Pegasus.


I'm sure that the extra muscle strength I developed training in this way helped me get my SF marathon 9 minute PR (4:06).

So, if you haven't tried minimalist shoes, YOU REALLY SHOULD.


One more feature of the Free I like is the 'sock' style uppers...they are really flexible and have NO rigid heel counter at all. If you are coming off of A.T. problems down on the back of your heel this is really wonderful...no pressure points from the shoe on your tender tendon!


NOTE: when trying these shoes on you'll probably find that your normal size is quite tight, but the uppers will loosen up after a few runs and feel fine.

I bought these because I wanted a light flexible shoe like the Free, that I could also use to run on my favorite gravel-strewn trail around the Palo Alto airport and through the Baylands.


They do still have some drop, actually too much for my taste as it turns out..I have to really work to stay off striking the rear part of the shoe before the forefoot..perhaps not a bad thing to remind me ?

The soles are more 'normal' than the Free and don't catch rocks, etc. And boy, they are light..you feel like Mercury in them! Initially the toe box is a bit tight for me but the shoes are not really broken in yet so I'm sure that will fix itself in a few miles.


I'm being really careful breaking these shoes in (without breaking me ;) and so I've only run a few times in them, and not for very far. But I have high hopes they'll help take me to the next level of leg fitness.

These are my trail shoes...I haven't worn them for running on steep trails more then a few times (I have to drive to such runs and I really don't like having to drive to my running), but I've hiked in them a bunch of times. They are the heaviest shoe in this group by 1/2 an ounce but don't feel heavy at all when compared to hiking boots ;)

These shoes are awesome in situations with difficult traction: the large waffle knobs dig in and grip when normal shoes like the Pegasus would leave you slipping and sliding. I love that aspect of the shoe.


A downside for me is the big heel counter that curves back into toward the back of the foot....I don't like that much..some hints of a problem.. and I am a bit worried that on a long trail race (marathon) the back of my heels would get sore.


A light week: 17 miles of running..with some speedwork in there, 80 minutes of medium effort biking and 40 minutes of upper body/core workout.
I probably would have done ~ 5 more miles of running but I went bowling (!) on Friday and after two solid hours of left foot lunges (which is how my style for bowling seems to look)  I found I was pretty sore in the muscles that stabilize the knee next day, so I took it easier than I'd planned.
The bowling was fun! We did three sets...I scored 152 on my final game. I like "Zen" style sports like this. (I figure if man was meant to chase a ball around he would have been born a  kitten instead ;)
One more week to the Zombie Runner Bay Trail marathon so this will be a really light week..just a few short fast runs....the 10 day forecast does not look good...showers called out which means a wet muddy course. That will be a first!
I haven't heard from my brother-in-law...don't know how his marathon training is going, but we'll be seeing him soon and can find out if he's on board and logging the miles for LA.
Posted by Paul on Sunday, December 12, 2010