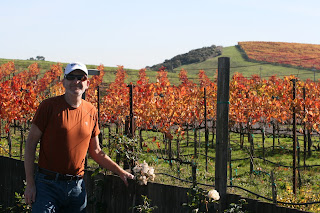 Toni then treated me to another great b'day:  seeing animals in the wilds of Sonoma visiting Safari West (not quite as good as Kenya but a lot easier to get to!), then giving me a lot of great gifts and finally having a great dinner in Yountville at "Redd". The grape vines were all showing great fall color this year, too! As an extra bonus we stopped off at the De Young Museum on the way home and saw the incredible impressionist exhibit.

Now it's time I was thinking about  some new goals for my favorite hobby 8).


When I started running in March of 2007,  my goals were to just lose weight, eat better and change my lifestyle habits....I've done that.

In some ways this was a great time...improvements were huge from month to month as the pounds came off and the fitness grew. It was easy to go faster and faster.
I've come a long way since then. A little over a full year later, I ran my first half marathon and in March of 2009 I ran my first full marathon.

This was a full two years of weight loss and then continued running before I felt I was ready..I was careful and took my time and had a great first marathon.

The racing is fun, for sure 8)


But what's next? Improvements now are smaller and  require careful peaking...and the risk of injury is higher the faster we go.


But hey, I'm in a new age group now and so the obvious question is "Do you want to run Boston?".

But it might be possible. If I lost more weight (get BMI down to 20 from 22) , trained perfectly, picked a great downhill course, I *might* be just able to do it.

In fact, the running calculators say that with my half marathon time of 1:51:26, I should be able to run a 3:50 marathon..except..the marathon is a very different bird. I've got stride degradation problems (which lead to poor running economy) slowing me down from that pace quite a bit. Perhaps I'll figure out something to prevent that...I'm working on it.

But just look what happened this year: All the people that qualified got on the internet on the day registration opened and it was full  in only *8 hours*. They all have to qualify again to try for next year.


So, frankly, Boston just doesn't excite me that much. Sure, I'd love to run it, but I don't really want to risk injuries that might keep me from running for a long stretch.

Right now I'd rather age my way into qualifying. If I can learn how to do <4:00 marathons and then keep that ability for 5 years, that time will qualiify me at age 60. (Assuming they don't mess with the qualifying times).

That's not to say I don't want to improve my marathon times as much as I can. I think I'm pretty close to figuring out how to break 4:00, given that my 4:06 was running on a pretty hilly course (SF).

So sub-4 is still a reasonable goal and maybe a bit better than that. And we have a some room to improve our shorter distances too, of course.

Trail runs/ultras have me interested. (That's way I have the skyline-to-the-sea 50k on my schedule). I like the idea of running far more than running fast I guess.

I still get a kick out of seeing the GPS saying we're 26 miles from home when we're driving back from San Francisco  and thinking to myself: "Jeeze, this is really far from home, but I could run home from here".