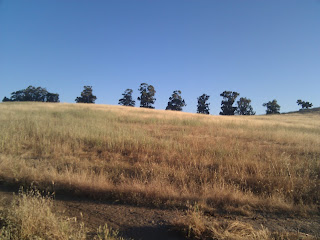 Dawn Patrol: The picture shows a ridge with a line of live oaks just after dawn in Arastradero Preserve, which I ran through for my 22+ mile run on Sunday (more on that below).

As you may recall this week (Mon-Sun) was scheduled to be:

...according to the Hal Higdon Intermediate II sched I use.

What I did was:

Monday I was sleepy and tired a bit...yawning all the time. When I awoke Tuesday it was clear that running was a bad idea..I was listening to my body and it said...Blech. Since, the 5 mile runs are the least important of all I took another rest day. (In fact there are other schedules for busy people that have only 3 days of running, but you run all 3 very hard).

Wednesday morning, luckily, I was back to old self and felt good. Really good...so I pushed the pace to 8:58. Next day took it easy and did the 5 at recovery pace (10:20 or slower)

Ok, now the weekend. The REALLY important back-to-back runs..32 miles in two days. Hal thinks that the first run gets your legs a bit tired and then by running 20 the next it somehow simulates the marathon without actually being quite as tough on you as 26.2

Anyway, that's the theory. Last year I didn't always do this..I found it very difficult to do the 20's the day after hard 10s. This year I seem to be making it happen this time.

Saturday dawned pretty warm and windy. No pollen any more, so did my around-PA-airport-in-baylands run. Not ideal conditions for running fast, but fast in this case was 9:35 which is not quite my intended marathon pace (9:20), but close enough given the conditions.. Note: my previous best marathon pace is 9:44...

Sunday I got up at 5:20am so I could run in coolness as much as possible. It was about 60-ish...any hotter than this and you slow down. You may slow down less if you practice in the heat, but you will still slow down.

Lots of people ask me "where do you run?" This run can be seen here...the start is at the green bubble where I stretch, the red bubble is home.

The first part is the Atrastradero road and back on Junipero Serra, a really big loop. This is a bit hilly (like the SFM), but a bit worse. You don't want to do this run except very early as there are small shoulders on Arastradero and people can drive fast.

Today was the "Tour de Cure" bike race and so I was seeing a lot of bikers on this loop. The longer loop of this race goes over the hills to the Pacific Ocean and back for a total distance of 120km. I don't mind the bikers but sometimes they are careless about runners. Once in a while they yell at me to run on the other side....which is strange since I was always taught that pedestrians go against the traffic and bikers go with the traffic. Whatever.

The top picture shows what it's like near dawn in these hills. At the steepest hill (around mile 5) I saw a big hawk hunting and used that as an excuse to walk up the hill and watch it for a while. I was not feeling very speedy so far, doing about 10:30 pace. After cresting the biggest hill it's pretty much all downhill and so I went faster boosting the average speed up to 10:10 or so by mile 9.

At this point a guy on the other side showed up from a side street with a very 'scuffing run' i.e. each foot rubs forward on the pavement before it comes to a stop. The sound of 'scuffers' bugs me..makes me want to ask them why they run that way....just can't be a good thing. I poured on the coal and left him behind so I would not have to listen.

Continuing I really banged back up the hills on J. Serra and kept the average coming down a little bit, then down Page mill taking it down even more.

Waiting at the light at Page Mill and El Camino it was mile 15 or so and I was feeling a bit beat up..the usual general light soreness in the legs but not too bad at all. I had been drinking a reasonable amount (had topped off my bottles once at a drinking fountain). I was taking GU gel or GU chomps every half hour. Not bad, I was thinking to myself.

Next on the map you can see that I headed for the track at the Cubberly School, it's a dirt track and 1/3 of it has trees making shade which is nice. I got there at about mile 17. The track is about 1 mile from home, so I figured I needed to do 4 miles on the track and then head home to hit 22.

We were getting to the really interesting part of the run now. From my point of view the entire point of the run was to get to these last 5 miles. This is where the tough part in the marathon starts, and if unprepared, where it becomes bad enough to that that "Wall" nickname.

I have found that during long runs you don't want to get too close to home too soon. Your little "inner voice" (a term coined by Bruce Fordyce) will be whispering in your ear saying things like "hey, you're at 20 now and that's all the schedule says you need..why not take that next left and head home?". It's very important to pick a route that doesn't require heavy thinking about which turns to take to fill out the distance...leaving the track before 21 was a clear cheat and so Mr Voice had to shut up.... I really wanted to do 22 miles.


So why do I want to even run 26.2 miles? It's just so darn far. Why do people dive 200 feet with scuba? Probably stems from a drive to see what it's like and do something not many other people do. Sure, the diving is easier in shallow water (short runs and races) but at some point you might want to see what it's like in really deep water (i.e. the marathon). In both you have to be well trained and ready for anything that might come up or Bad Things Happen (much worse in diving I think!).

Orbiting the track, continuing my gradual speed-up, I was cranking out sub 9:00 miles to show myself that I was still not hitting any wall, even though I was 200 feet down. Some soccer people showed up and started warming up...Hey, good that they were out for exercise and not just watching the world cup on TV!

But, I noticed that almost every one of these 20-30 yr olds was overweight...some downright tubby. It was at this time that the scuba analogy came into my head. I had been thinking about why do I do this..and so I started to think of the soccer people as large groupers swimming around inside my path.

A few soccer balls crossed my path as they practiced, and I hit one back...but only half way. "Sorry, that's all I got" I shrugged as I continued banging out my fast quarters. By this time I was at about 19 miles and the average pace was down to 9:48 or so. I could feel that I was pushing to do this pace...but I was able to hold it.

I focused on my stride...it probably looked the same to a bystander but I could tell I was gradually getting a little more variation in my foot placements and follow-through..."micro wiggles" if you will. Focusing your mind on a relaxed, smooth, low-energy stride is running skill , it's really no different than practicing the violin or any other manual activity. If you practice it when tired your brain learns how to hold it together better during tough times.

Finally, 21 miles! Said goodbye in my head to the groupers and headed for home down Middlefield Rd. Turned up Loma Verde and by the time I got home it was 22.5 miles...the average pace by now was 9:43, almost exactly my PR pace. I felt I could have gone another 3.6 miles..maybe not holding <9:00 miles but <9:20 for sure.

So, a good run...pushed into deep water and didn't get the bends 8). Was well hydrated at the end (weight not down) even though bright sun and the temps 70 for the last hour (and the pace moderately high for such a long run). I think the eating is working and maybe helping me feel as good as I am a the end of these longy runs.

Next week an easy week: