Kicking off 2022 with another marathon! After running CIM 2021 I have a pretty good base of training..it's a shame to waste that, right?

As a Marathon Maniac I have done a 'double'  (2 marathons in 2 days) but I'm talking about taking some recovery time, re-peaking with a bit of training and then doing another.

I looked for upcoming marathons and discovered the Mesa Marathon.....Toni and I had been in Phoenix earlier around the new year and had some fun and it's a very quick nonstop flight from San Jose. I decided on a 24hr visit...fly down day before run the race and fly back.

Take a look at the elevation profile:

Looks good, right? A lot of net downhill except for the huge uphill bump at miles 4.5 to 6.5. But the scale is quite coarse here...200' per line...some of those little tiny bumps are bigger once you get there....and there's a lot of them, turns out there's about 300' of up which is not that bad but not zero.
I know that downhill races are hard on the quads but I figured I could toughen them up in the 11 weeks I had before race day.

The course is point to point, which means a bus ride in the wee hours to the start...the other issue with this race is HEAT.  It's Arizona  after all...that was a bit of a worry.

But hey, it's a filler marathon, I'm not going to be re-peaked very well (I do have to recover from CIM properly). I didn't worry about it.

But my training went well, perhaps too well:  I tweaked a muscle on the top of my left foot. I tried to take it easy and train at really slow paces, but no go....eventually after 2-3 miles it would force me to a walk!

I just laid off running completely for a while, just some easy walks and doing a lot of icing and spa. 3 day before the race and did a ~2.5 mile run and it seems ok. My biggest fear was that it would let go mid race and I would not even be able to walk it in, I'd have to wait for the sag-wagon or some other race vehicle to get me back to the finish. I moved my return flight to 4:30pm-ish to make sure I had plenty of time.

I would have to be extra careful with hydration, not something I normally have to 'sweat' over...<haha>.

During CIM 2021 I wore my water bottle belt and it came in handy even though I got water at every single stop. Nice to be able to get more whenever I need it. Normally,  I wear a belt with GU pouches but I have a really nice belt for training with little Lowenpro camera pocket on the belt for my phone. (Quick access for pics!). I decided to use that again.

Mesa was not a GU race (some other stuff...not trying that out in a race!)  And instead of the sticky little foil packets I would be using these: 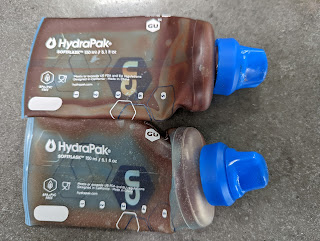 These hydropacks (I found them on Amazon) are made by GU and hold 5 packets worth of GU. They are soft, easy to squeeze and the rotating knob on top is easy to close with your teeth.

I found during CIM the ease of use made me eat more and my body seemed to really like it...more on that later.....

To fill them, you don't have to open up zillions of packets, you can buy a bulk bag of GU  (see below). I got one of chocolate and the other of berry. 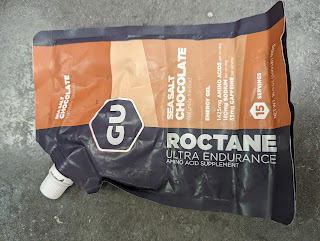 I'm not sure one should leave GU for a long time in the hydropak.. but for a short time it seems fine. I only use them for races and long runs...I just fuss with the foil packs otherwise.

Speaking of gels, when we were AirBnBing in Seattle for a month I ran out of gels and had to buy some and could only find "Hammer" gels. I made do with them but they are TERRIBLE. Do Not Buy.  Not tart like GU and the flavors are poorly done. Blech. I'll stick with GU thankyouverymuch. (And it sticks with me ;)

Easy flight down and Lyfted to the Marriot Courtyard hotel Wrigleyville. Plenty of other marathoners arriving there too ;)

(Did NOT have to go to a Expo at all:  I loved the option to get my bib and other race stuff sent to me for a slight additional charge.)

Picked the hotel because it was only a 10 minute walk from where we catch busses to the start. Loading was starting at 4am (YAWN)! Got some food at around 5pm and then just stayed off my feet  in the hotel room, eventually slept a few hours.

Was up and double checked that I had everything and out the door @ 3:45am and walked in the dark (but lots of streetlights) to the start.  And .....of course.... it was hopping. One of the helpers directing traffic pointed me to where I should wait for pickup and I walked over to join about 10 runners standing there. In the booklet for the race it had mentioned the busses would be lined up for boarding..and we could see them in the distance..and also everybody heading over.

We realized the helper was wrong and went with the crowds toward the busses.

We left pretty quickly ..driving for a while and started climbing uphill...after 30 minutes we parked in a long line of busses that was facing the start way way ahead. After the buses there was a line of porta potties with a line of propane heaters (a la Covid al-fresco dining style) I tried waiting outside. 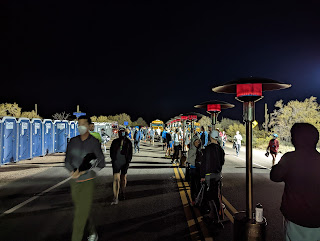 It was just too windy and cold.
I had an old long sleeve cotton shirt as a throwaway and also the mylar rescue blanket that was part of the race kit but not good enough. The start was at 6:30 and we had an hour and a half to go (!).

....back onto a bus:
I picked one that was not too crowded (easy to do) and it was warm enough to do the job...just barely.
Some chatting with people nearby to pass the time.

Eventually back out and walking toward the start. 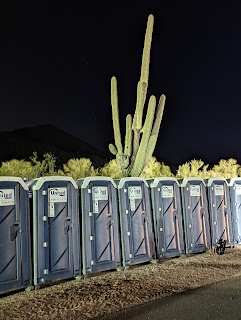 Did you ever see porta potties with a Saguaro cactus looming over them? Still pitch dark out in the desert.

Eventually it was time to head up to the start ...I didn't even bother to go a pace group. I was playing it by ear and staying out back. The Star Spangled Banner and some fireworks to signal the start!

Started my watch on the mat and off we went. It was dark..some had headlamps but there was the slightest twilight dawn making it not pitch dark and once we got on the course there were some artificial lights set up.

I just had to stop for a few seconds to take this photo: 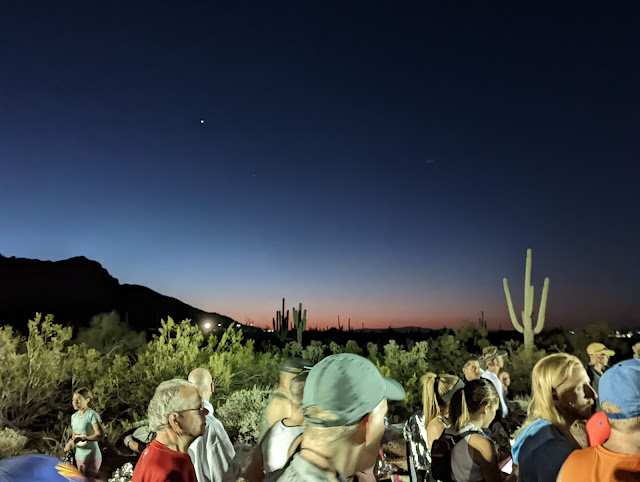 See that bright star? It's the "Morning Star" , i.e. the planet Venus when it's elongation from the sun causes it to be visible in the early morning just a little while before the sun rises.

The super clear dry sky, low humidity and minimal sunlight creeping over the horizon made it super bright.

The roads here (and the rest of the course) are quite good.  No winter 'frost heaves' nor huge cracks, humps or other dangers. The roads are crazy wide. I settled into my 10:15-ish pacing and just tried to loosen up. (I realized I had not done my usual stretching and flexibility stuff at the start. oops)

I had my hearing aids set up as usual to give me pace and HR from my garmin once a minute (so I don't have to look at the watch ) and I was running a pretty low HR for my 10:15 pace, about 118. Talking with people on the bus that had run this race before they made it clear that the downs will burn out your quads if you hit then too fast so I was trying to just relax and not push it.

The desert was beautiful......gradually as we bombed downhill there were more (fancy) houses but they were integrated with the desert. 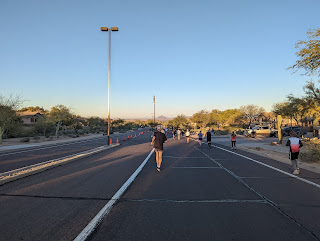 Sun is still not very high, and so not on our bodies. Pretty quickly the road became quite wide with basically 4 lanes of space. This was true all the way...in some cases we had TWO lanes just for runners.

Here is the course: 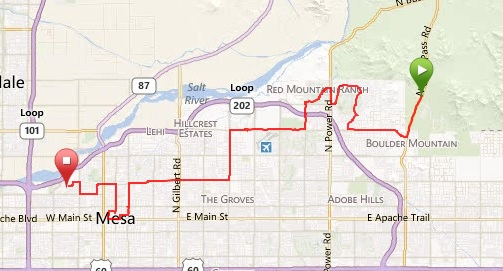 We're on the part that heads due south from the start and that's why the sun in that photo is from the East/(our left) and why Venus was over there ;)

Soon we take a sharp right and it's still downhill..we a view out of the city (sorry no photos).

The water stops are every 2 miles and I take one glass at the first and second stops but not long after that I start taking 2 full glasses at each stop.  I can already tell my quads are getting a workout after 3-4 miles. They are holding up but getting beat on.

Eventually turn right (heading north) and this is the climb visible on the elevation profile. Of course it still early and it's a nice change from the down so no problem. I'm keeping the paces in around 10:15 and on the big hill was at 11+ for one split.

At mile 6 it's another 'bombing down' section....we start hammering the quads again. I feel it adding up over time.  The sun is now on our bodies and it is strong. It probably adds the 10F to the equivalent heat load.  The good news is that it is bone-freaking-dry air and so sweating works really well.

But you need hydration for that...

In the early miles I was getting annoyed by the tiny amount of water in the cups handed to me at the water stops (1/3 full).  This luckily got better after the first hour,  but I was getting noticeably thirsty: I started taking TWO glasses at every single water stop...I did this for the rest of the race (and I used up the water in my  bottle too).

I had averaged ~10:20 m/m which in retrospect was too fast. Thinking I could pull off another 4:30 race in such heat was a bit silly. My quads were indeed toasted but I really don't think that was a problem..they kept working ok..no spasms or cramps.

It was just the heat and sun. At this point of the race there were a lot more spectators. The half marathoners had left before we got there but spectators had hung around cheering us on...with the usual signs (a corny tradition for races, especially marathons).

2 small cups of full of water every 21 minutes (2 miles) in that weather was not going to cut it. But..I could tell I was still sweating so that was good. My shirt was mostly bone dry from the evaporation. (Often in a race  or long run it gets yucky dripping wet, but not here..)

Which, after talking with other people, seems to have been common. This is not unexpected for a race that has few turns and is out in the open (no tall buildings/trees, or heavy clouds around)

I enjoyed that free cider...and even so it was quite a few hours before I was properly re-hydrated.