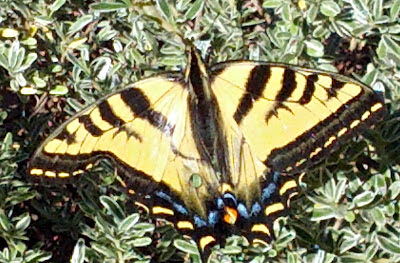 No, not in my stomach..in my front yard. There was a pair just hanging out in the bright setting sun.


I thought they might be newly hatched but instead I realized they were older ..there is a nice hole in the lower left of this guys wing...not good. The other one had part of a wing missing too.


It's a tough life for a butterfly.


Not so great for me either...Tuesday I went out and just didn't have it..I was still tired from the hot, hilly Sunday run I guess. I was going to do 5 but took a short-cut home. One of the shortest runs I've done in ages.

Wednesday morning I felt stronger..so for this run I tried to kick it up after mile 3 to 130 bpm. I've been running long enough that I think I can do a "maf" pace that's 5bpm higher.


There were times during this run were I just wanted to stop and walk. ?  I waited and the feeling passed.  After the minor hill at mile 8 my efficiency went to pot. It's clear I'm not used to faster paces any more.  Overall though a good run. Cadence could have been a bit faster though.


Thursday I forgot my HR monitor  as I was running from work and forgot to pack it. I was all set to do some hill sprints but was just too beat from Wednesday...eventually I realized that I was just really low on fuel. I ate a roctane and felt ever so much better in a few minutes.  I did do lower body weights and myrtle routine after.


Finally, if you live in Silicon Valley you are not surprised to see stuff like this: 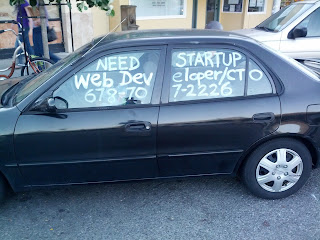