Well. You know the results.  About 30 minutes saved on this year's San Lorenzo River Marathon vs 2011. How did I do this? It's fun to crunch the numbers after the races are done and you are sitting in your easy chair 8)

So, let's find out as I don't know: I ran without looking at the clock and just tried to keep the effort low the first half. I also tried to keep the cadence high when walking and I tried to really power walk with long strides.


How did this actually work out? Here's my average cadence during both races: 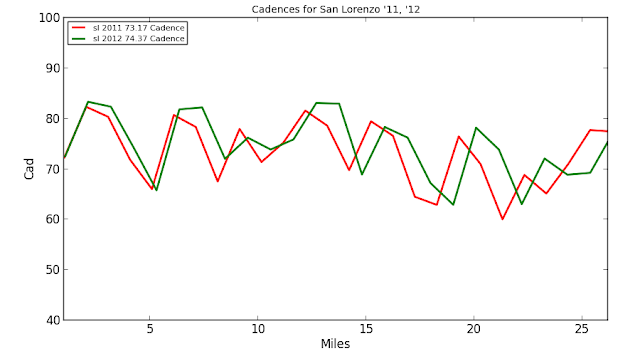 It's a little confusing because the traces don't quite line up. This is because I actually went off course for about 1/2 a mile in the 2012 race (yes forgot to mention that in my blog report)...so that shifted the graph over a bit.

But never mind that. You can see that the cadences are basically the same between years. So much for me thinking that I was doing better at that! Now let's look at the actual paces (smoothed over several miles to show trending better): 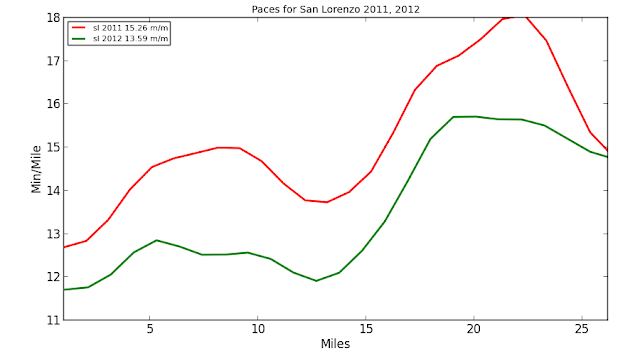 Pretty clear..I went faster at all points during the race. I held my pace much better from 18 to 26 as well. In 2011 I had a huge slow down here..I did speed back up on the final downhill but barely got back to the pace I did for the last 6 miles this year. Kudos to me! So the power walking helped a ton and my ability to keep running on the flats in the last hour helped too.  A longer stride walking up those nasty hills (enabled by a few more leg muscles) probably saved the most time.

Now lets look at the cumulative pace. Just to explain what this is: for each race we start and end at 0..the actual pace that was run. What is plotted is the time in seconds that I am "up" or "down" on the average pace for that run. I.e. we are looking at how evenly we paced the race. This is a great way of ignoring the achieved average pace between two runs and instead looking at how well we held to that pace during the whole run.

You can see that basically I went out too fast and banked a ton of time (1000 seconds!) and then we got thrown from the train at mile 17 or so and lost all that banked time. Both races are very very close on this graph... my mission of evening out the splits was a total FAIL. Pretty funny! Ok, so not very even, but even so I ran a bit faster than last year...was my HR higher to do this? Answer, no. Here is my efficiency in yards-per-beat. You can see that I was more efficient the entire race. This is probably because of that bit more muscle. 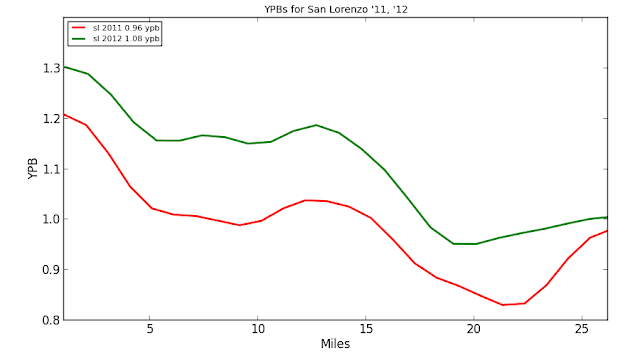 My goal of more even pacing was a total FAIL. Pushing the cadence was also a total fail. What saved me 30 minutes was just being a bit faster the entire race...with huge slowdowns in both races after mile 17 or so. The speed improvement came from a longer stride..and I can tell you that was the power walking I was able to do...I don't think my running stride was any different.

The improvement in pace did not require a faster heart rate..that stayed about the same for both races at 125 bpm average. Instead I was moving faster at the same heart rate.

I'll bet I could have run 5-10 minutes faster with even pacing. I'm not complaining mind you..I'm very happy with my performance! But it is interesting to me that without checking my watch I was not able to do either of the things I set out to do. I just ran the exact same race again..but a touch faster throughout.

So if I the start hadn't been blocked up, if I didn't take the wrong turn for 1/2 mile, hadn't stopped to talk and then if ran 10 minutes faster with even pacing maybe I could have done 10-20 minutes faster ..i.e. under 6 hours. Something to shoot for next year!

But hey, it's a trail marathon. I was there to say hello to the redwoods..not obsess about minutes . So no angst here! 8)

The ability to judge proper pace for one's conditioning is NOT EASY. I have learned to do this in road races fairly well (knock wood) but even though I ran this course last year I was not able to do a very good job at all at balancing my effort. This will not happen again if I can help it!

Ideally I would like to learn out to pace any trail marathon just looking at the elevation chart and knowing my current fitness. Perhaps someday....