I also ran two beautiful and fun trail marathons and my more intense training showed there too.. ran much faster times for these very hilly races.

And of course I ran Berlin (one of the majors) and had a great time pacing Lynne and seeing all the crowds and Berlin in general. It's a great city (and one of the cheapest capital cities to stay in in Europe, btw).

The only problem of the year was a calf strain that bugged me just before the Ragnar I was supposed to run. I ended up pulling out of that...waiting patiently a few weeks for healing, and then doing as much running as I dared to be ready for Berlin.

After a month off work and traveling around with zero running, I started up again and re-pulled my calf in the same place. Clearly something was wrong.  As of year-end I'm doing much better and I think I know what was happening...a full post will come to later on that subject! It's a good lesson to remember.

Here's my running for the last year in my favorite format. The graph shows a lot at once: .miles per run  by the Y axis length,  age of the run on the X axis, color mix shows the HR distribution during the run. 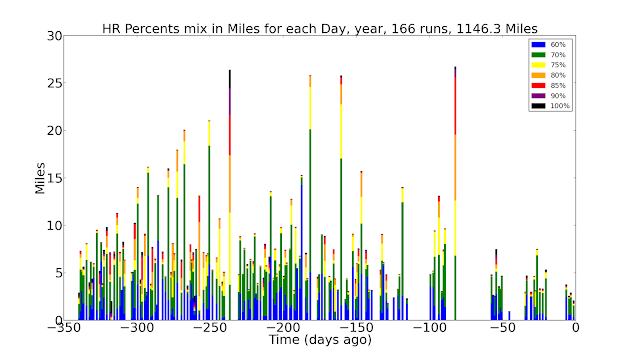 You can see my 4 marathons sticking up (Eugene, 2 trail races and Berlin) and you can see the gaps due to my calf pulls and my 3 weeks of time off after Berlin. I actually ran Berlin on very little training...compare the ramp up of distance you can see to the left of the first spike (Eugene at about age=-240 days) with the mish-mash of runs before Berlin at age about -90 days. Just goes to show you if you slow down a little bit you can go and go.. Its the all-out running that is HARD for me.

This next graph shows my pace vs HR for each split that wasn't run on a huge up or downhill.  My 9 min/mile HR is about 130 bpm and it takes about 10 bpm to speed up by 1 min/mile. These numbers are about as good as I've ever seen. 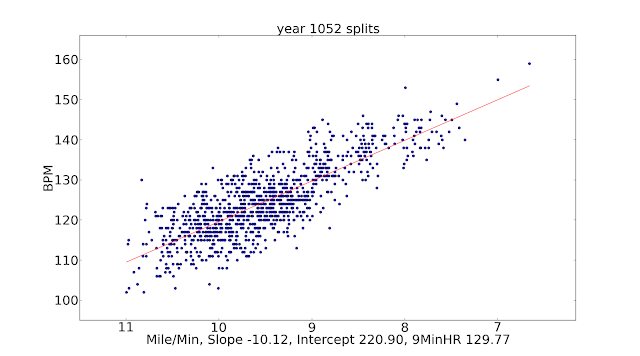 Another view of my years miles, this time with some smoothing. The average distance per run is about 7 miles but I ran less than 3.5 days/ week when averaged over the year. 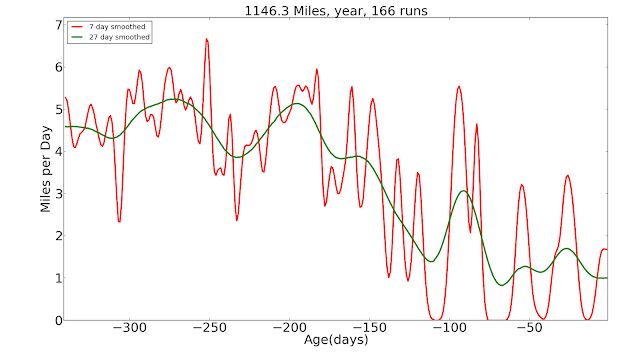 Goals for 2013:
* implement calf strain solutions and have smooth build-up to Tacoma in May.
* Run a hard race in Tacoma and leave it all on the course (assuming good weather).
* Enjoy the 10 year MM reunion.
* Run Chicago (perhaps peaked).
* Run GG trail marathon again, and pick another new trail marathon to do.
* Get around to running some shorter races!

I started running in about March of 2007. After losing 50 lbs over one year (running very VERY slowly) I bought a Garmin 405 and I ran the San Francisco half marathon in July 2008.  That fall I did my first marathon training buildup and ran Napa on 3/1/2009.

That's about 4 years of serious running with 15 marathons and one 50k.  Let's take a look at the raw stats for each year: 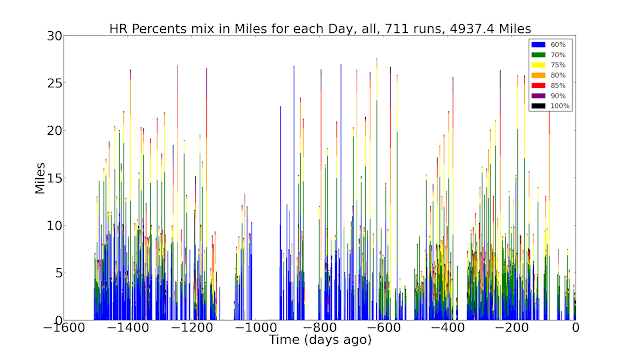 The graph above is for all 4 years of running. You can see there is less blue and more other colors (higher HRs) for the last year vs the previous.