My father-in-law knows I'm a marathon geek and send me this link to a paper by a J.B Elliot. The title is "Marathon pacing and elevation change".


In the paper he refers to something called Meyers pacing model for the marathon. Apparently an engineer, George Meyers and Hal Higdon developed a model for the typical pacing seen in elite runners and also non-elite runners.


The Meyers model breaks the marathon down into 4 sections as shown below. 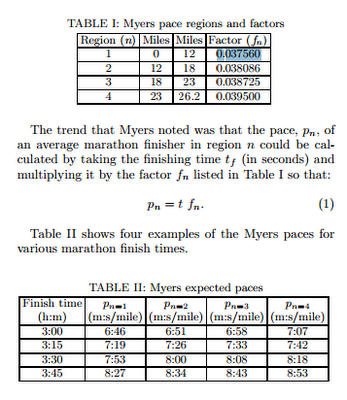 I wrote a routine that lets me enter my marathon time and creates a 'fake' set of run data with the same finishing time and Meyers paces for each distance range.

This is what the unsmoothed data would look like for a 3:54:54 marathon: 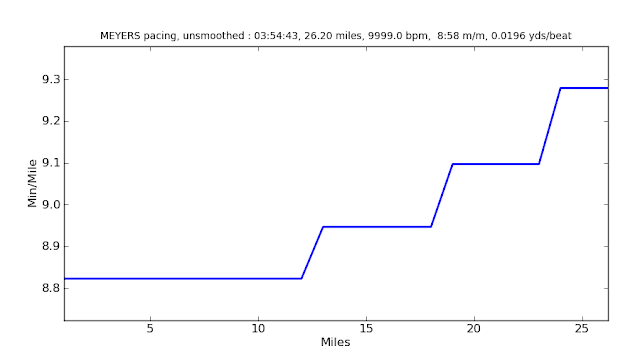 Of course, we don't really slow down in jumps like that so I do some smoothing to get the same net time but more evenly. Here I have plotted the smoothed Meyers pacing vs my Eugene performance: 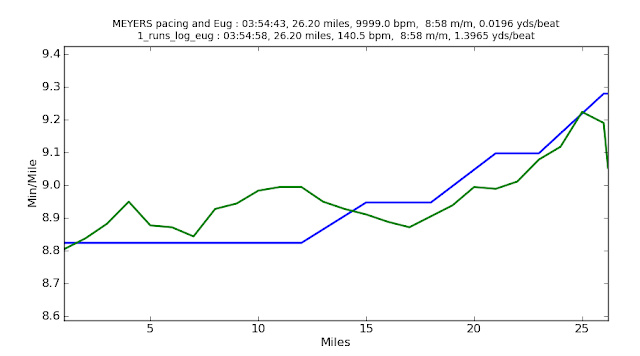 I find that a darn good match to what I actually ran for the last miles. The two bumps in miles 1-12 are due to the hill at mile 4-5 and mile 11.

(Coming up: Mr J.B. Elliots paper is actually about hill corrections to the Meyers pacing model..I plan to implement those next and see what that looks like. 8)

I think that for an optimal marathon you probably have to slow down a bit in the last miles, i.e. have slightly positive splits to run your theoretical fastest.

My conjecture is: it's better to go a teeny bit faster when your running economy is good (e.g muscles are springier ) the day is cool, etc and then accept that you will slow down. (even though you fight it as much as possible).

Right now I don't think we understand the system well enough to figure this out for sure. But I know my 'springs' (legs) aren't very springy past mile 20!

I know it feels a lot better to run even or negative splits. But I think we are leaving performance on the table when that happens. I'm talking about very modest positive splits ..less than 1%.

On the other hand, these model was created from people out there doing their thing, and their thing might just be sub-optimal.

What do you think?

Assuming a flat course, what kind of splits would you try for? For your best marathon times what did you do?