Here I plot the current cumulative 'banking' of seconds over the actual average pace I ended up running for the marathon. You can roughly think of the curves that arc upward as showing races that targeted a slower pace than achieved with a kick at the end.

Races that arc downward show a pace that starts faster than the achieved and with a fade at the end. 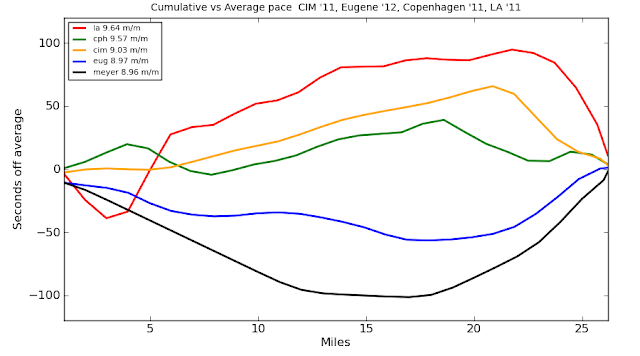 At the half I was about 40 secs fast..so the second half was 80 seconds slower than the first half.  This is pretty good....80 seconds out of about 117 minutes in the half would be less than a 1% fade.

If you remember this post I found the typical male at Eugene fades about 4% in my speed range, so I did ok.

The black line shows the Meyer's typical pace and you can see that this shows a 100s or so pad and then fade.


The red line slows LA marathon which has the big hill by Disney hall in the early miles ...and then we ran a pace that was slower than our eventual average...so we get a linear adding of seconds each mile...then we hit the big downhills at the end and pull the time right down.

CIM (orange) also shows this..a linear increase (I was holding a 3:58 pace) then a kick that brings the time down to the average (3:56 finish)

CPH (green) was more even some bumps due to hills but pretty darn even. 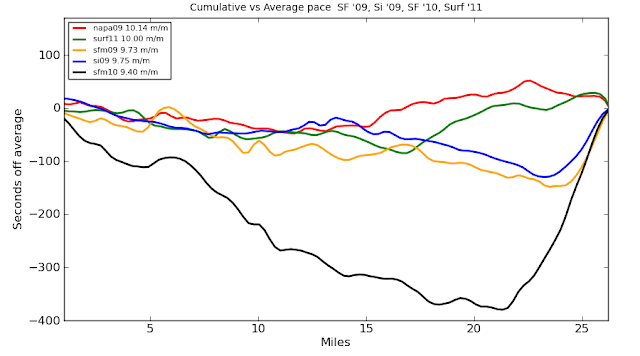 Here are the older slower marathons. Again more wiggles due to .25 mile splits. The black line (SFM '10), my old PR 4:06 shows me holding a steady pace  that was quite fast compared to my average adn then at mile 21.5 we lost the 4:00 pace group and slid 6 minutes. Ouch. I remember that 6 miles and it was not fun 8/