As you may recall Jill is coaching me toward some faster races later this year.


So far, I'm learning how incredible unfit I am in a few hundred little muscles. I have done zero speedwork in ages and never done any drills. No cross training for a couple of months either. Basically I slacked off and just got my marathons done.


There's this thing called "Specificity of Training" and I've been training to run 9:30m/m pace or slower..period. So guess what? ...I was able to do that and that only.


Anything else is a very intense workout.


I start with some running at base and some fast strides on Tuesday where I got to feel the wind in my hair (never happens at 9:30m/m unless it's windy ;) and some drills after (weird!..hard!).


The slope was not that steep: maybe 7% or so? After a few miles of running we do:

Here's a graph of the HR data and my cadence...heart has no trouble cranking the output and then recovering: 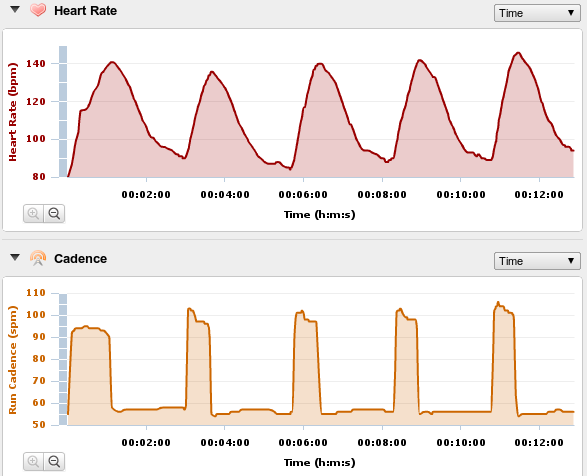 My muscles were feeling the previous days drills a bit...but it was just so much fun to blast up the hills....Jill had me running these at a 8:00 pace but I ran them at 7:00 or less after the first one 8/

..then a 1.2 mile cool-down...but my right leg was now getting pretty tweaky...I've learned you don't want to let it get to the full on cramp stage..big penalty for that....and so I walked the last .2 miles to the gym.
Once there, I tried to do the full strength training workout as written. The clamshells were ok...even with a rubber tension band. However the jumping squats were a FAIL..legs said "no can do".  Walking lunges ok, goblet squats ok..hmm legs pretty shot, but glute bridges NO and V-ups NO. OMG. Spent.


Next day was a cross training day...45 min. I was sore as hell and did light spinning on bike for 15 min, 15 of elliptical and 15 of easy rowing. Legs were sore in zillions of new, different places.


Then DOMS..uuuggh. The rest of the week I had to dial back and try to recover. The soreness peaked on Friday. My right leg had not just the tweaky calf but now a sore hamstring muscle. (I never have had a any complaints from my hamstrings before). No running is the prescription  for the weekend.


So, major fail to listen to body on my part. WHY DO WE DO THESE THINGS?


The combination of the sheer fun of running fast, wanting to do everything on the schedule and the delayed feedback of soreness messed up the training for the weekend.  Stoopid runner!...BAD dog!..no soup for YOU!


This week you can bet I'll be more careful.


I will admit I was bummed at my stupidity + crappy ability...but on the other hand I am intrigued that I could run marathons reasonably well even though my overall strength was so poor. The obvious hope is that getting more balanced musculature will give me an extra edge in running 26.2.


It makes sense....I have always felt that muscle power was what was limiting me in marathons... I have read that  need enough extra to be keep your pace even as groups of fibers drop out of the mix to rest...if you don't have enough fibers, your brain is going to force you to slow down by reducing the firing rate (slowing you down).


I have experienced this inexorable slowdown in pace. There isn't much you can do about it when it hits.


If there are any hills, it's even worse. As I said I've always hated hills (ups that is) and it's probably because I just don't have enough muscle to do the job at those faster paces.


Intense training and weights should be good for building lean body mass too....I have lost a little bit of weight according to the scale (2 lbs) but more importantly the %bodyfat went below 23% for the first time ever ..22.7% (FYI recall that the dunk test showed the scale's 23.4% was really 18.6%). So perhaps I have been building more muscle? The scale isn't very accurate so it will take a few weeks to see a believable trend.