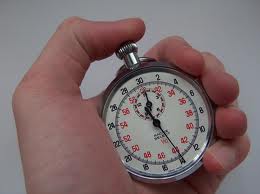 The Boston marathon is a big deal for marathoners...not just because it's the oldest but because the qualifying times they instituted to keep down entries inadvertently created the Worlds Biggest Goal to shoot for.

So everybody now has this cool goal...and a bunch of them make it....more and more in fact. As a result, they have been forced yet again to raise the standards. At this point I think I worked out that you need to be in the top 10% of your age group to qualify for Boston.

I'm not complaining about that mind you..Boston is very crowded already so they needed to do something. And it's great having a race like that.


BUT...To be in the top 10%, you need everything: time to train, proper training technique, no injuries, lots of GUTS and good genes to tie it all together.

I kind of get annoyed sometimes when I see Boston-bound bloggers all revved up..they get all motivational.. "Shoot for your dreams! ....You could be doing this too! ...No Limits!",  Uh huh.

I understand what they are trying to do (motivate people), and that's a good thing ...but it's a bit tricky. Unless you have the genes, you ain't gonna qualify for Boston.

There is a huge spectrum in running ability.."There's always somebody faster or slower than you" is a truism....for all but two people ;).

Each person stares at this spectrum and tries to see where they fit in. Those of us that are on the downward slope of the age curve love age grading because we can compare ourselves to the young-un's out there (including our former selves too).

Eventually you realize if Boston is even a remote possibility..and if not, all the rah rah seems a bit misguided.


When asked, as I always will be by a new acquaintance, "Are you running Boston?" I say, no, I'm not fast enough and I have a lot of work to do to even attempt to qualify. (e.g. lose 15 lbs, train like a maniac and not get injured, etc)


This why I absolutely love the idea of the Marathon Maniacs. There is a set of rules on how awards are given and there is no importance on finishing time, only the number of marathons you do in a given time and/or in different places.


What a stroke of genius! Now we have goals that get as tough as you want (e.g. all 50 states in a year..4 marathons in 4 days are right up there at the top), but anybody can aspire to do almost any of the goals even without the super speedy 10% genes you need to BQ. The bronze level (the most common by far) requires two marathons in 16 days, or three in 90 days. Not trivial but totally doable. (Remember no speed required, power walking is just fine.).

Having done 6 out of the 8 marathons in one year I need to get silver level, I can say that it's a different kind of challenge than going fast. It takes just as much care and finesse and knowledge of your body and it's current limitations as trying to PR. You don't have time to recover from injuries or illness with 6 weeks between races (on average), so you need to figure out how to train and stay healthy. Now *thats* a sustainable challenge!

(I'll talk much more about the details of what this was like  when I finish my "streak" (as the MM'ers call it) on June 12 at the San Lorenzo trail marathon and get my MM silver, hopefully not counting my chickens yet)


Even more amazing is that the guys that started MM are pretty darn fast themselves..even when they run lots of marathons they are still fast!. They could have made a more complex formula taking finishing times into account etc.


We even have the Half Maniacs club now for whom full marathons are too much of a time commitment! Or you can qualify for both 8)


But this running thing is getting more and more popular. We need more interesting challenges!

I enjoyed the "California Dreamin Series" although I found it a bit annoying that the award (a very nice jacket) was the same whether you did all half marathons or all fulls...it's good to have various step levels like the MM-ers have i think.


So bloggy-sphere friends.here's my "Challenge Challenge"...brainstorm and post any ideas you have! They can be things you do on your own (like the 100 pushups challege stuff) or group things, family things, things that require a big organization, anything goes!  Are all the good ideas already out there? Hard to believe!


From the sublime to the profane..

This is the second week after S2S and I feel pretty recovered. I was really dragged out on Tuesday's run but by Wednesday I was feeling really great...roaring back if you will.


A few people have been asking me if the multiple races are breaking me down or building me up. I worried about this too and I have to say that it looked like the  former in the beginning, but now it's definitely the latter. Remember I don't run these races all-out! (....wouldn't survive to the next one 8)


In fact I've had kind of a running epiphany....I think I've learn now how to stay injury free and I think I know how to train a lot more effectively on lower miles (and potentially kick some PR ass when I get back to doing higher miles and targeting a race for a PR). I will talk more about this in a couple of months.


I have some travel coming up to a friends wedding but I hope to run while there..can you guess where it is from the photo?

Remember to think of good challenge ideas! Have a great weekend!