Rundown: Race for Literacy Half Marathon 2018


The Race for Literacy, is a small, local race that starts and ends in the Sunnyvale Baylands park. It runs on the San Tomas Aquino bike path as well as the Bay  (a part I run on from work all the time!). It's a charity race that helps bring reading to the poorest areas of India.

There were about 700 people running the 5k / 10k: only 64 people ran the half marathon which makes it very small and personal. 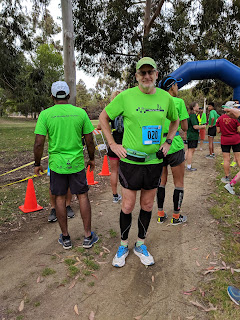 Nice green tech shirts given...I like them. The start was very informal and off we went at 8am. The 10k and 5k races were staggered later, and did not create any problems for us. Nice!

The weather was good: cloudy and 60F with some wind. I decided on a 9:30 m/m pace as I had run a 10 miler a few weeks ago and thought I could probably hold that pace.

After we all got sorted out by pace (the usual crazy people running ahead then walking, etc.) I settled in to my 9:30 pace....I thought about pushing harder but decided that was a bad idea...instead I would wait until the halfway point (6.5 miles) and see how I felt.

We turned onto the San Tomas Aquino bike path at about mile 2 and passed the Levi stadium with the turn around shortly after.

At mile 5 we turned back on the bay trail and they shortly onto dirt to get on the water's edge bay trail (this is where I run from work many times per week). After this point, I was not passed but I did pass 3-4 other runners during this time. 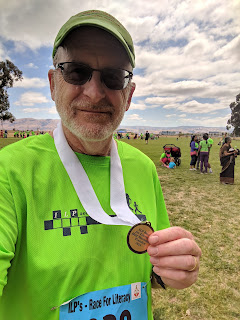 Not bad! Next step is up the mileage and start marathon training for the Napa Valley Marathon as my first post THR full. That race was my first marathon so I decided it was time to do it again.
Posted by Paul on Sunday, June 17, 2018