Well, it's finally the weekend for my first double marathon. The buildup to these races has been the exact opposite of my Tacoma buildup: nothing! I did get in one more 20 miler two weeks after tacoma, which is 4 weeks ago but only about 40 miles for the month. 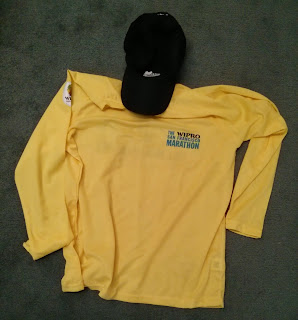 I'm not worried since I plan to follow the advice of Walt Stack: "Start slow...and taper off". 8)

I was toying with the idea of a 5 hour -ish pace..and then I realized it has been 6 years and 1 month since I ran my very first race (The Bay to Breakers) as newly born runner.

At that time I still weighed a lot and so I ran it at a very conservative but still difficult for me 12:23 min/mile pace. I had just started my journey to better health and was still 40-50 lbs heavier than now (see the FAQ for an old photo)

So in honor of that version of me back then I thought I should run that pace for the SFM. 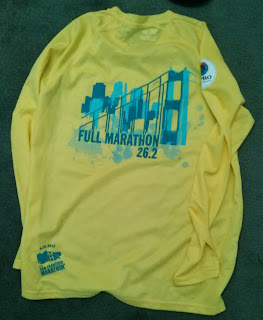 Weirdly it will take a lot of guts to walk to that last wave. But on the other hand I'm thinking about the next marathon.....

If the double goes well, next year I may do the WTH (Worth the Hurt) 52.4 mile Ultra. This is a really interesting wrinkle to the SFM: starting at midnight the night before, you run the course BACKWARDS. They have 5 aid stations open in the night but you have to bring a hydration pack of your own as well as a headlamp.

You must finish this loop by 5am (5 hours). Then, you get in any wave start you want (except 1 and 2) and run the SFM FORWARDS. You have to run this loop in less than 6 hours.

What can you say about an expo that hasn't been said? I got there early and it was not a the zoo it was probably going to become later, which was nice. 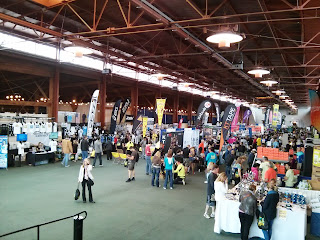 I checked out the huge wall map of the SFM to see if there were any course changes this year (no) and met a really nice couple visiting from Germany: they were from Berlin! It was fun talking about world marathons and also brainstorming other USA marathons they might run.

The shirt this year is nice: yellow long sleeve. The color came out more realistic on the second photo (shot of the back) ...I like the design on the back.

I collect hats and especially marathon hats and so I got a black SFM hat. Don't have lot of black race hats.

I'm looking forward to the post race food at the SFM: it's always good. (and for $150 it damn well better be). In particular the free beer is a Sierra Nevada which is decent (unlike the Michelob light crap most races have)

Driving back home, I suddenly remembered it was father's day this weekend.  I was nearly  overcome by a wave of grief that hit me like hammer. Does one ever get over the loss of a parent? After 21 years It would seem that the answer is still no.

I thought about all things we shared together: flying, science and engineering, home projects, etc. I know he would have been amazed and proud of my healthy self and my running exploits..he'd be following me along during the race via text messages I'm sure.

Our family had some tough times but somehow he kept it together and I am who I am because of him. I'll be thinking of him tomorrow.

Off to bed now. The SFM starts early so they can open up the GG bridge before the locals get totally peeved....