SFM was strangely early this year (usually it's in July) and I found out from reading the local news that it's because of the America's Cup happening then. No matter, both months are pretty similar for weather. I also read that the attendance was down from 25,000 to about 20,000 due to the date change.

SFM also starts early, waves going from 5:30 to 6:22am. I drove up to the 5th and Mission garage at 5am and then snoozed in my car until it was time to walk over to the Embarcadero. 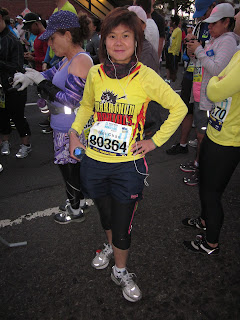 I got to the wave 8 corral about 30 minutes ahead of the start. Right away I saw a Maniac and said hello. Her name was Mei Chan, was from the U.K. and turned out she was doing a TRIPLE: Crissy field marathon, SFM and then Tracy's Fat Ass Marathon! It was nice to talk about various places we'd run and compare notes as we waited for the start.

We both noticed that none of the pacers for the wave 8 people were visible. Oh well. The temps were cool but the skies were pretty clear of fog, which means it might be a bit warmer during the finish up the back stretch.

I did have to use the bathroom to pee, but it was hopeless to get through the huge lines and so I just hoped I'd find one before too long on the course. I also knew of a stand of trees after the bridge and in the wooded section that I had seen used by guys in 2010..but that was way out at mile 11. Oh well..

Eventually we got walked up to the start and were let go! Off! Originally I was going to run at 10:30 pace or so and then sprinkle in walks to drop my pace back into the 11's. However, I got caught up with running the same way as everybody else and so I ended up not doing that

until much later in the race.

I ran near Mei until we hit the first water stop at around 2 miles in Fort Mason and then we got separated as I was doing H2O only...probably just as well as she need to go slowly to do her third tomorrow and I might drag her along faster than she should go. I checked out the lines at the eco-cans and they were huge.

I did walk *all* uphills of any steepness. I feel this is really key if you want to finish a marathon with fresh legs and you are running slower paces. (ok, 'freshER' legs) . Many people in this wave were not doing this..they would grind up the hills then they would pad slowly down the hill whereas I would power walk up....lose some ground ..but then open up my stride and do my normal thing and catch right back up to them.

Of course I say all this but we'll see if I know what I'm talking about tomorrow! 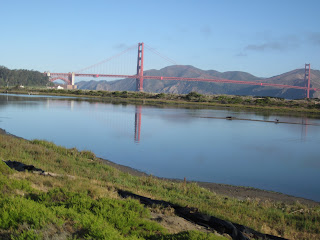 The weather was clear over the bay and the bridge was beautiful. Of my 3 SFMs this was the best  for that.   As we went by a spot with a particularly nice view around Crissy field a guy pulled up to me after I took a shot and said "right here is where I proposed to my wife". A nice thought.

Climbing (walking) up the road to the bridge level I noticed there were no more of the signs with SF trivia on them as in years past. Boo! I liked them. They would have a question on one telephone pole (up high so would not get vandalized the night before) and then the answer would come 1/2 mile later on another pole.  They had probably 20 of them. Oh well.

Once I got up on the bridge I noticed they had dispensed with the cones and ropes to separate the out-and-back lanes of runners. This was a really good idea! It allowed the 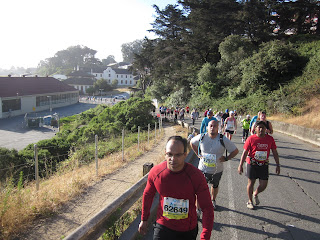 runners to trade off the width in a way that worked out a lot better and had no tripping hazards. At wave 8 time, the outbound stream is pretty thin and so the coming back stream had more room.

As usual I noticed the bridge deck Cal Trans workers (in there huge orange full body rubber suits) had put nice rubber mats on the expansion joints. Still some other hazards but didn't see anybody trip on them. I got some really nice shots on the bridge. The workers were enjoying the race and high five-ing the runners.

At the turn around I heard the music of a California Guitar Trio piece (are old enough to remember the piece "Classical Gas?, that was the CGT). I stopped to take a picture of the group and give them a thumbs up..they were pretty darn good and they looked the part as 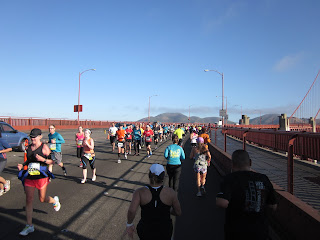 Finally some eco-cans that were not a huge line. Even better was that one of the cans was , erm, not usable if you wanted to sit down..i.e. men only. It was the most disgusting potty visit I have ever had in my LIFE. And I've been all over the world using squat toilets, etc.  It must be pretty tough if you are a lady, your legs are sore and you have to hover. I could not do that.

Anyway, on my way quickly and back over the bridge the other way. Once we got into the wooded area of the Presidio it was cloudy over that part, which was actually very nice at 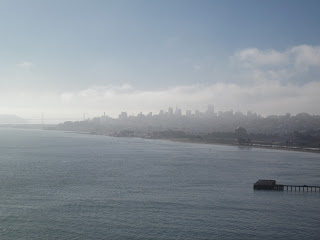 Up and down rollers here. I had a nice chat with a guy running in full anti-sun gear (thin hazmat like suit, big hat and bandana around face) I think his name was Jeff. He was not a Maniac but from his history it sounded like he should be one.

Eventually we hit GG park and split off the first half marathoners......one of the nice things starting in wave 8 is that it was never as crowded as it gets up in waves 4 and 5. I will remember that next time I run for a time at SF..I may ALWAYS start in the back!

We headed west toward the ocean, passing the Bison paddock (they are always at the far 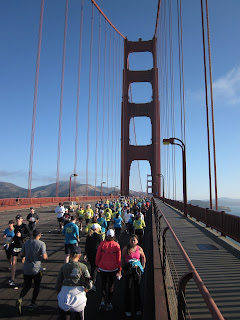 left back corner when I run through here 8/)

Running through the half in about 2:33 I was definitely feeling the race more than I had hoped I would. Not running much since May 5th and eating a ton of food on my trip didn't help I guess 8/

I noticed my HRs also showed I was in pretty miserable condition compared to my Tacoma buildup. How quickly the sharpening goes away! But for the double it's all about the legs....cardio shmardio!

Soon we turned back east to climb back through the park up to the Haight and I realized that because we were so back-of-the-pack that 2nd halfer waves at pretty much all started! So only a few of them around too. No screaming hordes of fresh faces making is realize how tired we were compared to them. Nice! 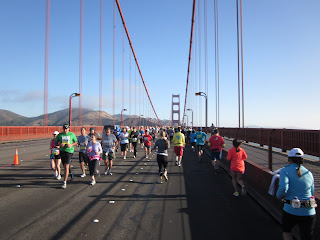 Up we went ...the full length of the park now (plus some dithers around Stow lake etc) and here we do some climbing: from sea level up to the Haight is about 250 feet. I think a lot of people get fried on this part because the hills are not that steep but they go and go. In 2010 I was one of them....gradually losing the 4:00 pace group and finishing in 4:06.

We passed the finish chutes for the first halfers..(mostly all done by now) and some nice support folks were giving out sweet rolls over the fencing to the full marathoners. 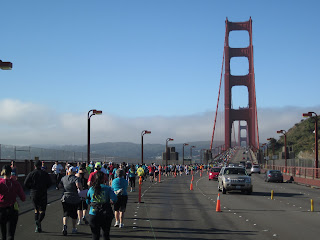 It's a long way out of the park but finally we emerged onto city streets. I noticed a person with a "PACER" orange shirt was ahead and he seemed to be exactly on my pace, which was just slower than 5 hours still. Eventually I caught him and asked him and he said he was the 5:10 pacer.

His name was Jon Tucker and I pretty much ended up running the rest of the race with him, which has never happened before. His pace happened to be exactly what I could do that day...and also walking all the hills and through the aid stations. We matched up pretty well.

He was a Maniac too as it turned out (SEVEN stars for doing 13 marathons in 13 weeks!)
and had done many races as a pacer. 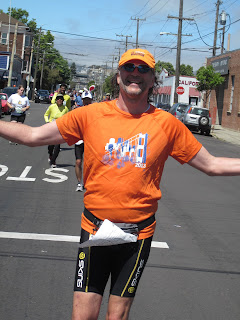 We wound our way through Southeast SF and eventually turned North...the miles racking up as we chatted and saw the sights of the city. The fog overhead was long gone once we got out of the park so it was a bit warm on your skin but the air was nice a cold so it kind of canceled out.

I had been eating a GU every 5 miles since the start and during this part from miles 20 to the end I was dumping some water on my head as well as well as drinking. Generally SFM is extremely well run but I do object to the teeny cups they have for drinks...luckily you could just ask for two (or more). No problem.

The volunteers were plentiful and working like mad the entire race. The spectators are never plentiful in SFM and this year they were really down I seemed to me, or perhaps being at the back-of-pack they had just left after the person they were cheering had moved on.

Many volunteers during the race would wish people (like me that were older) a happy father's day. I didn't mind because it reminded me to think about my Dad. 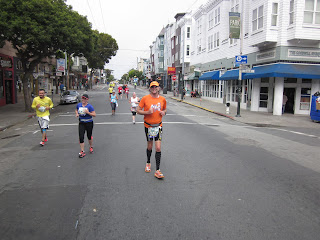 This part of the race was now dead flat but I was pretty tired and so *just* able to hold my pace without straining. Eventually we came around the ball park and could see that there was only a mile to go.

Of course then you get some energy but I did not sprint or anything..just picked up the pace a bit the last 1/4 mile. At the finish I didn't even look at my watch or the clock but knew it was around 5:10 as Jon had been tracking us to precision.

The food was ok, but no smoothies DARNIT. DId have the fresh baked scones though and some chocolate milk. The beer looked like a good idea but then I found out you had to wait in a humongous line to get a wrist band (proof of age) and THEN you could get your beer. 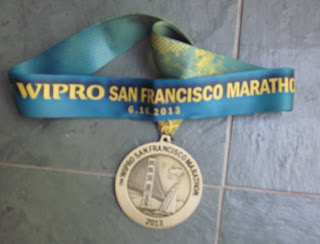 Sigh. Wishing I was at the Copenhagen marathon finish with beer stands around with no lines and no crazy worrying about checking ID.

I was pretty stiff walking back to my car (about .8 mile) and when I got OUT of the car, even stiffer, but after a shower and some extensive foam rollering I felt a lot better. I went to "The counter" for a burger etc and a couple of pints of good beer and wow did that go down easy.

No idea how it will go tomorrow but I kept on my back with my legs up a lot of the time so hopefully. Right now I think my hopes of negative splitting are impossible. I will be slower than today for sure and I'm not sure going even slower (5:30? 6:00?) would change that much.

I predict I will do about 6 hours-ish.

Once out of the park (always a good moment in the SFM as then you are free of huge hills ) I kept right on 11:50 pace to the finish (about 9 more miles)