Ms Zippy  has a post about running or racing: which do you prefer? I'm a runner...if you follow my blog you know that I like racing but I actually don't do it that often compared to a 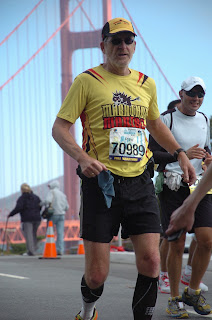 And that's why they are mostly marathons..since I'm not doing that many, might as well make them more challenging.

After the a new PR at the SC Half followed by Tacoma, which (was a complete blowup in the heat and hills) I needed a new goal, but something different than speed. Running a double was the perfect way of using all those Tacoma training miles but not beating myself up.

The double was a very interesting experience and I'm glad I did it. The day after I wondered if I could have done a triple, and I think the answer is, yes, but there would be a slowdown. Probably 5:30 or even slower...hard to know.

Running a 5:09 and then a 5:10 you may think I knew what I was doing. Not really..WELL perhaps my unconscious mind helped me out there and I listened to it? Both races I just went out and ran at a pace that seemed  "really easy". The second day I was surprised that pace ended up the same. (Of course the course was much less hilly the second day..if I had been asked to run the SFM course twice I would have added another 15 minutes both days) 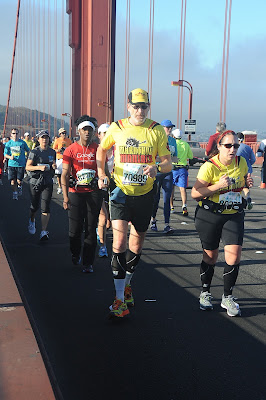 Today is 5 days after the double and finally I went out and did 5 miles..slowly...I could have run at 3 days after but instead I took some 1-2 mile walks at midday to loosen up.

So now what? Back to MAF paces and mileage buildup, drop some of the pounds gained in all the traveling and eating. Back to strength training after having turned to mush and ....
drum roll....BACK TO SWIMMING!

You may remember my attempts at this a year or so ago...I was using the Endless pools and they were ok but I really felt like I needed some instruction..couldn't find any place that was convenient for me. 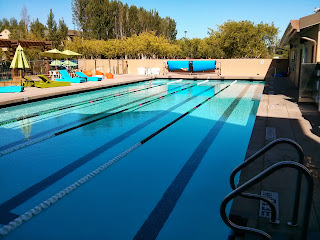 Well lo and behold now I have a pool that is close by...AND the teacher that was previously highly recommended is teaching there! Perfect! It's a very nice 4 lane pool.

I had my first lesson Wednesday. My legs were still a bit tired but it was fine.This is a full 25m length pool, don't have to do many turns....64 lengths to the mile.

Swimming requires  good technique more than any other triathlon event. More like dancing, or actually as I prefer to think of it: Swimming is really flying (in water)
I have a pilots license and flew models and  hang gliders quite a bit (years ago in my 20's) and there is an element of balance with body and aircraft position sensing.

If you fall out of position with bad technique you can literally 'stall out' like an airplane: your legs drop,  speed drops and you degrade into messed up thrashing about.

I watched a bunch of people practicing before my lesson and lets just say that there were some people that were beautiful to watch and some that where shockingly F'ed up.

With runners you see some bad form yes, foot 'scuffers' being my biggest peeve. But OMG with swimming it's insane. Imagine runners that fling themselves down on the pavement, get back up, and then do it again and again. Yes, it really seems that bad.
I read books and your blogs and after taking several years  figured out how to run properly and how to keep my various body systems in order for running and not injured (knock wood).

For swimming I decided some live instruction would be useful for laying down the correct muscle memories from the get-go.

My lesson went well. I was swimming too fast and having to rest after each length..and my previous swimming muscle memory is long gone (just as well), but there was a lot of thinking and explaining going on so the rests were fine.

I think the biggest revelation for me is the so called 'front quadrant'  technique combined with the return draw with the elbow UP. Long ago when I was a kid, the crawl was done with the arms windmilling around, each arm 180 degrees from the other. Bzzt! Wrong!

Instead, imagine head down, both arms stretched out in front of you and then taking a stroke with one arm and returning it back out front, then stroking with the other arm and back out. That is exaggerating perhaps,  but contrasts it nicely with the windmilling method ;)

Having the arms out more of the time lengthens your waterline length (which means you glide faster)  and it also counterbalances the weight of your hips and keeps your legs flat to the water.

A lot to master all at the same time! (And more to come I'm sure). The trainer has lots of drills to break down the elements and get the right stuff going.... next lesson on Tuesday.

I'm on jury duty call this week, ugh. Hopefully I don't get picked.