Another great week! So far things are just going better than I could have imagined. I continue to be amazed at how much fast running I can do and not break.

This was a higher mileage week for CIM but 3 miles of it was a walk that I took with Toni on the garmin. That brings down the average pace for CIM quite a bit so ignore that. 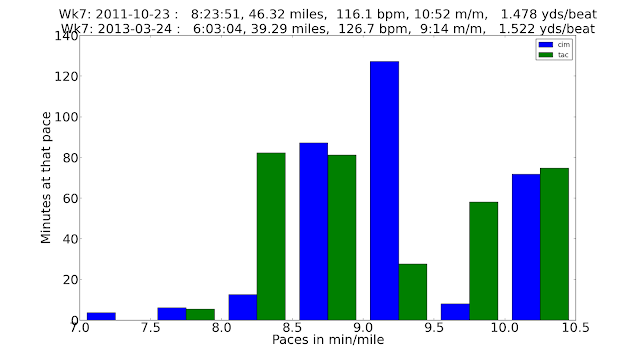 Ok, now compare with Eugene week 7. A few less miles for Eugene (some AT issues I think ). This week was mostly slower than 9m/m for Eugene..... as always now I'm more efficient too: 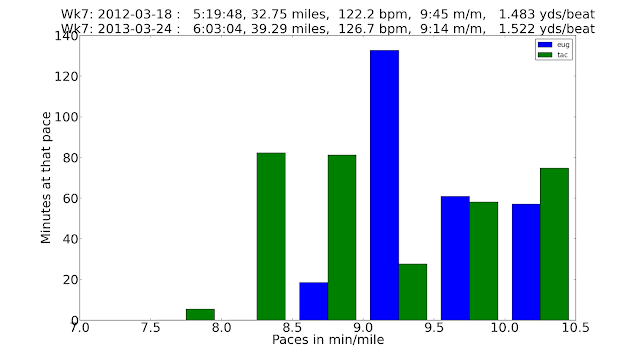 I feel pretty darn good now. The key is going to be to not peak too early and not break anything. I still have my two 20+ miler runs coming up and need to make sure I don't do them too fast.

Monday I noticed I had a pretty big trigger point on my lelf calf , but on the inside top..a new place. I hadn't really noticed it during my 18 mile run but it was pretty big. I worked on it with the jackknobber a bit during the day and took a walk to loosen it up.
---------

Tuesday I was tired, probably combo of not great sleep and the effects of the 18 miler and hard week previous so I decided to bag my plan of some hill sprints and just do a short recovery jog. The calf felt pretty loosened up...did not notice the trigger point during the run. But I was dragging even for 3-ish miles at a 10:30 pace!
-----------

Wednesday I felt a bit recovered but not 100%. I went to the big hill 2 mile from my house and did one lousy 800m up the hill ..ugh...I practically just gave up and dropped to a jog a couple of times.

When I saw the 8:30 pace, it seemed way slow and said to myself "see, you are too tired and need to take it easy again today". So I jogged on straight ahead and figured I do another easy run.

After about a minute, I realized that I felt much better and that maybe I was just needing to warm up as per usual so turned around. I did 3 more intervals that were pretty strong but TOUGH to do and then called it a day.  But Mr "I.V." was foiled again!

Thursday I set out to do some HM pace running. I was wearing a new pair of Kinvara 3's...man they are light, and being new the cushioning is decent.

I felt great on this run and felt like I could have finished a full 13.1 miles..it would not have been easy, but I think I could have done it.  This looks good for the Santa Cruz half in 2.5 weeks. I was imagining the final push to the finish at Tacoma ..such visualization techniques really help me later in the real race.

Again the fast running is good efficiency compared all my previous  PR marathon buildup runs at week 7. They tended to be around 1.48 or so and now I'm doing 1.54-ish. That is a big improvement at this stage of the buildup.

Friday was a rest day. Legs felt amazingly well considering Thursday's run. Walking up stairs they were not at 100% but I was not dragging and felt strong. Went for a half mile walk mid-day to loosen up.

Saturday the plan was slow base with some small hills:


I was not sore from Thursdays run but I could tell I was not fully recharged yet.

Sunday I felt really refreshed and ready to go. The plan was 13 miles in my Kinvaras again, at MP, with two hard miles at the the end. And thats what I did...notice that I have snuck my MP up to 8:45..dare I do this on race day? I was going out on a limb (I thought) targeting 8:50..but now...I'm not so sure.

The Kinvaras once again felt awesomely light. For the whole run I felt fast and light... in the zone! It helped that it was cool-ish and beautiful sunshine. (Alas, in another couple of weeks the mustard will be blooming and the baylands will be dicey for me to run in for a while.)

For miles 11-12 I kicked it up and felt strong. A great run. Very little cardiac drift. My LT has been pushed up nicely in the last few weeks with all the 140+ bpm running I'll bet.