Sunday I ran the Long Beach Marathon. For those just tuning in, let's recap a bit:
Due to travel and catching a cold on the return, the running has been spare since August. Last long run was 8 weeks previous, and total mileage about 70 miles.
Adding injury to insult we tore our left calf muscle about 3 weeks ago and have been feeling that slowly get better.
So, my expectations were low, my goals were:
We'll see how I did with these goals later. 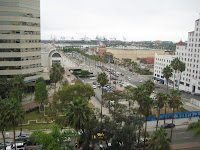 This was my first time flying to a race...took JetBlue from SFO down to LGB the day before and checked into my hotel, which was very close to the expo and the start and finish lines.
Got to the Expo, snarfed my packet of stuff and made a quick pass around the floor.
I'm I the only person that thinks running Expos are dumb? How much stuff can you market to a runner, especially when it's all the same stuff? Meh.

Long Beach did something nice though, they had mile marker posters made by local artists (children and adults) and they had them mounted on stands. Here's mile marker #1:
This were really nicely done and were easy to spot during the race as well as making for an added interesting element to the course. There was a silent auction of all the mile markers to benefit a local charity...another nice idea.
I walked over to the California Pizza Kitchen to get some dinner and sat at the bar....looking around you could spot all the runners: not eating pizzas or pastas  smothered in cheese, but just the simple sauces. ...I did the same 8). I had a nice chat with a guy doing the half marathon that used to do the inline-skating marathons as part of this race (they discontinued them because it was too dangerous and not many people did that event)
Before bed,  I got all my kit set up. I've got checklists now to make sure I don't forget to take anything on the trip and also make sure I don't forget anything on race morning (you can find them in my "Useful stuff" section on the right).
So far the weather was looking perfect: overcast and about 60F for the whole morning. I debated whether I should wear my cut-down shirt, or a regular shirt (brought both)..decided to wait for race morning to decide that. Went to sleep at about 8:30pm and had no problem falling asleep...got up at 3pm to eat some light breakfast (I brought my favorite cereal and a plastic bowl and spoon from home, and had bought a small milk at a market earlier. 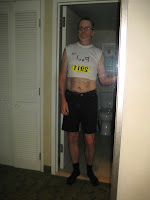 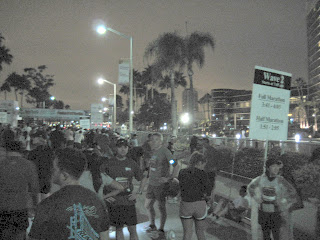 After that, I wasn't able to sleep and finally I got up at about 5:15...got all my stuff on and snapped a bad photo 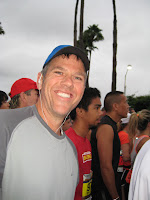 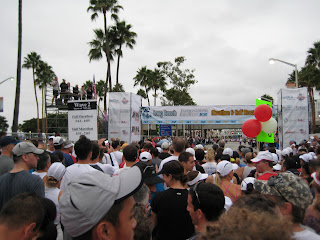 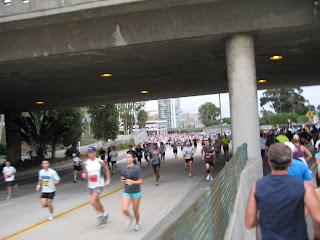 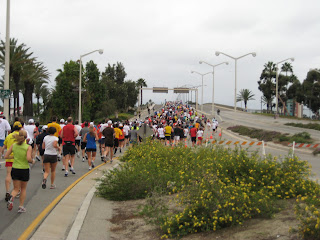 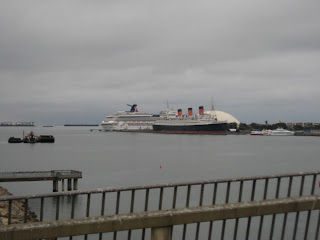 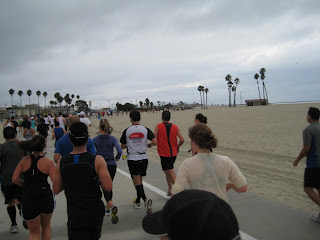 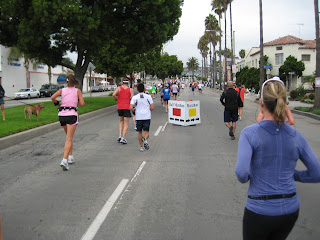 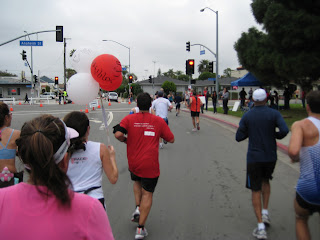 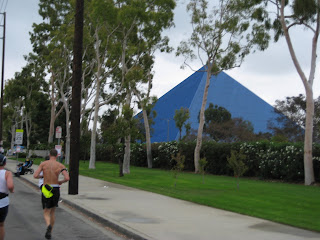 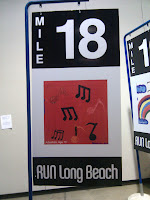 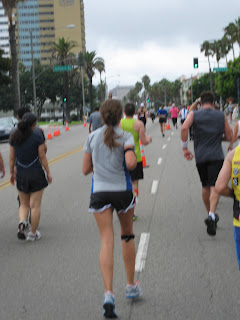 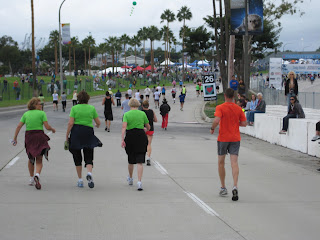 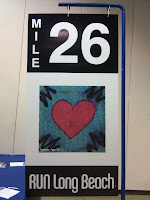 I did good on this one I think, the garmin shows my cadence as well over 85 for the first 18 miles of the race. I had ZERO Achilles issues before, during or after the race. That problem is solved.  I get an A on this one.
Hmmmm. I give myself a D on this one. I probably should have just gone out at a 10 minute pace and I would have had no cramping. But hey.
I gave myself a B- here. I drank a ton..maybe even too much I was starting to think. I did have breakfast and eat 3 GUS so I did ok but I did feel a bit bloaty after mile 17 or so.  At one point during the walk-run part I picked up a bag of watermelon slices being given away and MAN that that taste good! I wonder if these GUS are really better than just using salt tabs and real foods? Something to explore...
Get an A here! It is the first race that had such a huge number..and not just in CSU.
Done!
I probably lost about a minute taking pictures, but it's well worth it. I think I'll do this every race from now on. I get an A.
Spent about an hour and 15 minutes..was hoping to find Arthur (SeniorRunner) but never saw him. (he did great on his first full marathon!). I did meet one of the Marathon Maniacs that I'd said hello to as I passed him on the course. He's name is "Irish Joe" and I'll tell more about that later. 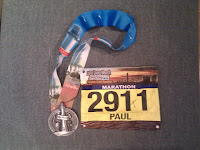 Stats: 4:25 is the same time as my very first marathon. I was shocked given all the walking that I could do so well as that. I'm also shocked my relative place is as good as it is.