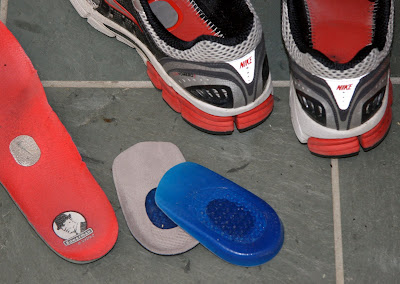 Since I started running two years ago I have not experienced any injuries. I've felt little twinges...but stretches and rest always solved whatever niggly rumblings I had. But, it turns out it was really flurting with Achilles Tendonitis for quite a while and not realizing it..

I've always felt a bit stiff in the legs in the morning, and had to do extensive stretching after trotting about a quarter mile. However, I had NEVER had any pain or problems during my run.

Sharing the Spa with the Incredible Hulk

One night Toni in were using our spa (works wonders for recovering old bones) and I sat up on the edge to cool off for a bit. I propped my legs up on the opposite wall to get them out of the water and looked at my calves. "Hey!? What happened to THEM? "They are really huge compared to a couple of months ago?!".

A Big Bunch of Hubris

As you might imagine from the above, my training had been going really well, and I'd been pushing the speedwork..I knew this was dangerous, but really was improving so fast I could not resist.

One day, I was doing a 10 mile run, with 4 miles of it at "tempo pace" (i.e. about an 8:20 mile) in the middle. I had just started the tempo run when I noticed I was very gradually catching up to a young guy in front of me. Not to be rude, I said good morning....after chatting for a minute it turned out he was basically trying to do the same pace so we ran together.

After about 4-5 minutes, it became clear to me that something was wrong with him...he was not able to sustain the pace and talk at the same time, eventually he told me he needed to slow down.

"Wow", I thought to myself, I really have improved since 2 years ago!..Hmm. yes, well, as it turns out that run was the straw that broke the camel's back.....

After a full rest day, two days later I went out for a run and found my tendons were hurting with every step. I mean really sharp pain.....I limped to my stretching place and even after stretching for 15 minutes the pain was there when I attempted to run. I ran a very slow 1 mile and decided to call it quits. I was pretty shocked and upset.

After searching the internet, I realized I'd better take off as much time as it took to heal them up.

I waited about a week and then attempted another very gentle run. This time I got about 4 miles in and started to feel a little pain on one heel. Luckily I was doing a circular route and could abort back home. I was really bummed...I have never had any pain when running or after and now I had both.

Just how was I going to run the SF marathon (a HILLY marathon to boot) in just 5 weeks???...obviously, I was a goner for this marathon. You stupid, stupid, idiot, I thought. Every time I saw somebody running it tore me up...I realized how important running had become to me and I was fearful I would not heal up properly.

A week later, I tried another run. I felt pretty good and went along for about 6 miles....but the same thing happened again and I was hurting and forced to abort at 7 miles. DAMN IT. Why wasn't I getting better? I was icing my heels 2 or 3 times a day, attempting to do gentle stretches of my calves (which hurt!) and not running at ALL...........Argh!

Back to the Internets

Eventually, I figured out what I might be missing. Let me try to explain why I was 'stuck' in this injury:

a) My calve muscles had gotten much larger in the last month in reaction to my training, my fast paces were using those muscles to good effect but this was stressing my tendon..more importantly my new bunchy, STIFF, big calves were not properly stretched out and this stressed my tendon all the time. [Getting up after sleeping, sitting at work for a long time, then would shorten up and my tendons would really hurt when I got up and walked around]

c) THEREFORE before you can work on stretching the calves, you first need to de-inflame the tendons. in my case the trick was to wear small HEEL LIFTS (see title photo..they are Dr Scholls) in my shoes during the day, and to keep a pair of slip-on shoes with lifts in them during the night so that if I had to get up to use the bathroom I would not freak out the tendons.

d)This worked great. Within 3 days my tendons felt *much* better, I started stretching them very gently a few times during the day and also doing some 1-2 mile walks (with the heel lifts in all the time). I still felt really stupid that I couldn't run but was happy to at least see/feel some improvement.

Three weeks before the marathon I thought I felt pretty good, but I'd done no serious running for quite a while and decided I needed to try one last long run to know I could do the marathon and not crap out in the middle. So I did an 18 miler with hills and golly gee but I HAD NO PAIN. Yes, my tendons were a bit tight after, but I used the lifts and then stretched after a day of that and it was good again. YAY!

At three weeks you are already into your taper to the marathon..except I'd already been forced to taper. I had no idea how this was going to work out, but I was in such good shape before all this happened I figured I had enough base to do ok and I should err on the side of given my tendons plenty more rest.

I was comforted by having read about famous runners (e.g. Emil Zatopek) that had done some record-setting runs after being injured. Most runners overtrain and sometimes a bit of extra enforced rest is a Good Thing. So I tried not to worry about *that*.

As you can see from my previous posting, I did fine in the SF run, and didn't hurt myself or anything, I did no running for almost two weeks after the marathon. For the first 3 days you are sore and it's obvious you shouldn't run (but walking is a very good idea) then you feel better but still should not do any hard running..very easy does it. This weekend (three weeks after) I plan to do a long (16+) run, but slow and easy.

What else am I going to do to prevent this from happening again?