Any day you can run a marathon is a great day! 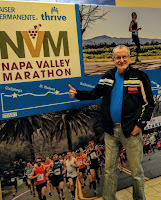 This is still true 8).  (Especially after having had a hip replacement!)

We hit the expo (a very small one in the Napa Marriott) to pick up the bib and got a very nice zip bag with the marathon logo.

Off to Bottega for a Polpo salad and double portion of a very nice vegan pasta and  a couple of glasses of wine we headed up to the Calistoga Motor Lodge which is just a few steps from the start. 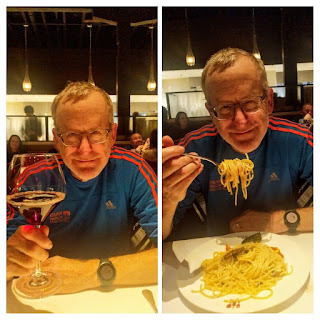 This place had been renovated recently and was really nice ..I was glad I signed up early as it was pretty close to full. We had a nice end unit and was very quiet.

I slept well but got up at my usual 6:45am (start time 7:30) and started getting prepped. I do everything according to checklists as my cognition is poor at that hour ;)

Walked to the start about 7:15am. There were the usual pacers with target pace signs on sticks in the crowd of about 1696 marathon runners. The usual national anthem (sung by local high schoolers) and off we go down the SiIverado Trail  (the road that runs down the east side of Napa Valley) 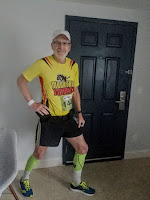 At first all I could think was "Hey, it's been a while since I've done one of these". I had many  conflicting thoughts: I knew my training had gone well, but it had been a long time since I've run a marathon and I had just worked my self back from my hip replacement. Were my muscles ready?

I have not been running many hills in training (no big ones where I run in the baylands) and I once I hit some of the big ones .... I slowed down (of course) on the ups, but did not make back the time lost on the downs. My average pace was about 10:47 after the first 8 miles and it pretty much stuck there. I was not unhappy with that so decided to just see how I felt  and run to that.

My mile splits bounced around quite a bit between 11+ and 10:30 but my overall average pace stayed the same the entire race. I was not confident this would stay true.

The weather was really too hot (about 50F..I prefer 45F) but not a disaster. It was cloudy and so there was no sun.

Toni managed to get to the mile 9 split:  it's not easy to spectate this race as there are roads that enter the Silverado trail but there isn't much side parking on most of them. I gave Toni the cowbell that we used in previous races and it's great: It has a different tone than the usual ones sold at marathon expos. I was able to pick out the sound far before I could actually see Toni..this was fun!

I caught up to the 10:50 pacer-guided runners and my watch was showing an estimated 4:42 marathon... so I mentioned this to them...there were going out fast.  They had reasons for going so fast but in my opinion they don't make sense:  I think the best marathon is one that is run with even splits or maybe slightly negative.

I continued on to the half marathon point. Along the way about every 2.5 miles the aid stations were manned by the locals and school volunteers and they did a great job..as they also did back in 2009. I took only water but they also had Nuun, and after 20 miles they had some orange slices and other things. I'm pretty self sufficient with my gels I take every 45 min, so I only took water.

At the half marathon split it was time to evaluate and I thought to myself, "hmm I feel more toasted in my legs than I think I should be, given this pace": that had me concerned.  At around this point a nasty headwind had developed. Probably around 5-10 mph on the nose. A rule of thumb on the internet is that a wind about the same as your pace costs you about 12s mile. This wind was stronger and so was probably costing me 15s - 20s per mile of equivalent effort. I stayed at 10:48 but probably would have been able to speed up a tad otherwise.

This race is so sparse with runners that drafting is not really an option. In a crowded race you can get away with it. (especially if the victim is listening to music with earbuds 8)...but here, no. 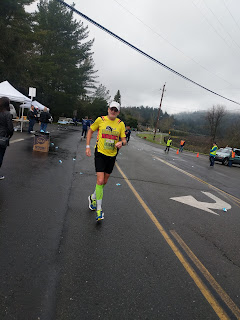 Drafting works really well to reduce running energy cost and actually benefits BOTH runners: the follower gets the windbreak, but still has suction from the vortex shedding off the back, and the leader breaks the wind but has no vortex shedding.

A danger is that you overstride and hit the foot of the leader: they go down..HARD (since they have no warning) . Therefore, you need to stay well back! You can feel when you are in the draft on your ears and face..there's a buffeting feeling to the wind.

The miles ticked by....at 16 I felt a bit better about my relative level of leg 'toastedness' of the legs. So I kept on keeping on.

Right around here I heard Toni's cowbell again and we had another meet up. I was (as always) pretty gross with drippy nose etc so I only kiss her on the forehead 8). As I departed Toni pointed out the sun was coming out (notice shadow in the very last photo of me waving goodbye after the results) and I turned back and said, 'Yes, and that is BAD.". It was getting too warm.

From about mile 8 to now we all at settled out in our pace order.  I was only passing people that had gone out way way too fast and were slowing down.  It always amazes me the people that think they can run a marathon with minimal training.. when you hear a guy huffing and puffing at mile 8 it's not good.

These people that try to 'bull their way' through a marathon all seem to wear earbuds, thinking that music will pull them through. Music and determination will only get you so far..in a marathon you need grit but you also need to be smart.  Grit gets you the last 10%  (which is a lot!) but without a training base you are doomed to have a bad day (unless you have some amazing genetics or grew up running to school every day like the African elite runners). I passed several people in this situation early in the race and never saw them again.

As usual, several people were doing a 'run / walk' method, which works very well from what I've heard. There is some advantage their, there say...it makes some sense since virtually every ultramarathon runner does at least some of this.

I early on I was passed by a few people from time to time and one of them was a women with a fairly big tattoo on the back of her left calf that said "Run."

At this race there is a very very long hill from mile 19 to 20.5. I ground up that hill and then bombed down the back side happy to know that was it for the hills. Sadly the downhill is too steep to optimally milk the altitude for speed:  you have to brake a bit every step.

On the final 6 miles is where you make or break..this is the infamous "Wall" territory. I was doing pretty well but listening to my body for any problems. I found one: my left thigh was sending me some 'tweeky' micro spasms from time to time. Not much,  but enough to notice. I changed up form a bit to try to help shift the stress to other muscles but it was still there.

Legs were more and more into 'dark toast' (aka BURNT) territory but I could still hold the same pace, on average. Earlier the miles had gone by fairly quickly, but now they were taking longer and longer. I was passing more people that were run-walking by now.

At mile 23 I caught up to the women with the "Run." tattoo ..she had been walking and when she started running I happened to be passing her at that moment. I asked her if it was a real tattoo or washable one and was the real deal. 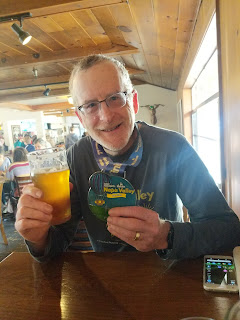 In this last miles, if you are prepared you can hold pace but it costs more and more effort the farther you go. Luckily when you start to get close..i.e. about less than 2 miles..knowing the finish is so close gives you some energy and so, both of us held pace fairly well, slowing down to about 11:00m/m. She had had more left in the tank clearly so I told her to take off about about half mile to go.

I waited until the last .2 of the 26.2 to go faster.....my split there shows 9m/m. Lots of cheering people and hearing the announcer call out your name and city in the final 50 meters helps too 8)

In the end I did a small negative split..20 seconds faster in the second half..pretty proud of that.  My right hip felt totally fine the entire race (and now afterward). 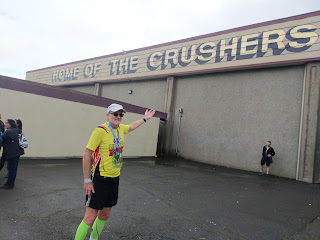 This race was famous for letting you use the showers in the Gym area (The "Home of the Crushers"). However a big FAIL: the showers were non-functional..no water at ALL. What? Do they have wells there? So....cleaned up with some paper towels and off to Hop Creek Brewery for Beer and Burger and then the drive home.

NB: A big thanks to Dr. Graw and the folks at PAMF orthopedics, and to my
physical therapist, Sonja Bauer 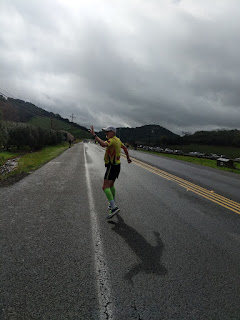