Monday was a rest day as per usual, and Tuesday rather than running I did my 10-10-10min workout (bike-ellip-row) followed by lower body exercises. This workout is really satisfying and takes about one hour.

I have been self-massaging to work out my calf trigger (ouch!) and also using the spa every night and it has helped a lot.

Wed I took it easy and did 3.3 easy miles. I felt really good but kept the speed down. I was wearing a new pair of Brookes Launches ...it turns out my old pair (from 5/13)  although not worn down much on the forefoot, has about 400 miles on them. The foam is pretty shot. I am also wearing a new pair of CEP calf sleeves, more on those in another post.

I had zero lingering problems after Wednesday's run..not during after or the morning after so I went out the next day for a slightly longer run.


Sigh, I did this run way too fast..but I had two excuses 1) I felt no problems at all 2) I was wearing another new "mystery" shoe that is much lighter than the Brooks but has excellent forefoot cushioning.

Saturday I decided to do my longer run of the weekend as Sunday morning would be short on time. I didn't know if I'd go as far as 16-17 but thought I might if everything cooperated.


When I started this run it was 61F and overcast. By mile 5 or so the sun was out and it gradually warmed up.  I did a good job hydrating and even had to stop at the Shoreline bathrooms at mile 10 to take a leak. By then it was too hot for doing 16 and decided to cut straight for home which would be 14 or so.
The right calf was making itself known a bit  after mile 10 ..I thought I might have to drop the pace (mile 11 slower) but eventually I found that if I reverted to my super efficient shuffle stride I didn't notice it anymore, so I did that for the rest of the run. When I got home I iced the calf by putting some ice in a ziploc inside my sleeve and that helped a lot at preventing any lingering effects.

I was happy to run that well in such sunny and warm conditions (for me! I know some of you have to deal with much nastier stuff!).  I'm a bit worried that Berlin is going to be hot..it's only about a month away and they just had some of the hottest days ever in Europe...Yikes! 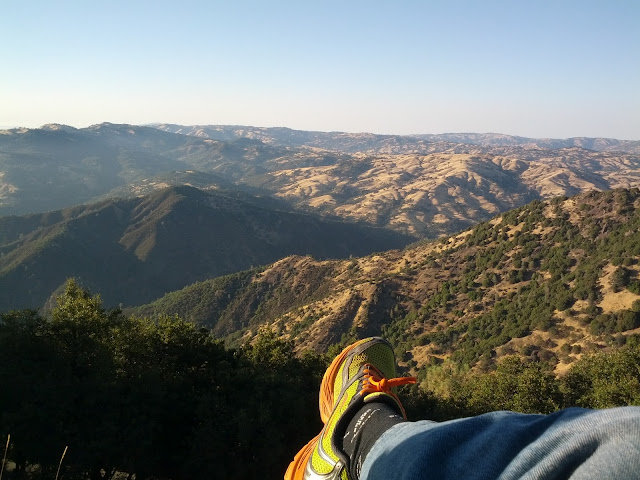 Later that day we drove up to Lick Observatory @ 4200'  and had a picnic lunch on a small deck looking out over the open spaces of Mt Hamilton open space preserves. This is the view I had sitting with my legs crossed and sipping a nice rose wine and eating a picnic dinner 8) There is no sign of human habitation and barely any roads in this shot. (We were there for their "Music of the Spheres" concert series). 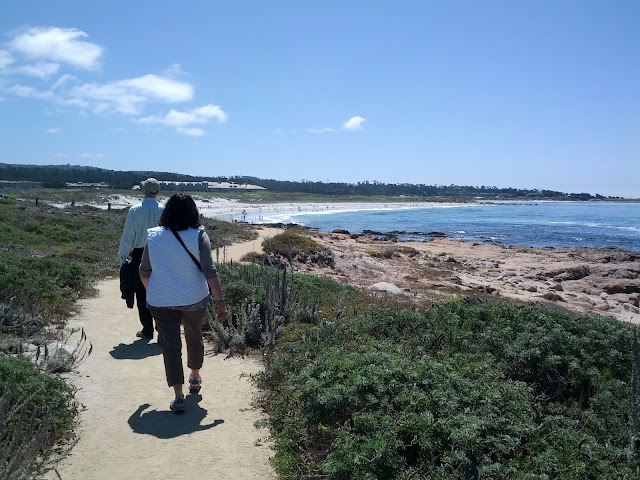 The next day we visited our friends at their house in Pacific Grove (on Monterey Peninsula)  ..it turned out to be a beautiful day! We did about 8 miles of walking which was perfect for me! The photo above is Asilomar State Beach.

So  it seems my calf is getting better reasonably quickly ..still not 100% but a few more days and I think it will be fine for non-speedwork paces at any distance. Ragnar planning is heating up..we are figuring out the details now with the help of our fearless leader! My current plan is to take the legs at 9:30 average or so...maybe slower if I feel like it. It's my first relay and I don't want to kill myself for Berlin.