That's the word the younguns would use to describe this mornings run.


I am traveling to DC and so Jill moved the Sunday run to today since I could not spare 3+ hours on Sunday when I am in DC. Last night I had two bowls of pasta with artichoke-olive sauce in preparation. 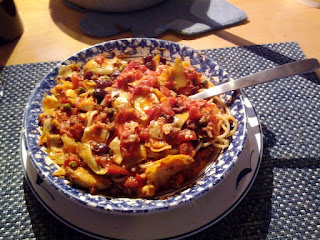 For the first time in a looong while, I got up early (6am) to get the run done and not be into work too late. It was cloudy so no stars out and also not as cold as it normally would be. There was no wind.


I had my stuff ready before I went to bed so I was out the door in a few minutes....still feeling sleepy. After a quarter mile I was at my favorite stretching place and glanced at my watch and saw the pace was in the 12:xx range! Yikes! I though I was running pretty fast but the Garmin said nope.


After stretching for a minute or two I continued and found it very hard to speed up. I was wearing my Kinvaras (with my new lift in left shoe) for the first time in a while..my left foot issue seemed to be pretty cleared up after wearing the Brooks Launches and I wanted to see if I could get back into the K's for base pace runs. (I'll still use the Brooks for hard runs).


The Brooks are cushy, but I don't want to get too used to cushy ..bad old  AT got started from doing that.  Also the Brooks are HEAVY: almost 2 oz heavier than the K's. They also absorb more water in the rain becoming even heavier (the Kinvaras have these really nice mesh uppers that don't hold water).


I was a bit worried that the K's would make my feet hurt or something so I did a first minor loop of 7 miles that would give me a chance to swing by the house and change shoes if I needed to.


Eventually, I warmed up and was able to speed up to high base pace by mile 4. After the first 5-6 miles I could tell I was in some kind of zone... the HRs were way low for that pace. You may recall my 13 mile run where this happened...but that was at a low base pace.

This continued for the entire run...I just could not believe how good I felt clicking off these 9:xx miles with crazy low HRs. From miles 9 to 14 I was on trails and this didn't even mess things up.

I was wondering if I should push the last few miles as I normally would do...but I was going pretty fast already and in the K's too..so far so good but might I  regret it later?

When I got to mile 16 I said F-it and dropped my little sub-9 minute 'hammer': when you are feeling so good it's time to push.  The last 4 miles felt great..at no time did I feel like I was going all-out. Mile 18 was a bit slower but there is the 50' pedestrian overpass climb done there. The left foot was fine during and now, after.