Week 10 CIM: On traveling and training, part I

It's been a while since I've posted...(except my pre-scheduled tuesday haiku's). I've been traveling and it's been hard to find the time to keep up with all of your blogs, never mind post to my own.


I'm going to do a few retroactive posts...highlighting a few of my runs when I was on the road. I want to document the CIM build-up because it's so different from my usual routine and I figure they'll be lessons learned to be remembered.
What is "CIM", you ask? I'm still  training for the California International Marathon on Dec 5th. As you may recall I took some major time off to let my calf strain heal up (5 weeks) and also at the prodding of my coach Jill, I took the leap into doing some PT to try to correct some massive leg asymmetries that I assumed were unfixable. I also caught a cold and lost a couple of weeks there too.
I feel stronger and better than ever in many ways but I feel a bit shy of the time I  really need to prepare for a PR attempt. I'm never completely sure I understand my body and how it's going to perform during a marathon. I will be shy a lot of base miles but I do have a lot of 20+ mile runs on my legs now after a few years and there is a school of thought that says the more of these you have done the more endurance you have ..in a lasting way. (Some theories of muscle retraining to slow-twitch use).
All that said, of course I'm going to try to get Jill's training done as best I can and try for a PR...if I don't make it I'll re-peak for a spring race. Heck , even if I do make it I'll do a spring race ;)
Anywho, the reason I've been off line is another common event in my life: i was traveling. The primary reason for this trip was to attend my niece's wedding in western Mass. After that Toni and I made a vacation out of it to Canada, ending up in Buffalo and flying back from there.
On this trip I had permission to keep up my full level of training 8). That doesn't mean it's possible! On a short business trip by yourself it's relatively easy: a couple of workouts on the treadmill and you're home again.


But on a long trip with lots of vigorous tourism going on?...well..sometimes all the walking around and staying up late can make it difficult to do full bore marathon training.... I have to get the runs done in the morning before I steal too much time from the day so it's staying up up late and getting up early sometimes!
One of the other challenges of traveling and training is finding a place to do all the running. You don't always have treadmills to use and you may get sick of using them ;) You can't run a 10k at race pace in city streets with traffic lights and broken pavement.


Our first stop was Boston, where we rented the car for our junket. We stayed with friends in Arlington (pronounced ahhhlington ;). I had to do a workout with 4 miles of 10k pace, luckily our friends new the perfect place to run: the Minuteman Bikeway.


It's a old rail line that was re-purposed....beautiful tree-lined path right through the middle of the Boston suburbs!
This was pretty sweet..one mile to the trail from their house and one mile back made for the perfect warm up and cool down.


When I got to the trail I was sipping some water before starting out (and taking the picture) and a young guy went by at a good clip with a very heavy backpack on.


When I started running I saw I was gradually gained on him, but alas I hit my halfway point just about 50 meters shy of him and so didn't speak with him. I think he was commuting to work by running and had all his stuff in the backpack (clothes, laptop, etc). Awesome.


Two days later we were out in western Mass: the town of Deerfield were the wedding was being held. I had 14 miles at base pace on the schedule this day and so I ran from our hotel up to (and around in) historic Deerfield.  We had been there during the previous day and taken the house tours etc. But it was very much more fun to run down the streets early in the morning when it was quiet. I was also lucky that the previous days rain was holding off! 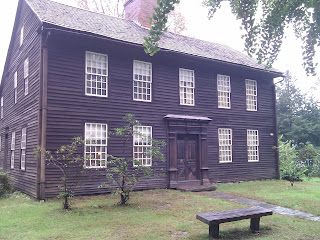 It was almost exactly 6 miles from our hotel to the  Deerfield and I needed more water when I got there....(too much alcohol can do that the night before ;)


Luckily the restroom building at the visitor's center was unlocked...I walked in and turned on the lights and had a nice civilized use of the facilities and filled up my single bottle. (My double bottle pack too more more stuff to take on the trip). 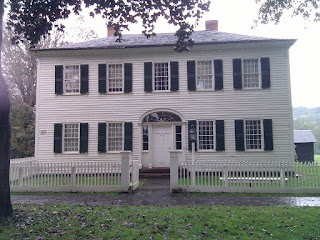 After proceeding north through town I wandered down into the corn fields and then hit 7 miles, so I turned around and re-traced my route back to the hotel.


You can see from the splits that I did a base pace run @ 9:46. HR was a bit high at 122 for that pace but it was quite humid and frankly I'm not in my comfy home environment and therefore not as fully rested. But it was a solid run and not hard.

So, Week 10 ended pretty much done as written (38 miles)...I've left out the less interesting runs from the story!