The race course is actually quite neat..you start on the east side of the city (the bay) and run right across the city from east to west and finish at Ocean Beach...i.e. the Pacific ocean. It's a very popular race, this year over 55,000 people have registered to run it (!).
The race is quite famous for all the zany costumes people wear....there are prizes etc for the best but lots of people do it just to have fun. The race is also infamous for the people that run it naked...you aren't supposed to but it's pretty hard to enforce.
There have been problems with some people using the race as a big party and excuse to get wasted..and the neighborhoods have complained..so this year the race organizers and SF police, as well as all the runners, will hopefully keep things better under control so the race can continue for another 100 years.
Four years ago (march 2007) I was 51 yrs old and had just had a physical where my doctor had told me all sorts of bad stuff..you can read about it in my FAQ here.  I decided then and there that I needed to take care of myself from then on...I wasn't getting any younger and it was really important now.
I had only been running and dieting for a couple of months but I decided to run the B2B and Toni and some good friends of ours decided to walk it. Here's a picture of me and Toni before the start.
Toni was dressed as a Viking and I went for just some general wackiness with my flame socks and Wallace and Gromit t-shirt (Cracking Toast Gromit!)
The race was tough for me. I was heavy and out of shape...but I kept a steady pace of 12:23 m/m. Today that pace seems so very very  slow. I remember running it all except for the Hayes street hill, but I would have a hard time running that slow now. 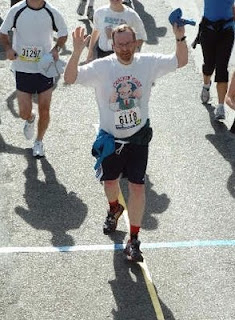 Here's the finish shot of me.. boy was I tired. I had some leg cramps that made me stop for a half a minute and stretch out..I was lucky nothing broke. I guessing I was still about  30 lbs heavier than I am now.
We had a great time that day.....here's another pic of Toni with our friends Lars and Jonna that lived near us until recently.  They also walked the race and had a enjoyed crossing SF on foot.
The following year (2008) I ran the B2B at a 9:09 pace. After a full year of running, and now down to my 170-ish weight I was ready to try some other races.
I took and eye toward the Napa Valley Marathon which was 3/1/2009 and trained for and ran that at an even pace to finish in 4:25.
It was Napa that caused me to start writing this blog (after some friends got tired of me talking about things running all the time!).  The Napa race report was my very first blog entry.
Sadly, our friends Jonna and Lars had to move back to Denmark, so Toni and I are going to visit them there shortly. I will be running the Copenhagen Marathon which will be my 10th marathon (7 in my year-of-8).
I hope everybody running the B2B on Sunday has a lot of fun!  Next Sunday I'll be across the big pond running my race ..and I'll remember my first B2B and how far I've come since then!
Posted by Paul on Friday, May 13, 2011