One of the things I like about running (vs say, biking) is the minimal amount of gear you have to have.


But that said, everybody likes to spend money on their hobby 8). Part of the fun is figuring out exactly what you want to make your experience more enjoyable. By sharing my decision making process perhaps I can help you optimize yours.


Therefore, over the next few weeks, I'm going to discuss all the gear I've purchased and how it's worked out.


Early into my first marathon training (this was BB, before blogging), I was just starting to do long-ish runs (10 miles +).  Up until that point I had didn't have any way to carry water or food with me and knew I was going to need a hydration belt of some kind.
After heading over to Zombie Runner and checked out some of the products they carry. As always the staff there is helpful (and lots of running skill abounds). I chose an "Ultimate Direction" product: 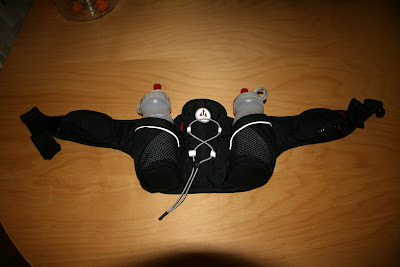 This is a dual bottle belt...I figured I could always just leave one bottle home if I wanted to carry less weight. The belt has a center compartment shown better here: 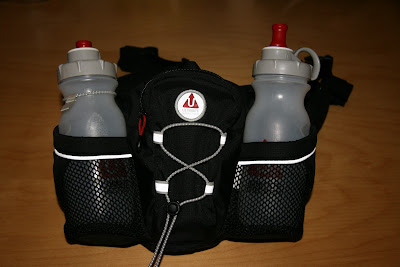 Here you can also see why I chose this brand: the bottles have unusual spigots...they are rubber and can extend or retract. (I've shown one out and one in) You can pull it out with your teeth holding the bottle in one hand. No matter how rough the running there is no banging of your teeth since the rubber is very soft.

There is a small slot at the end of the red rubber part that keeps the water in but when you suck on the bottle while squeezing you get plenty of fluid (although my wife finds them too stiff to squeeze easily).

I find carrying two bottles (they are 20oz each I think) is sufficient if the temps are low (50-60F), If the temps are higher, then I need to make sure I do a route with a refill spot on the way.


I should also mention that my strategy for marathon hydration is to always avoid the supplied Powerade, Cytomax, etc and drink only water and carry my own GU packs for calories and electrolytes. The reason I do this is that every race chooses a different drink and some of them are quite foul.


I train for this of course: I always take water and my GUs ..refilling mid-run, only water is needed. In addition, in hot weather, I can squirt my water bottle onto my head or chest....Cytomax would be a bit sticky for that ;)


(NB: They'll be another article about why my choices for GU and other foods to eat with the water)


One last thing to note about the bottles...I've deployed the 'keeper strap' around the left bottle. This is mostly used when you are not wearing the belt (i.e tossing it into your trunk) and the bottles are full...it keeps them from falling out. During the run you flip them up and off the bottles and since they are upright they don't fall out, even during trail running etc.

The side pockets aren't huge, but can hold enough gels/chomps for 4 hour runs+. I like the fact that the belt overall is wide and the clips are beefy...the weight is distributed nicely. In fact, it  feels like it holds your back in place better than with no belt...kinda like a weight lifter's belt. I really have no problems running with it (other than lugging more weight).

The extra belt length you don't need can be wrapped up and there's a small elastic loop on the belt that holds it together thusly: 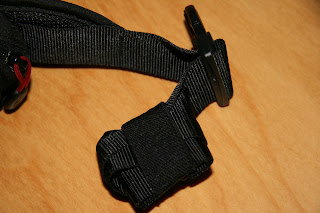 ----------
For short runs, I always like to carry my cell phone and house keys, and I got tired of the former banging around in my shorts (either back pocket or side pocket....) And keeping keys with the cell phone isn't a good idea unless they are seperated. So I got this at a running expo: 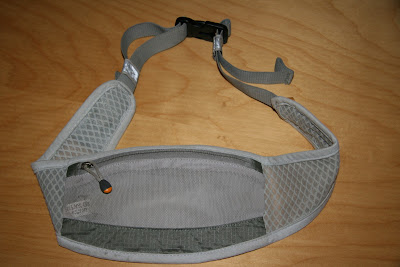 It's very slim, padded a bit and fits in the small of your back with the buckle in front. It actually has a little pockets inside which can keep your keys off your phone, or you can just schooch the keys to one side, phone on the other. I put my phone in a ziploc bag during a race where I might dump water on myself for cooling.
If your shirt is not tucked in this thing out of sight completely...so you can look svelte and unencumbered. It can actually fit more stuff than I carry but it will start to bulge a bit.
When you need to get your phone, you can just spin the whole belt around pretty easily (so the pouch is in front) and zip it open.
....
The last purchase was for marathon races ...there you get plenty of access to water, but I need to carry my own gels, etc (as well as cell phone, ID, money, salt tablets, ibprofen, glasses cleaner, etc).
What I really wanted was just a belt with a couple of pouches so I could carry things, but I ended up with this: 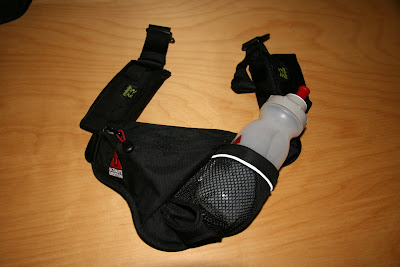 It's another Ultima product, but a single bottle. The main compartment is not that big..very slim. I've added two kinds of amphipod pouches to the belt, a longer one: 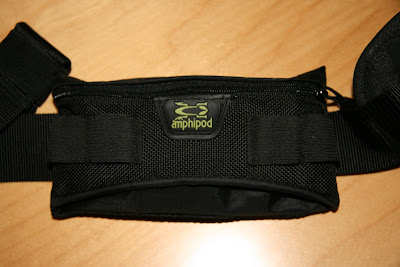 And a shorter one: 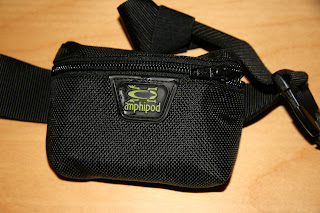 These pouches give me much more volume and can slide around on the belt (which is nice actually).
I got the single bottle model because I also sometimes thought I would like to stage my gel-taking when there doesn't happen to be a water stop.
In practice I've decided to just deal with waiting until the existing water stops..usually there are tons of them.
And, the other problem is that the bottle pouch on this model really grabs the bottle too hard (to keep it from falling out since it's on an angle). This really sucks..it takes TWO hands to get the thing out and in: left hand around back holding bottom of pouch down and right hand around back pulling out the bottle.
It's not fun to run with two hands behind your back. In fact during the late phases of my PR marathon run at SF my left leg would go into mild spasms every time I reached around behind me...it messed up my stride that much.
So, I'll probably get some webbing and buckles at REI, move the amphipods over and have my marathon belt as originally planned. (I also can carry my small camera this way too as I did during the Long Beach Marathon)
I still do use this single bottle belt for runs from 8-13 miles where the dual belt is too much...but it's really just a nice-to-have.
There you have it!.... that's the scoop on my hydration belts.
Any questions [8-) ?

A light week this week, 20 miles of easy running and some cross training Sunday.

(Taking it easy on my left ITB and legs in general).

Today for the first time I tried rowing.... vigorously for 10 minutes to see if I like it ..and it was fun!  It's another cross exercise (besides biking) that gives the regular running muscles a break.