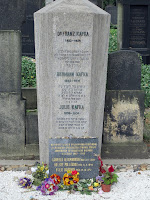 Recently I was attending a conference in Prague. Being jet-lagged I kept waking up at the crack of dawn, so I decided to do some running before breakfast.

The streets are pretty busy where I was staying (about 4 metro stops from the old down) and I wanted to avoid having to cross a street every 30 seconds. In looking at the map, I found I was next to two large cemeteries.

This worked out well, the distance around them was about 2 miles, and I had a slight up and downhill for variety. Not the best of conditions, what with lots of old-style diesel trucks as well as new-style czechs smoking their brains out on the way to work, but hey, it worked.

I did this run 3 times (2 or 3 loops each time), and only once saw another runner. (interestingly of similar vintage to myself). Alas, he ignored me.

Eventually I learned that buried in one of the cemeteries was the grave of Franz Kafka, so I went to visit him (see photo). I didn't really know I was running circles around him every morning...

Putting on two shoes and going out the door to run is about as un-kafkaesque an activity as there is.
Posted by Paul on Tuesday, September 15, 2009