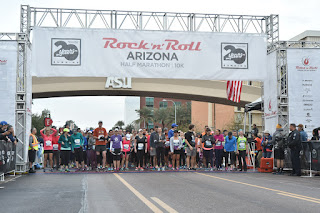 After I ran the Marine Corp Marathon, number 29, Toni asked me "What is number 30?". At the time I had only signed up for the Oakland marathon (a somewhat local race). Toni wanted me to run my 30th at someplace more special than the Oakland Marathon and I was not adverse to that so I suggested Phoenix. It's pretty decent weather there in the winter..but it can still be a bit hot.

I have to admit I've always been a bit negative towards Rock n Roll events. I think that probably stems from reading about some bad stuff that happened at the 2011 Las Vegas marathon.

We decided on a quick visit: fly in Saturday afternoon, and out Sunday late afternoon. We stayed at the Hotel Palomar (a Kimpton hotel) which worked out really well..they gave us 2pm checkout and were super close to the start and to the metro rail which got us back from the finish..no car rental required.

Yes, this race is a point-to-point race, which I always like (you feel like your getting someplace). The course is billed as flat, but it does have 200' climb and descent and and an annoying 60' steep bump-up hill at mile 25.

Bib pickup was easy and wall organized. The Expo space had lots of room and booths were spaced apart more than usual.  I didn't have much to do there after the bib pickup but appreciated that it was not packed (and close to the hotel) 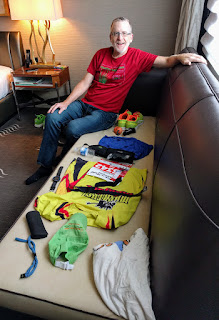 The weather forecast settled on 52-55F and cloudy all day. YES!!!

I laid out my gear..(see photo). By now it's easy but I always use my checklist ....to easy to spaz out and forget something.

At the start it was cool but not cold. A bit warmer than ideal but nothing to whine about. I had a disposable T-shirt but ditched it early.

I have gradually been upping my game. I have some tools to let me look at the training vs some other buildups and decided to target as a primary goal a sub-10 minute pace.  I've been pretty busy and also getting older since my last sub-10 m/m pace in 2014. Here's how my training compared to Marine Corp: 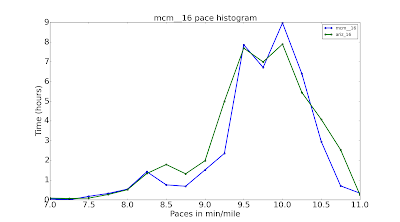 You can see (green is this buildup, blue is marine corp buildup) I've done a bit more hard running. What it doesn't show is the extra work in the gym and more long runs. 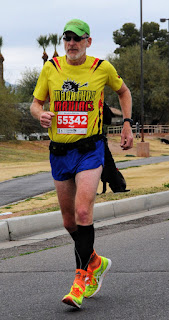 Off we went and headed north. I was trying for a 9:50 pace (allowing for 5s of non-tangent running and 5s to finish faster than 10 m/m pace.)

The first 3-4 miles had no mile markers but eventually they were there and done really well: A big clock showing gun time which was visible way in the distance and accurate positioning (at least according to  my GPS watch).

The course has mostly very straight runs (marathon course in red..wind from the left): 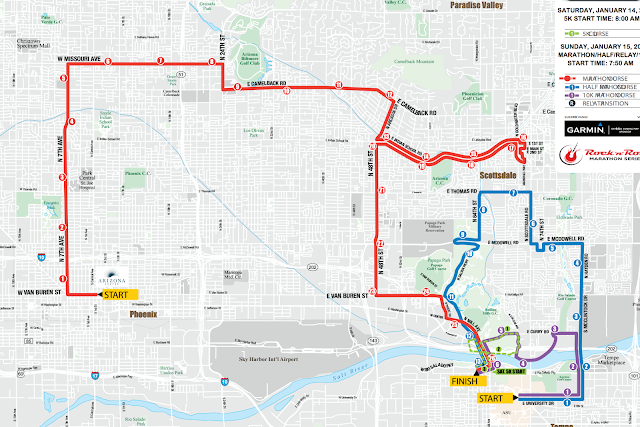 As I ran I noticed that the gps noise was nil, and so the mileage was matching the mile markers. In fact for the first time in ANY race, as I proceeded my GPS watch was under-reading vs reality.

I was eating a GU Roctane every 3 miles and taking a half cup of water every water stop. There were a lot of water stops (every other had some energy drink). I didn't feel hot, but I know how these things go...you don't get much in you at each stop so I took a cup at every stop until about mile 23. They used paper cups....kudos for that!

The RnR bands were nice. I'm a sucker for good music of many types and I have to say it was fun that every couple of miles was a new band.

At about mile 5.5 I turned to the east which was downwind. This was good but there was an uphill starting where we gain about 250' until mile 15. You would not think you could notice this but I run so much I can tell..no problemo. The tailwind helped offset it, thankfully. Along this part i spoke with some other runners, tried to stay relaxed and kept my pace at under 9:55 / mile. 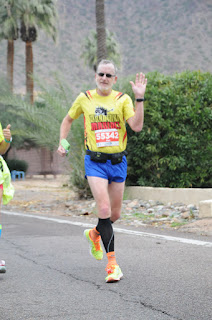 The miles ticked by pretty quickly and I noticed that my watch was starting to chime the mile AFTER I passed the mile markers. This has NEVER happened before in any marathon. The terrain was very open (very low-rise buildings) so GPS reception was good but still...CIM was pretty open too but didn't happen there.

Eventually hit the half marathon point and started the out-and-back section from mile 13 to mile 20. I could see some of the barn-burners already 7 miles ahead  and hitting mile 20 when I was just hitting mile 13 (sigh ;)  Already there were people walking, and I was starting to continuously pass people more and more.

Once I made the turnaround at about mile 16.5 the wind was apparent. The perceived effort went up noticeably. Ugh. I tried to find some big guys to draft but the crowds was pretty thin.

Just when I was giving up on seeing Toni..(I figured she'd gone right to the finish) there she was at the 20 mile point! She took this harried video of me: 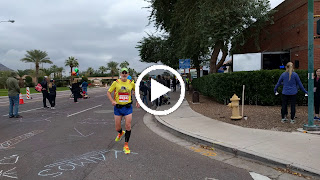 I gave her a little touch-hug (I was sweaty 8) and reminder her she had about 1 hour to get to the finish before me.

Now we were heading south toward the the finish. The wind was a crosswind but it was 20+ miles into the race and "Wall"-time. My legs felt pretty good but I was monitoring them closely. I decided to stop banking time and stick to 10:00 per mile or so until I got closer to the finish. Things can unravel quickly at 20+.

I had been doing a super good job of running the tangents..this was very easy to do in this race and so the mile markers starting to come earlier and earlier vs the watch. So bizzare. (I swear I was not cutting the course in any way)

The fatigue in my legs gradually built up over the miles and then at mile 25 UGH, a 60' steep bump up hill. At this point there was no way I could power over it...I walked it for about 30s to get over it and that was that for 4:1X time..

I have to tell you, at this point in a race you are counting down the minutes. The metric is "perceived effort"...and I'd been seeing it increase inexorably since mile 20.

When I got to the top of this little hill there were a couple of guys that said "only ONE mile to go". Usually such people are speaking 'roughly' and so I ignore them. People will say "only one mile to go" and I'll KNOW it's 1.5.

I want to tell such people to STFU, but I know they don't mean to be cruel ;)

These guys  seemed to say it in a way that was serious: they sounded like marathoners. I realized with my dim cognition that my watch was off and I had banked the .2 (of the 26.2) already!

That was a lift! I resumed my sub-10 pace once I crested the hill. Eventually I got to the overpass that crossed the river/canal...dimly in the distance I heard the low-pitched cowbell I had given Toni: She made it to the finish area!

Toni catching me on the bridge approach: 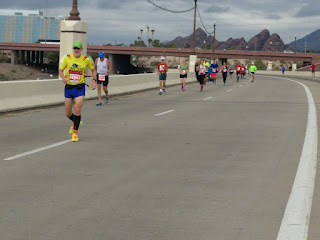 I hit the downhlll and banged through the finish in 4:20:25.  Met my goal! Not my stretch goal by 25 seconds due to that pesky hill 8)

At the finish time to collect my finisher's marathon jacket. What a nice touch! I found this RnR event to be one of the best organized races I've run.

A nice collage of photos by Toni: 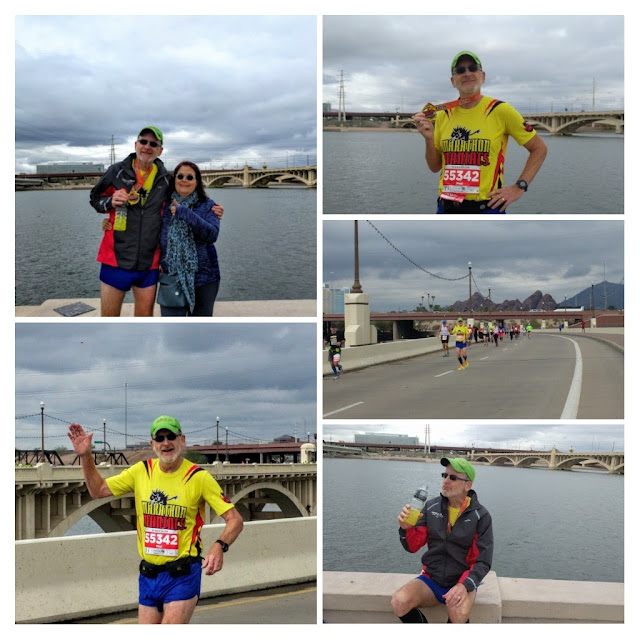 Had to wait awhile to get the tram / train back to the hotel and then time to enjoy our usual post race beer and burger at Kettle Black Kitchen and Pub: 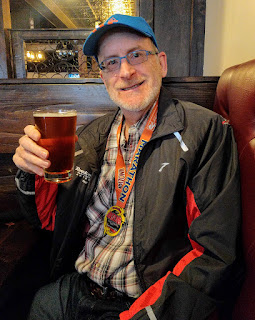 The race was well run, and the weather was pretty ideal (Another 10F cooler would have been perfect, but hey). I would run another RnR marathon with split courses anytime!

I'm happy with my time and my place in the standings. Not bad for 61. As usual, I did pretty even splits. (Why I do so well vs the young'uns)

Note: My Garmin watch only registered 26.15 for the race. There is no way I unintentionally cut the course..it was super clearly marked.  But as I said I ran the tangents really well, so I wonder if the course was measured assuming people stayed in the same place in the lanes. (Which is not normal..regulations say tangents are a must). I don't know but it certainly saved me 2 minutes or so.  I have a sneaking suspicion that the course is a tad short.

But all's fair in love and war (and marathoning)! 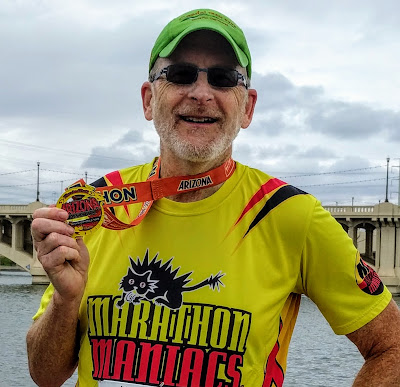