Friday: After some delays at SFO due to air traffic problems around ORD (due to the vandalism in the control tower recently) we arrived in Chicago to sunny weather.

We stayed in the Hilton...pricey but right at the center of everything.

Saturday: Off to the Expo a bit late but before it got too crowded. The shuttle from the Hilton had a huge line so we just cabbed it.

The packet pick-up was amazing: You had a QR code on your race booklet they had mailed you via both US post and email (pdf). There were lines that took you very speedily to people that scanned your code, looked at your ID (US license or a passport) and then told you which of about 50 tables to head to. 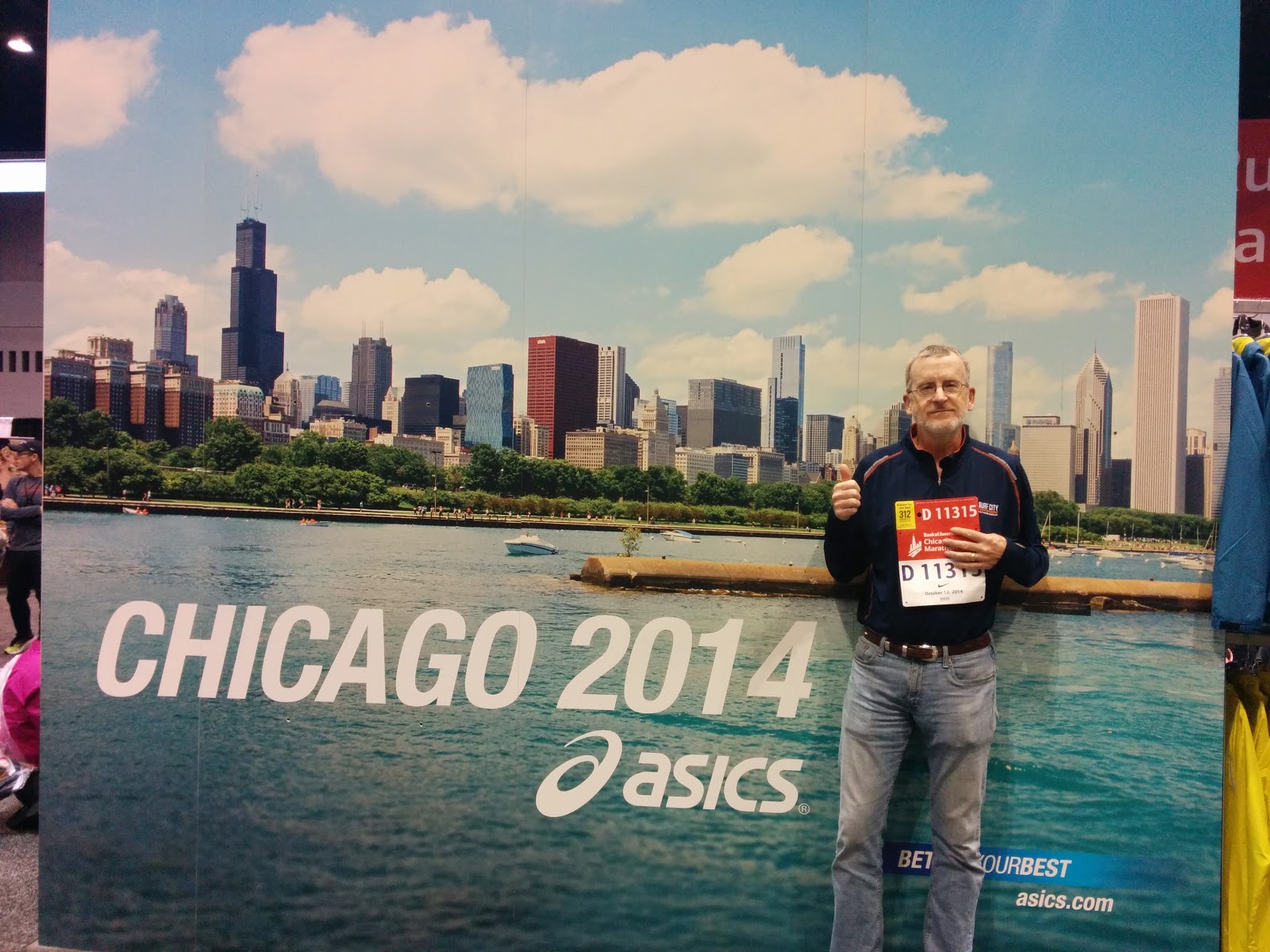 As I walked to table 47, the person said "You must be Paul" as she had a display showing the people that had been guided to her table...and I was the next. Amazing.  She gave me my bib packet (which she had already fished out when I was walking over) and pointed me to the T-shirt pickup. (Which as usual required running the gauntlet of all the expo booths).


The T-shirt is pretty good, IMHO. Toni didn't like it but Iiked the dark grey-black color as these shirts don't look yucky after a year or two of use like white ones do 8). Of course, Bank of America gets huge billing on the shirt but the bold white letter are pretty striking and the date 10-12-14 is nice.

My only other goal at the Expo was to see my hero (and I don't have many): Hal Higdon.
If you read my first marathon report you'll know I used his training plan and I read his book about 1 zillion times. I especially read his recommendation on first marathon pacing and that stood me well. So I went to his booth to get a pic with him. He also autographed my bib and his signature survived the sweating to come ;)

After the Expo Toni and I went up to the Art Institute to see the new wing. Pretty nice. I ended up walking around and being on my feet for about 6 hours that day, not the greatest idea but I refused to worry about it.

Had a great Italian dinner at a restaurant called "Sofi" that was close to the hotel and spoke with a few other runners there. One, named Mark was from near Shreveport, LA and it was his first marathon. On race day he passed me and recognized me (probably because of my Marathon Maniacs shirt) and was on a path to a 9:35 m/m finish!

As you may know, I injured my PF in my right foot acutely about 10 weeks before race day. It took me a while to figure out that I needed to be doing a lot of stretching and foot rolling to break up the scar tissue in my foot. I also switched to much softer shoes (Hoka ones and brooks Pure flows) and used gel heel lifts to reduce the stress.

I slowed way down to 11 m/m paces in my (sparse) training and took it easy. I did not want to miss race day!  On runs I was not hurting but my foot did ache a bit...my form not too messed up but I had no idea if I would pull another muscle after 15+ miles. So it was a bit of a crap shoot. My plan was to stick to a 5 hr goal with around 11m/m (4:50 finish) pace that would allow for some walk /stretching time.


I was seeded in corral D because of my Eugene 2012 3:55 time which was nice (but it meant that people were passing me in droves the entire race until mile 20 or so.

Here I am in the corral: it looks much lighter that it was at that time. The weather was perfect: 48F at the start. There were no clouds which meant it might warm up a bit much but it made for a beautiful Chicago to be seen!

I used my Garmin 620 so Toni could see a 'Livetrack' of where I was. I am not happy about the GPS reception in this watch compared to my 610, but this course has accurate 1 mile markers with clocks so all I really needed was the stopwatch. 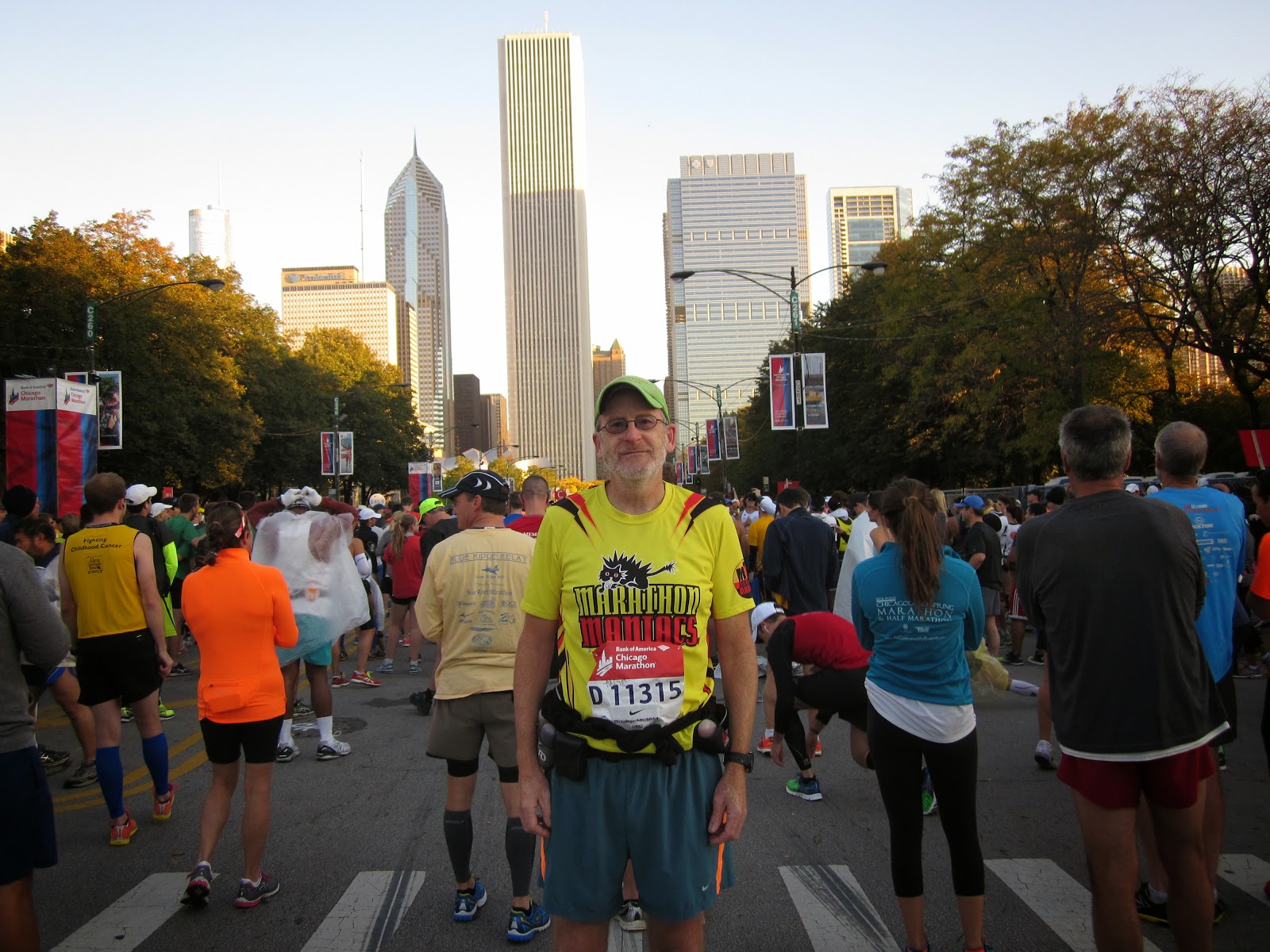 This next shot is after the start...you can see how crazy crowded it was! The sun is up
and we are headed out! 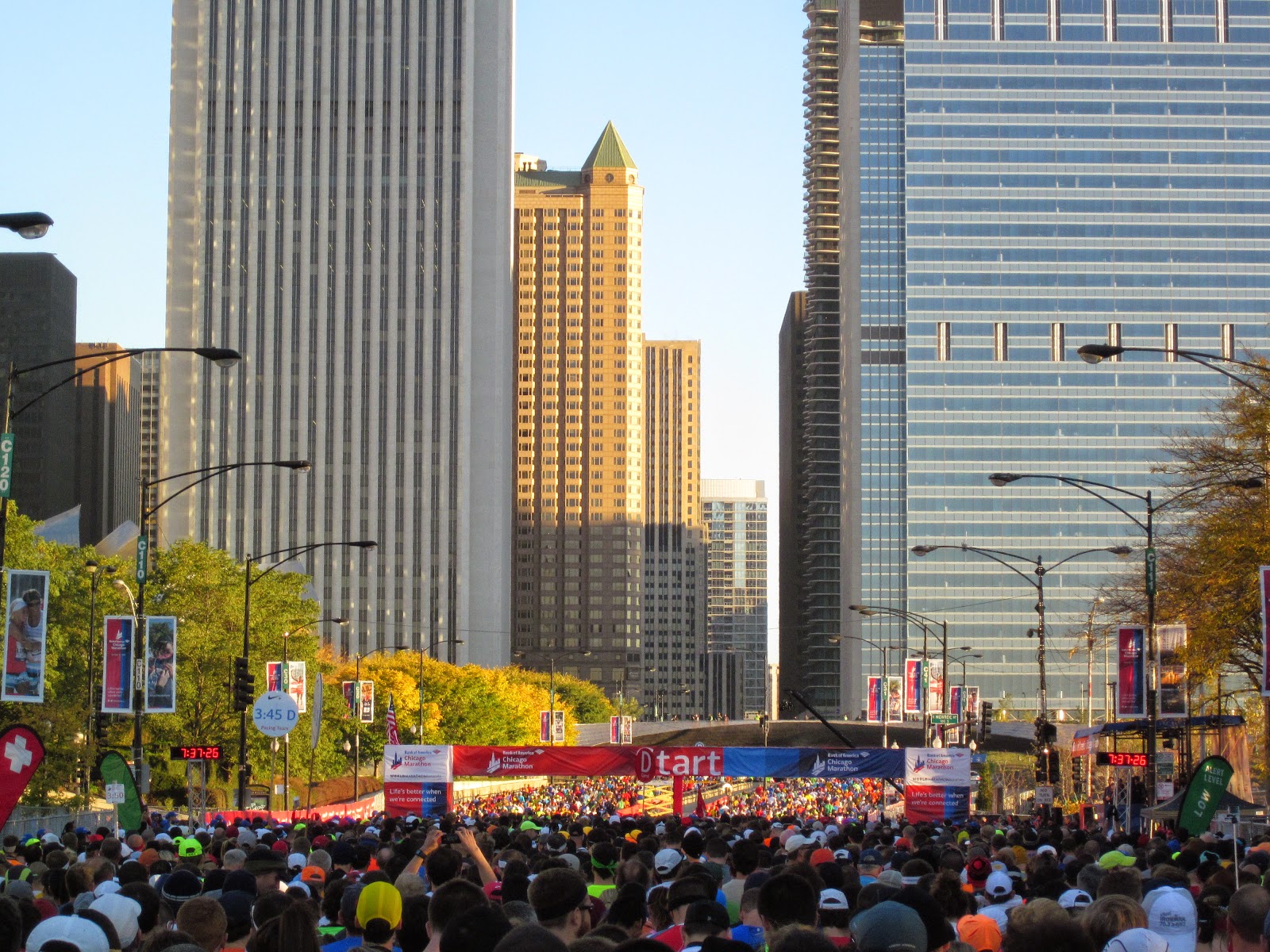 Now you can see the crowed are thinning out. Unlike Berlin, Chicago has wider streets throughout the entire race so no "choke points" to slow you down. I did not have to jink around anybody (because I was going so slow) but people didn't really have to jink around me either.

The crowds were already lined up in the first few miles! My goodness. Only a taste of things to come.  I was going out a bit fast with a pace in the tens and after a few miles had to really tell myself to stop that and slow the F down. 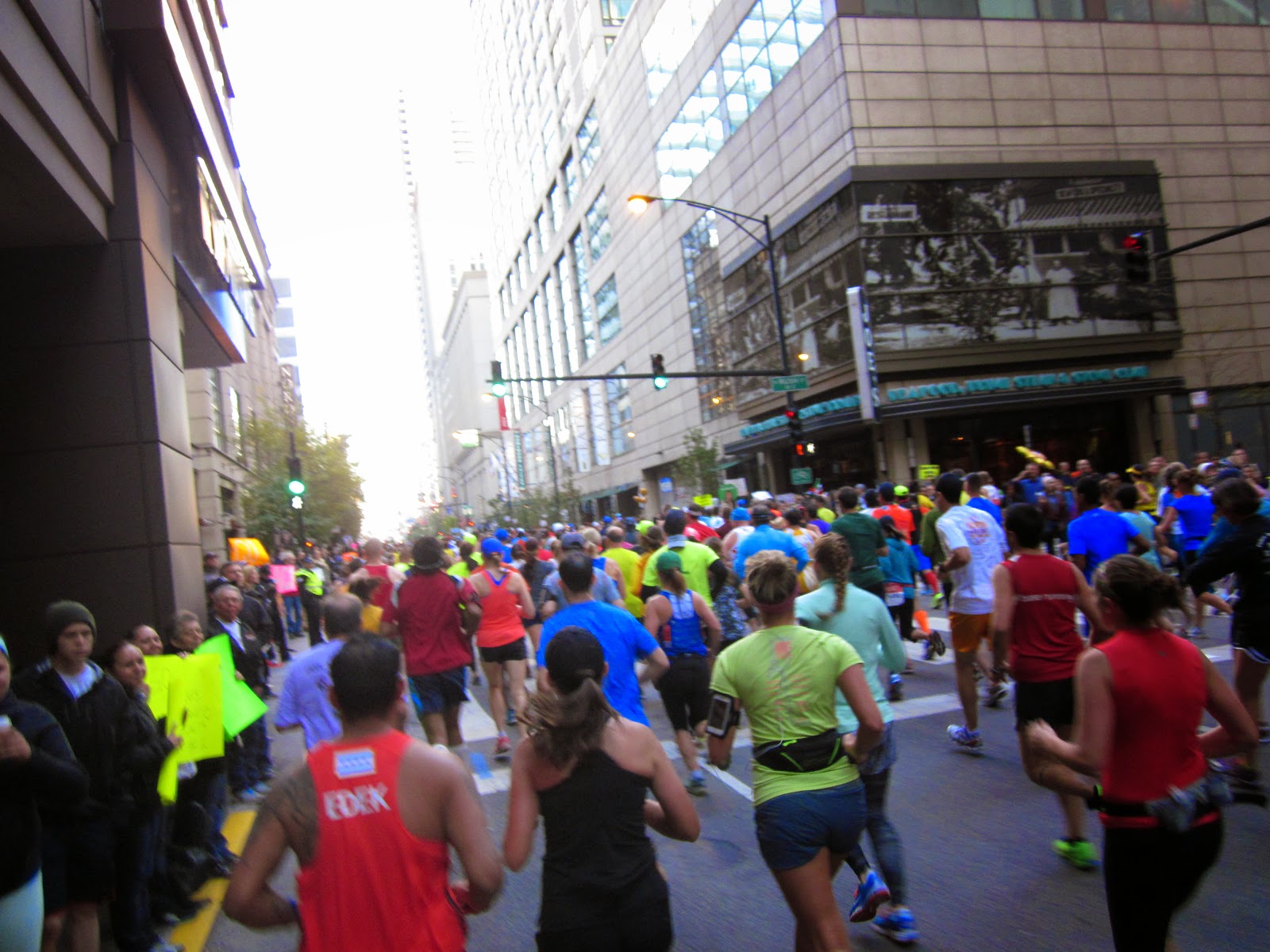 I heard a funny noise behind me and this guy came by: he was dribbling two basketballs and running about a 10m/m pace. Amazing. He is "DoctorDribble.com" 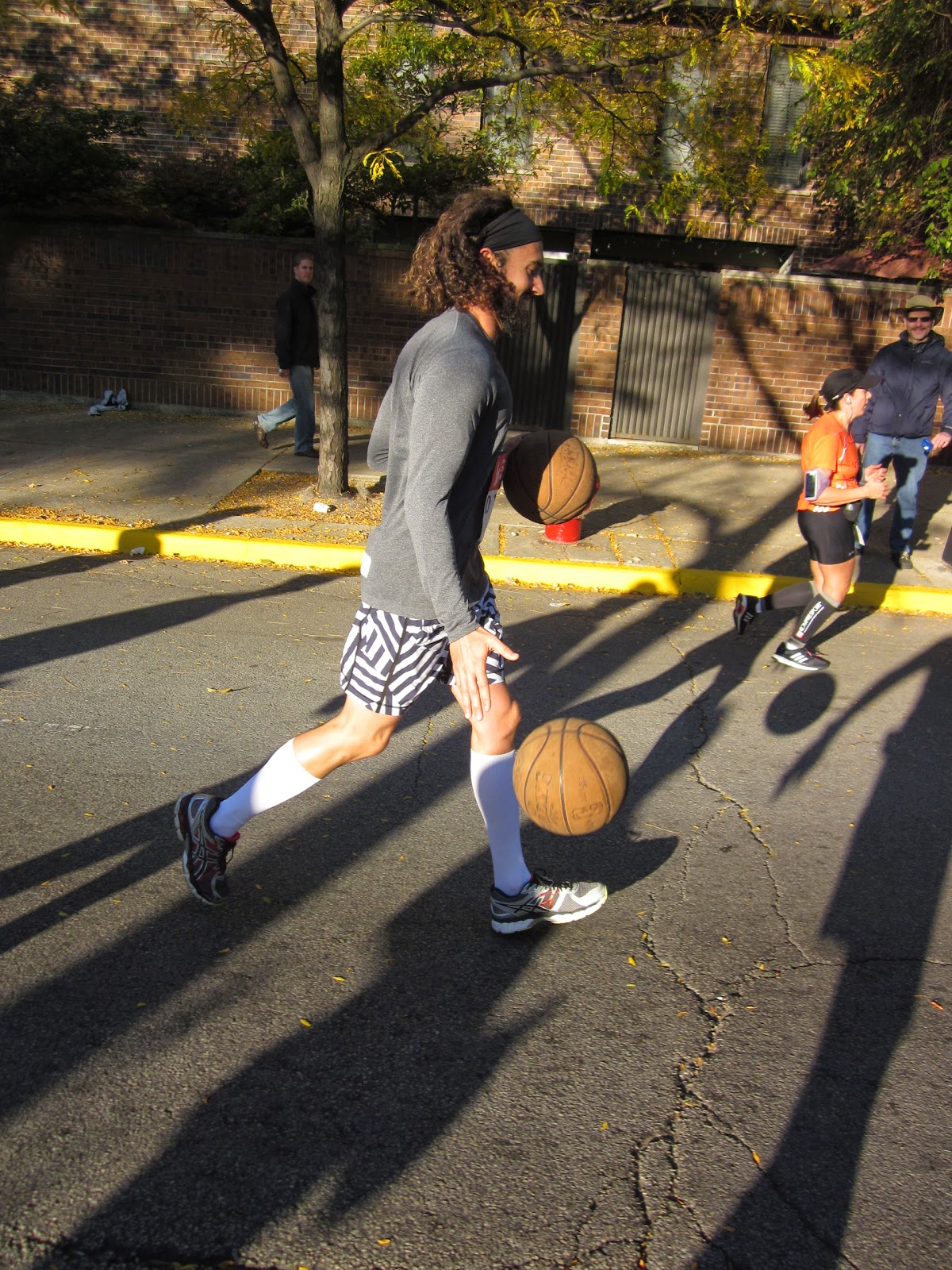 We are headed north up at about mile 5 and reach Lincoln Park, where my sister in law used to live. Lots of nice trees up there. 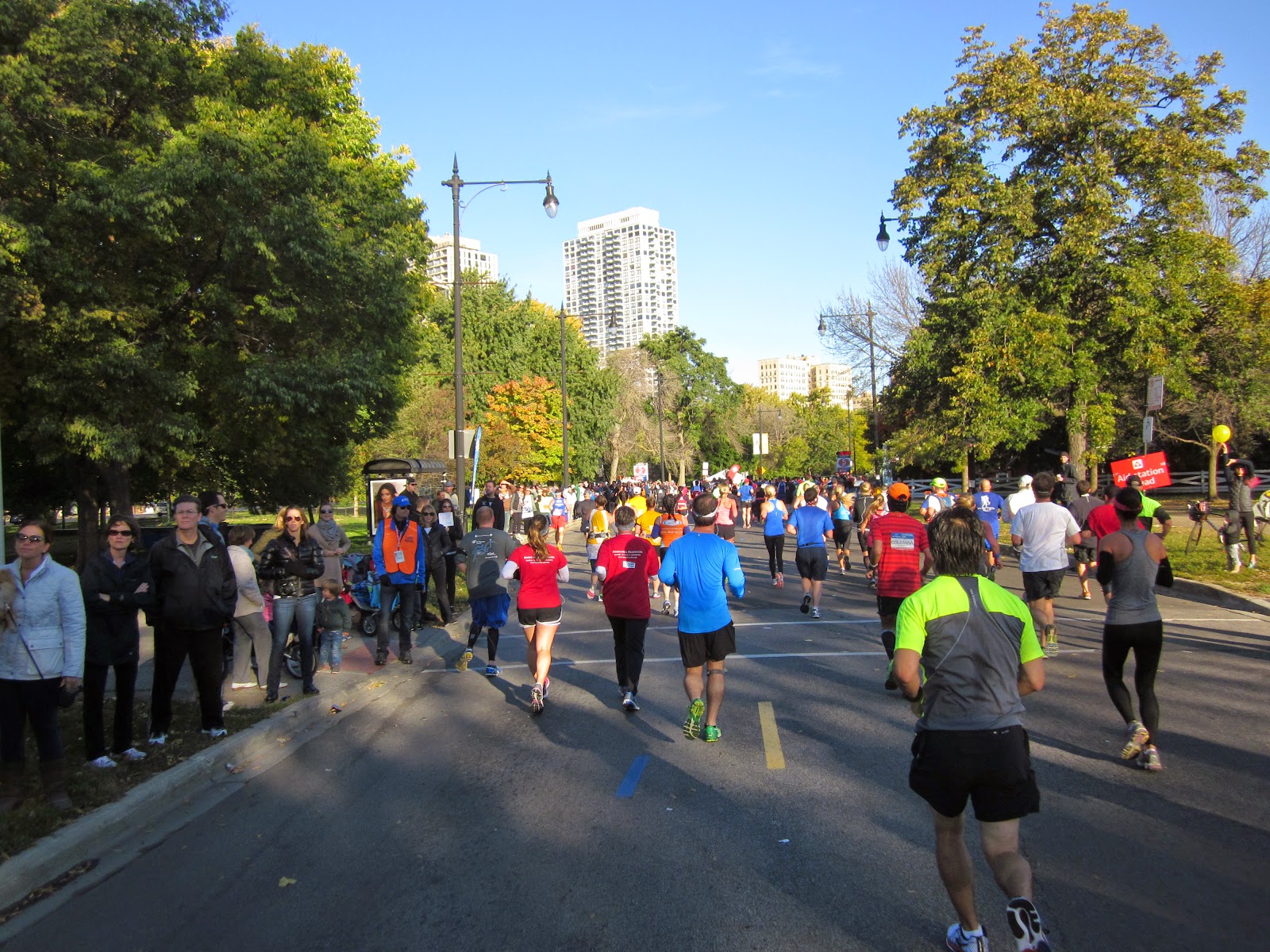 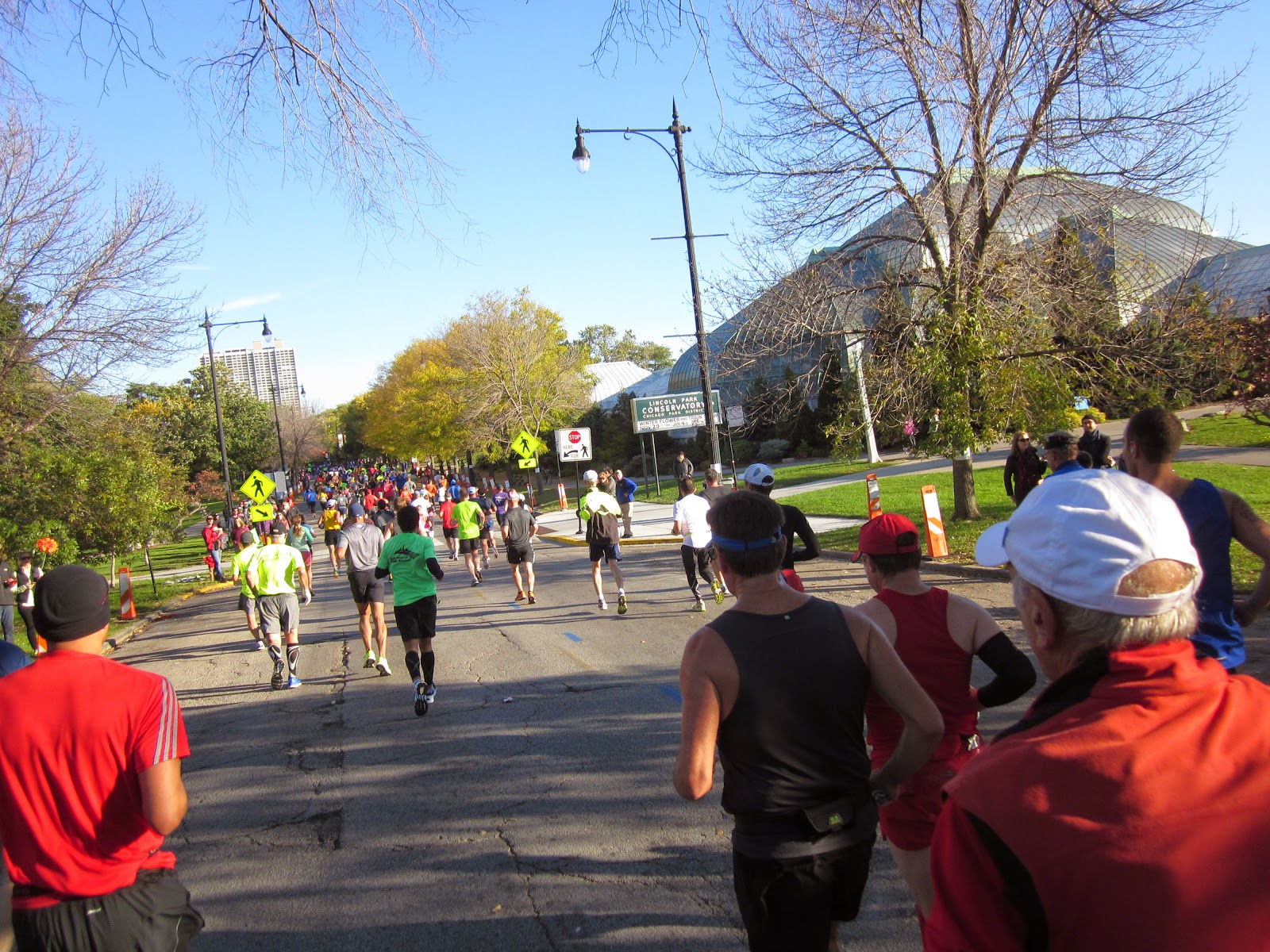 At about mile 7 we have turned around and are headed back to town. You could spot the former Sears (now Willis) tower. 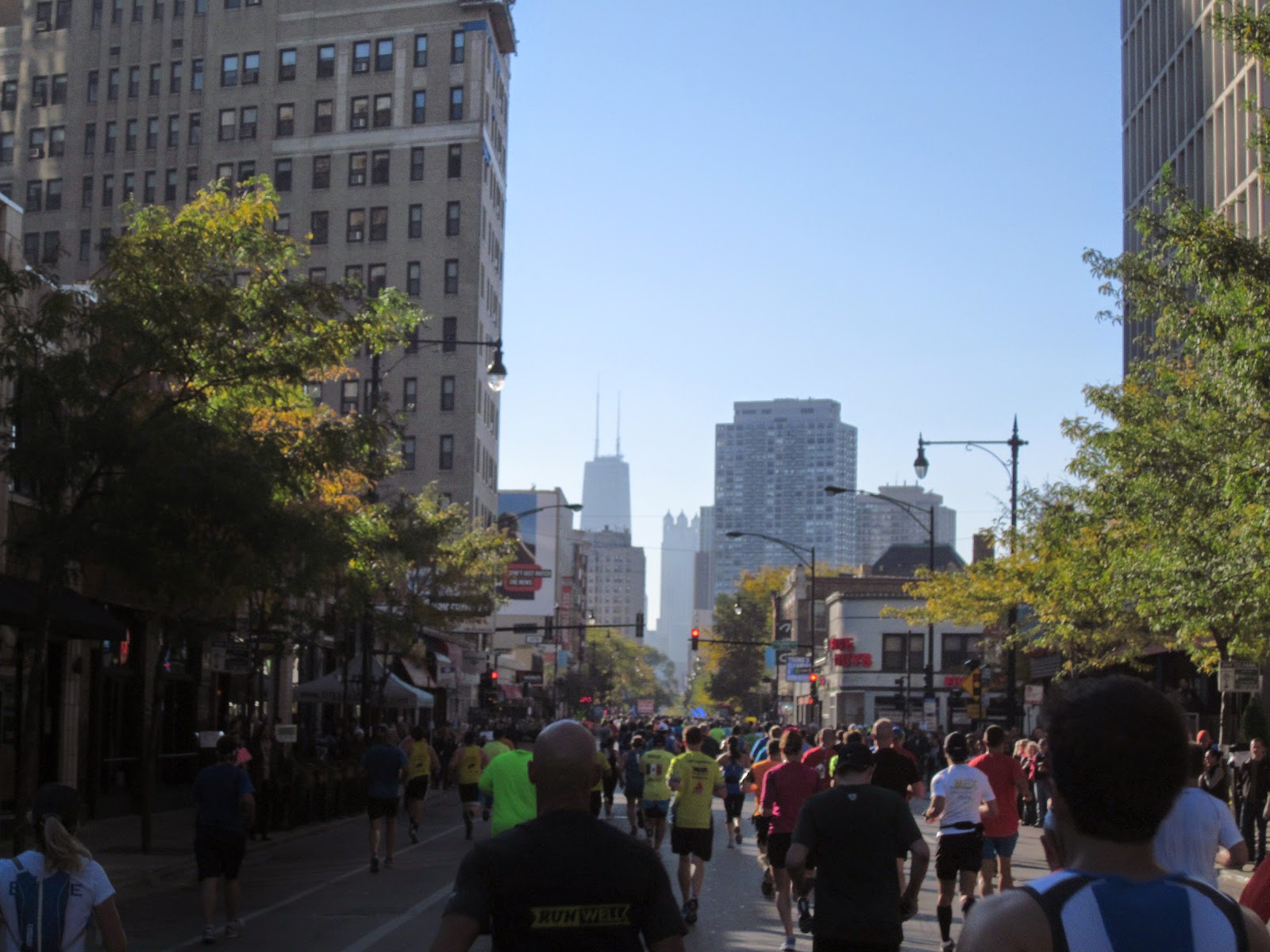 Unlike downtown NYC Chicago has a lot more interesting areas where things are not a pure grid: because of the rivers that cut through town with zillions of bridges. Chicago is also a lot cleaner city than NYC in my opinion. (I love both cities, btw).

As I approached the half marathon point, I was looking for Toni and didn't find her. As it turned out the 620 livetrack wasn't working well at all. (I was seeing goofy stuff on the watch due to the poor reception in the skyscrapers and she saw my track all over the place. The livetrack also spontaneously reset so my elapsed time she saw was goofy) 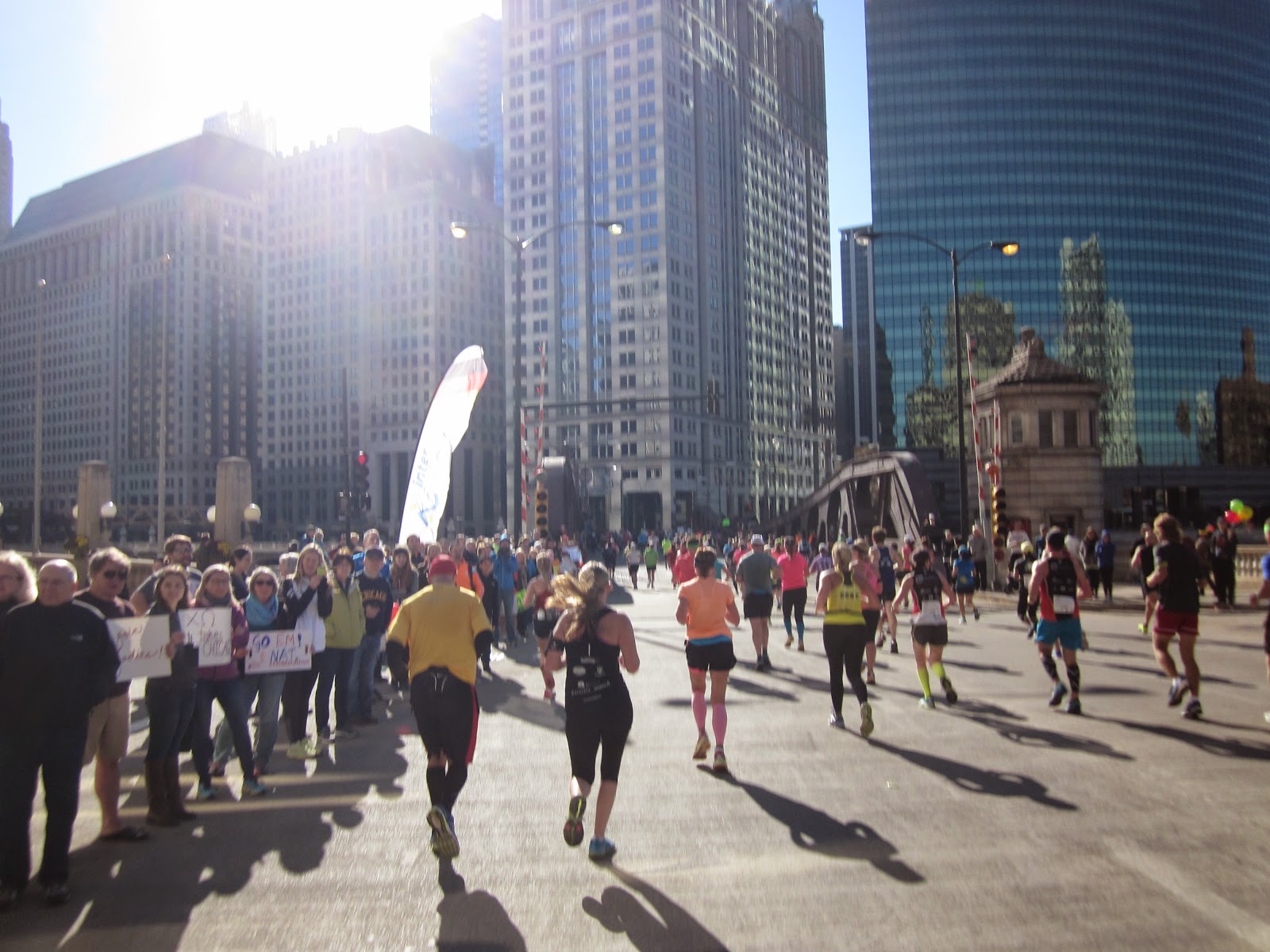 The crowds were amazing. Some places just pushed you along with a wall of cheering. If you had your name on your bib (I didnt) they called out to you. I was wearing my maniac shirt and got shot outs for that all the time.

Even though it was sunny, there were trees providing shade, and of course a lot of tall buildings also, so the temps were good. 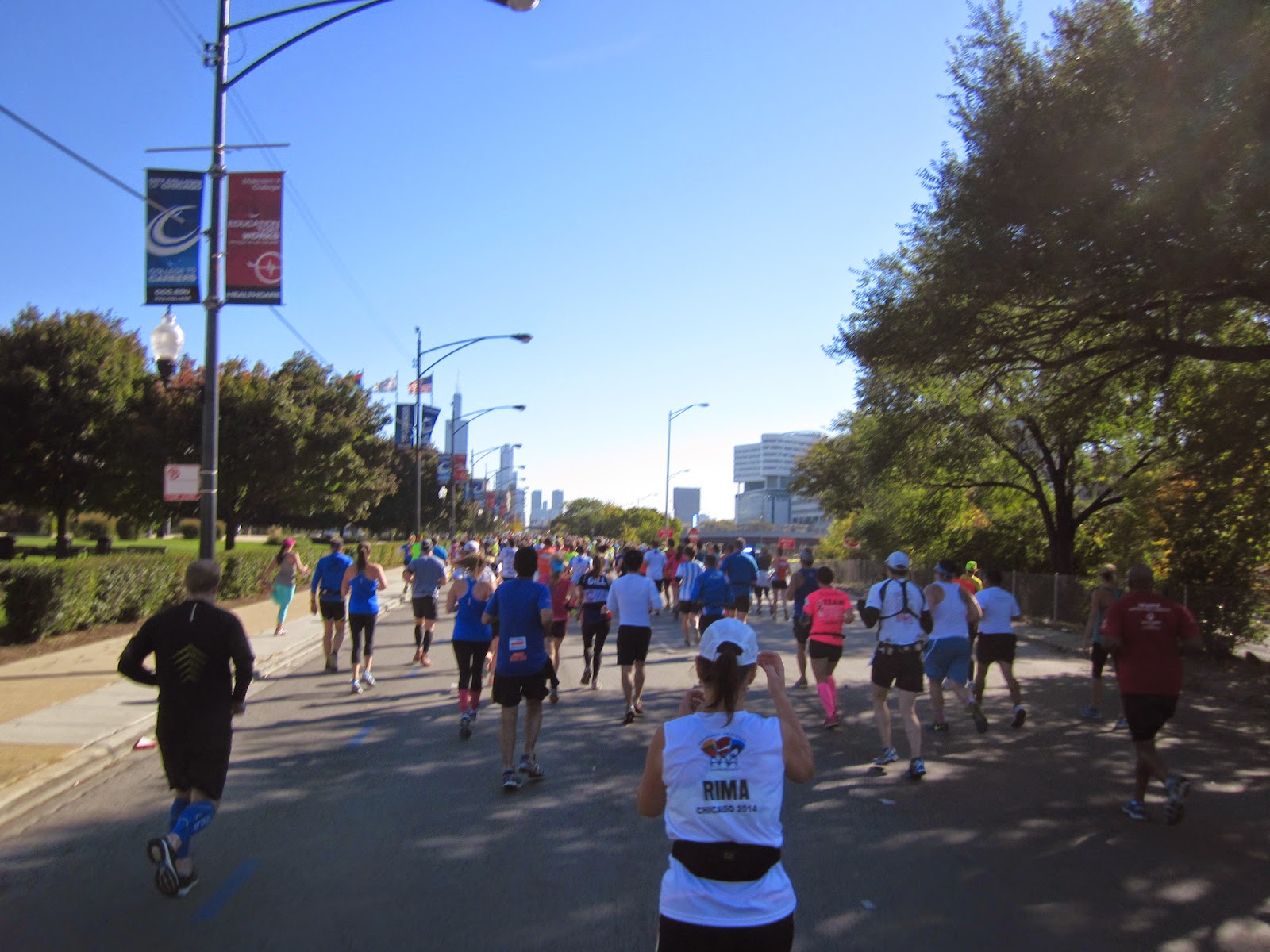 Heading back into the city again after going out to the west. 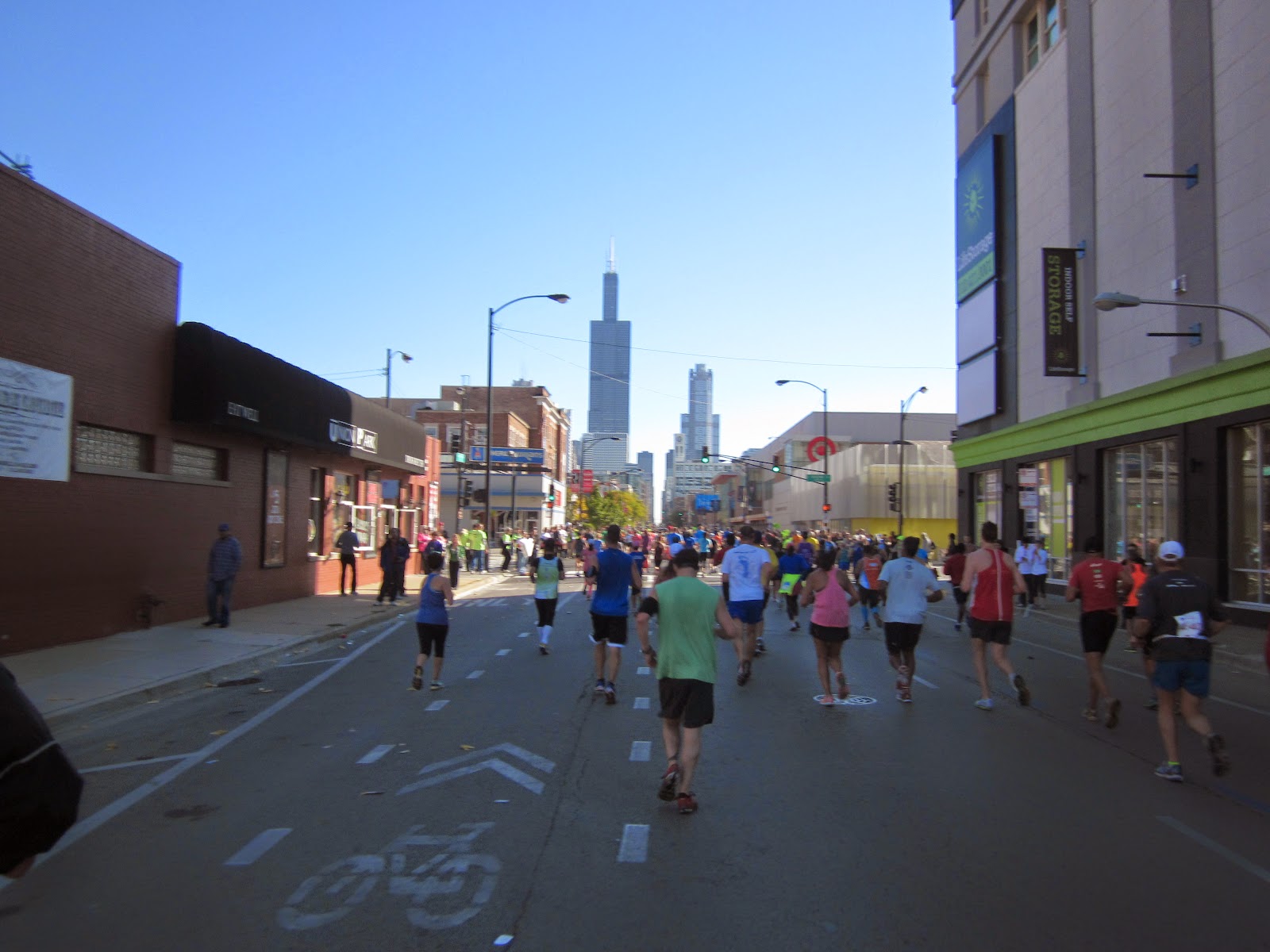 Toni hadn't been able to find me yet and so at some point around mile 16 I texted her "@ mile 16 and all well" so she would know my foot was ok and I was still cruising along. 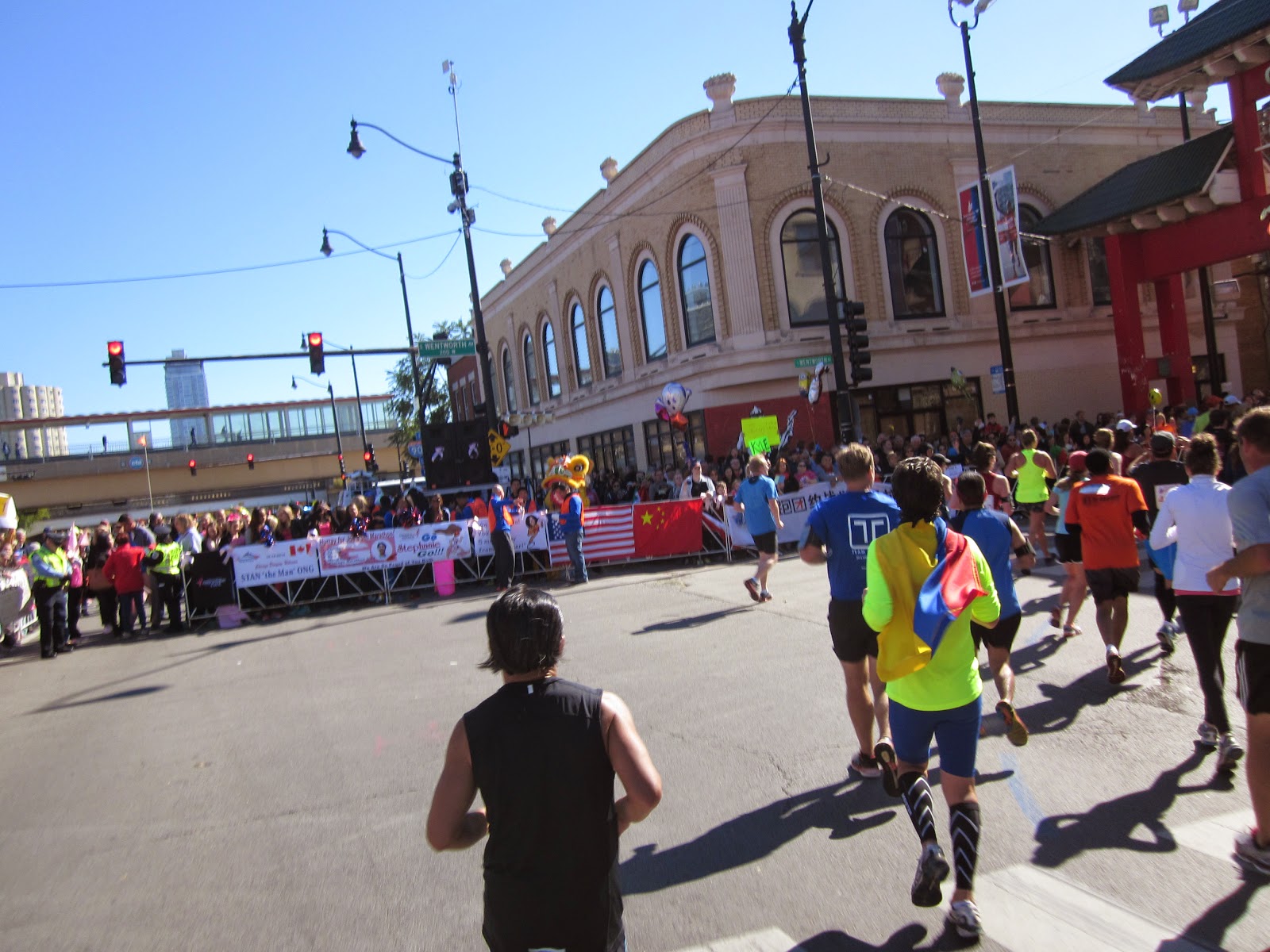 Heading into Chinatown...the last 6 miles or so I think. There were 20 aid stations on this course and each one was a full two blocks long and all laid out the same: sports drink for the first block on BOTH sides of the street, water on the second block.

I started only taking water every other water stop after about the half and I was decently hydrated after the finish. 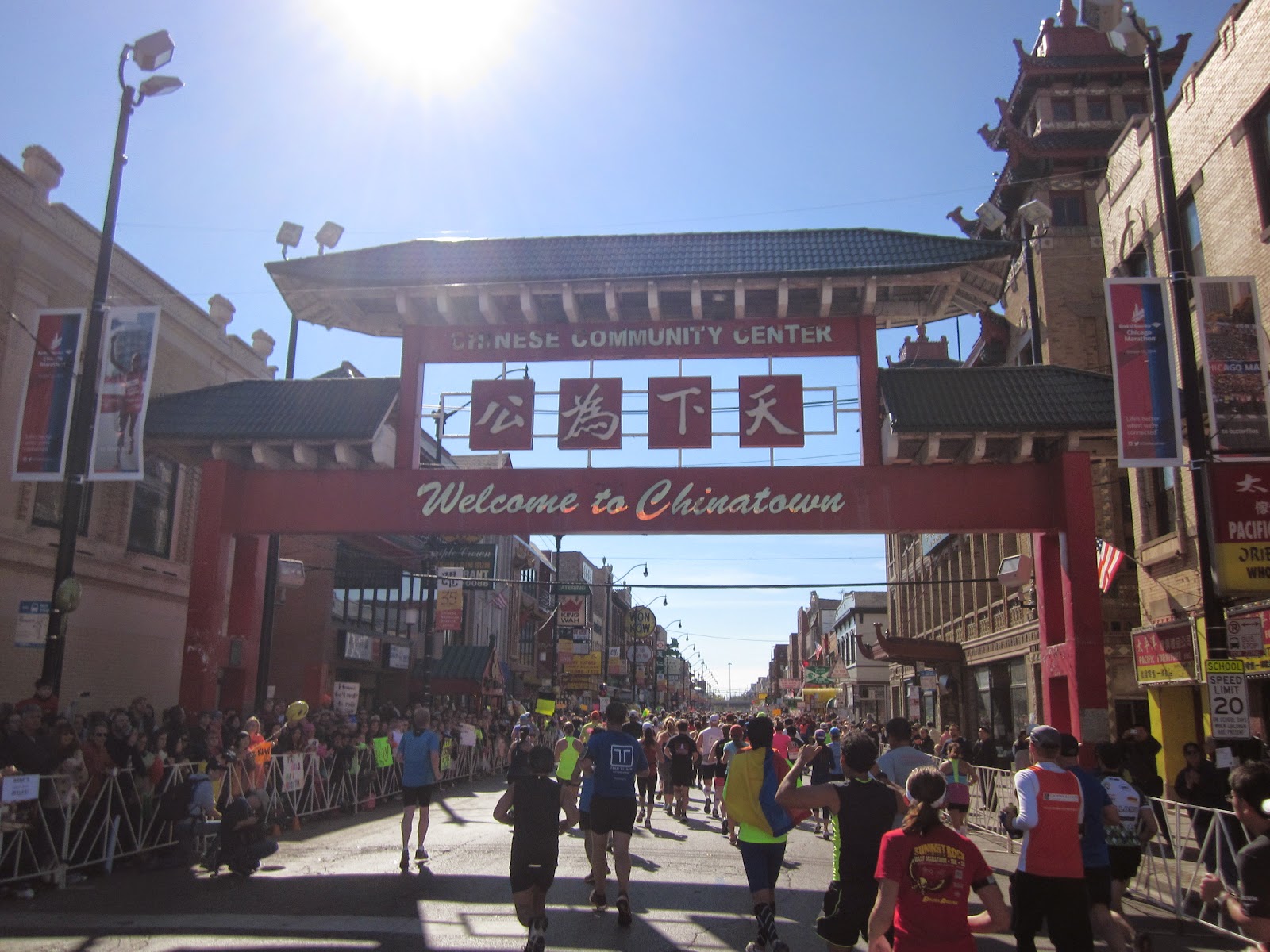 This was my first race taking gels via small gel flasks with Hammer gel rather than GU packets. (I had been using them in training of course). This worked out really well. I could take a small sip of gel every mile or so and my stomach was much happier than a whole packet at a time after 45min. I finished the race having taking the equivalent of about 10 GUs..my previous max consumption  was about 6.

At the Expo Scott Jurek was telling people that 6 GUs per race (one every 45 min) was NOT enough...which agrees with the recent research I have read.


As we headed back north to the finish, the sun was behind us and so the shadows of the buildings didn't help (you can see this below) so it was getting a bit warmer but still not too bad. Glad to be on the home stretch.


As I ran through mile 23 or so, I heard my wife call out my name (which was a miracle given all the crowd noise) and I crossed over to meet her. It was great to see her and I was able to get rid of my jacket that I had spun up and tied around my waist!

She texted with my friend Mark, he was at the convention center (yes same as Expo) but at a medical convention doing presentations there. He was off for lunch and asked her if I was finished with the race. She told him I had just gone by so he wandered out and suddenly jumped in when he saw me.


Hilarious to see him running in his suit!

Soon after I saw the dribbling guy again.


On the approach to the right turn on Roosevelt street the crowds were 6 deep on each side and yelling like mad. I speed up just a little bit as I was actually feeling decent (considering) and was happy to have my foot holding up and my pacing being a success and of course, the finish being so near! The crowd responded to this in a way that was crazy. I was tempted to hold that pace up Roosevelt (a 50' rise just 400m from the finish) but I knew my heart rate was already probably pretty high and pushing the same pace up the hill would be dumb.

The sides of this rise had a bunch of race staff cheering us on, and I noticed they all had "EMT" signs on them. They were taking long hard looks at each runner in the eye as I went up the course...they knew this was the place where a lot of people might over do it. I've never seen that at a finish.

I read that 25 people got taken to the hospital. 2 got CPR. I hope they get better. I'm sure the marathon did a great job tending to them.

Best run race (especially considering the size) I have seen so far..thousands of volunteers
of all ages and all very well organized.
Best crowd support (OMG! 1.7 Million spectators)
Super weather this year.
Lots of people from all over the world.
Chicago a great city as always, course is varied and fun.
I would do it again for sure! 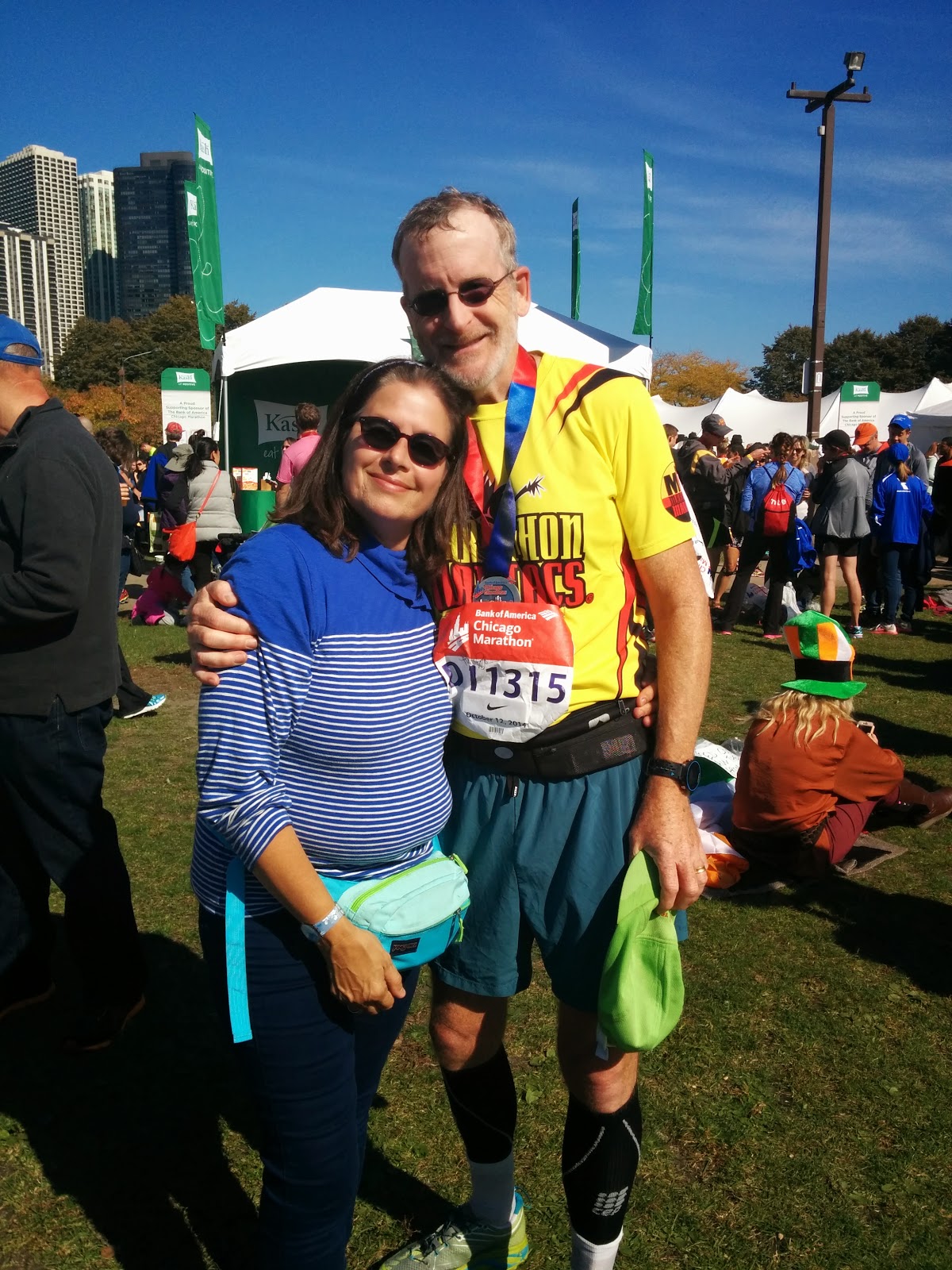 
Today is "DOMS day" (Tuesday) and my foot feels really great. I think the 26.2 at a slow pace has actually "tenderized" all the scar tissue in there. It actually feels better than before the marathon. Yay!
On to Indianapolis in 2 weeks! 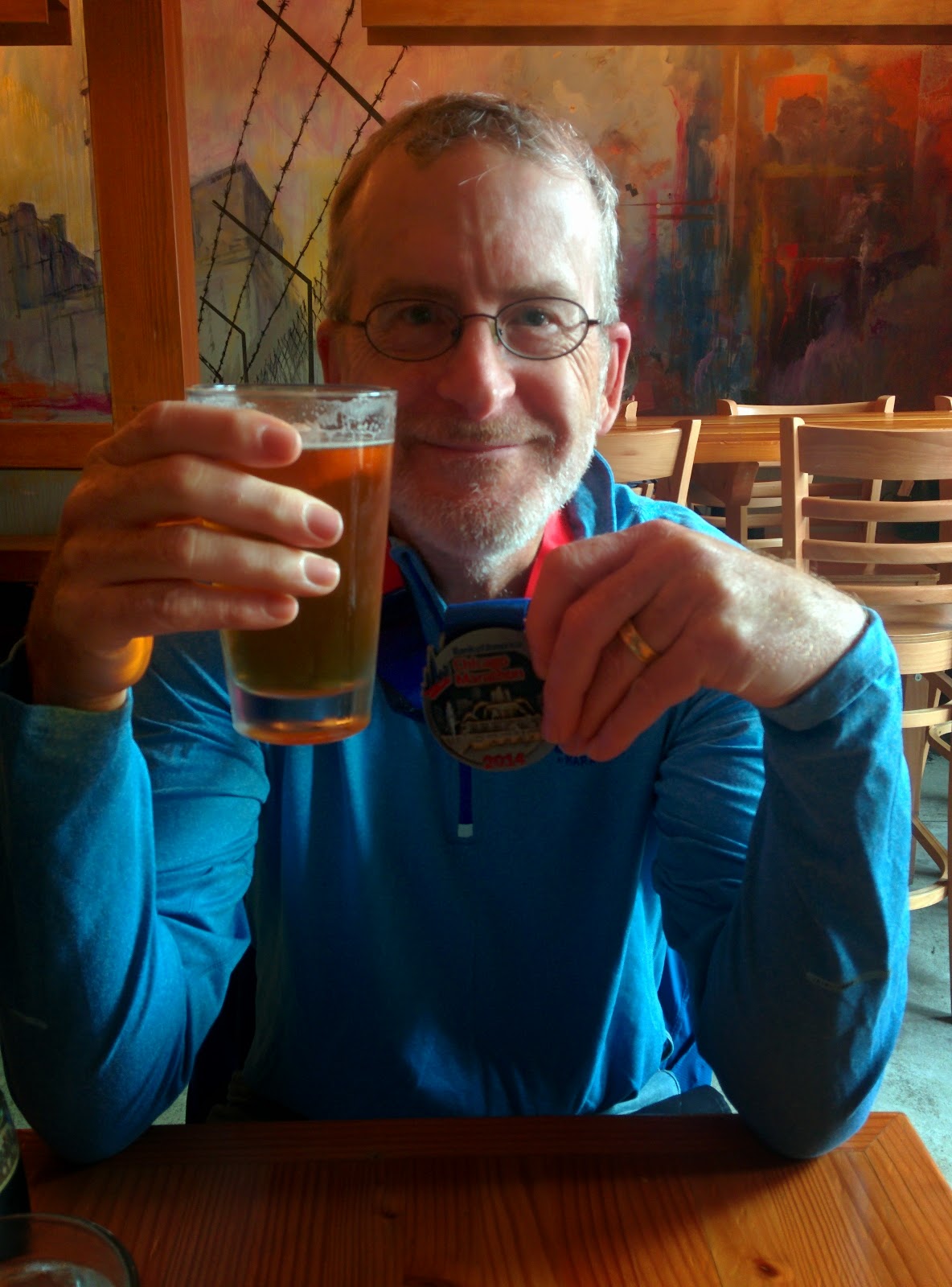