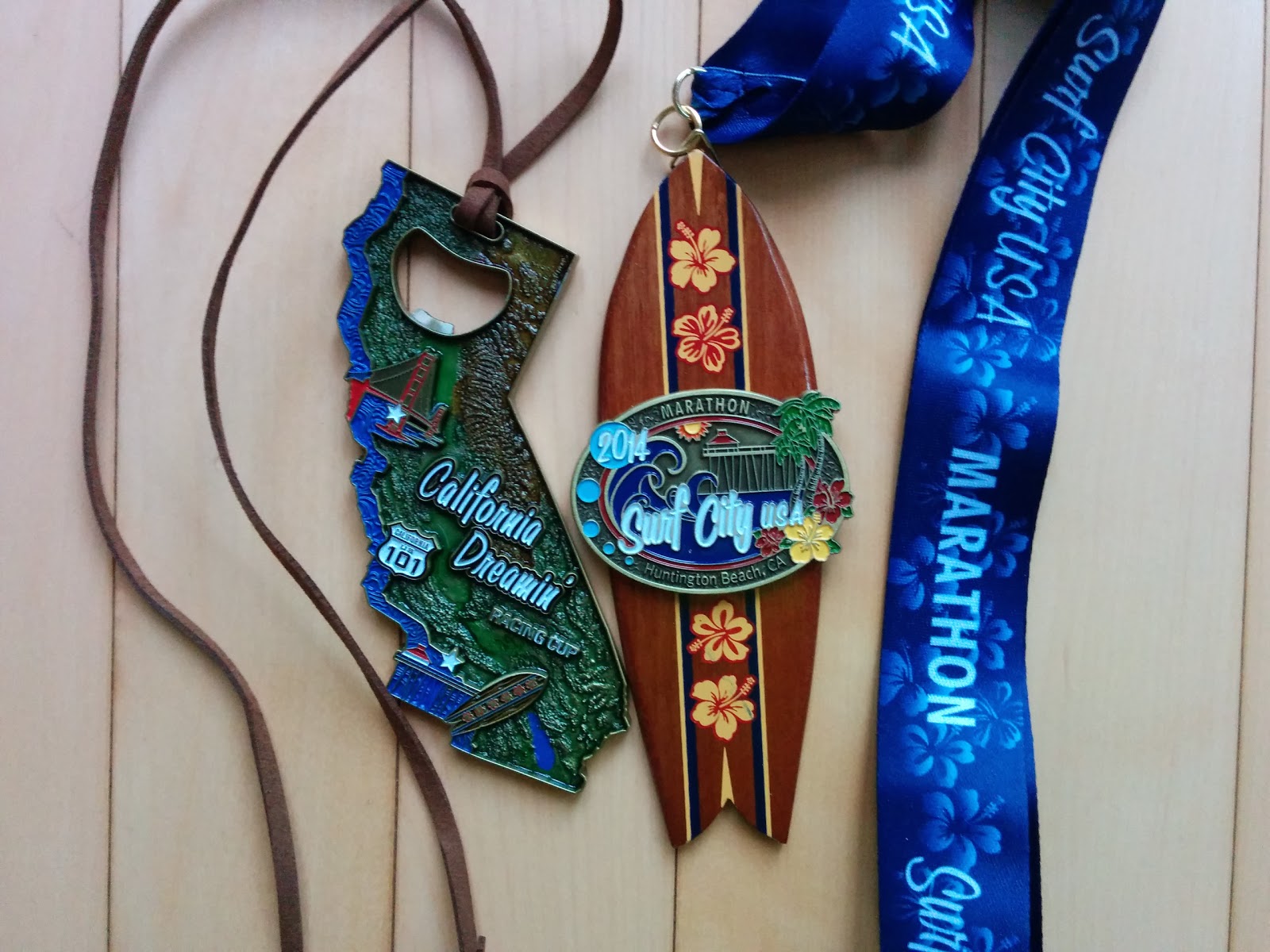 Back in mid-November I started looking for a hotel room....a bit late in the game...they were all full. Not only that, I forgot that they all require a 2 night stay there.

I'm only a one hour flight away, so I just wanted to fly in, sleep, run the race and fly out.

As I was pondering this, Toni suggested I try AirBnB. This is social networking sight that lets people rent out rooms or whole apartments to people.

I checked it out and found a little beach bungalow that was only 10 minutes walk from the Expo and start/finish on 2nd street. I got an AirBnB account and made an offer for my dates which was accepted by the host. A week before arrival, he sent me the info on how I find his place and get in. 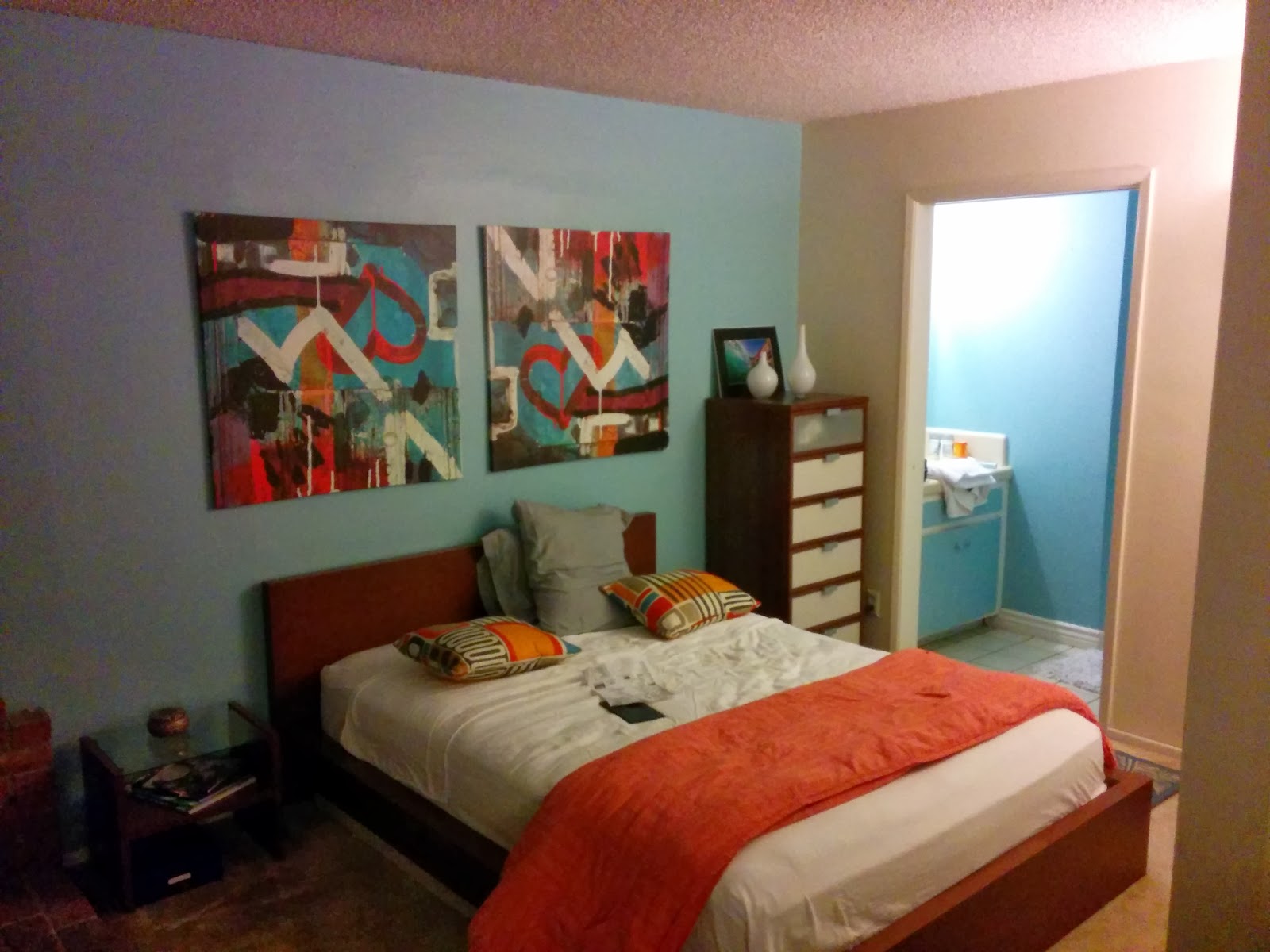 I have to say that this worked out really really well...when I arrived via taxi I dropped my bag off there. (see photo of bed area) and then went off to the Expo. I slept like a rock the night before, going to bed at 8:30pm and sleeping  8 hours no problem ;)

But I get ahead of myself. At the Expo I picked up my bib and shirt. See "selfie" below. 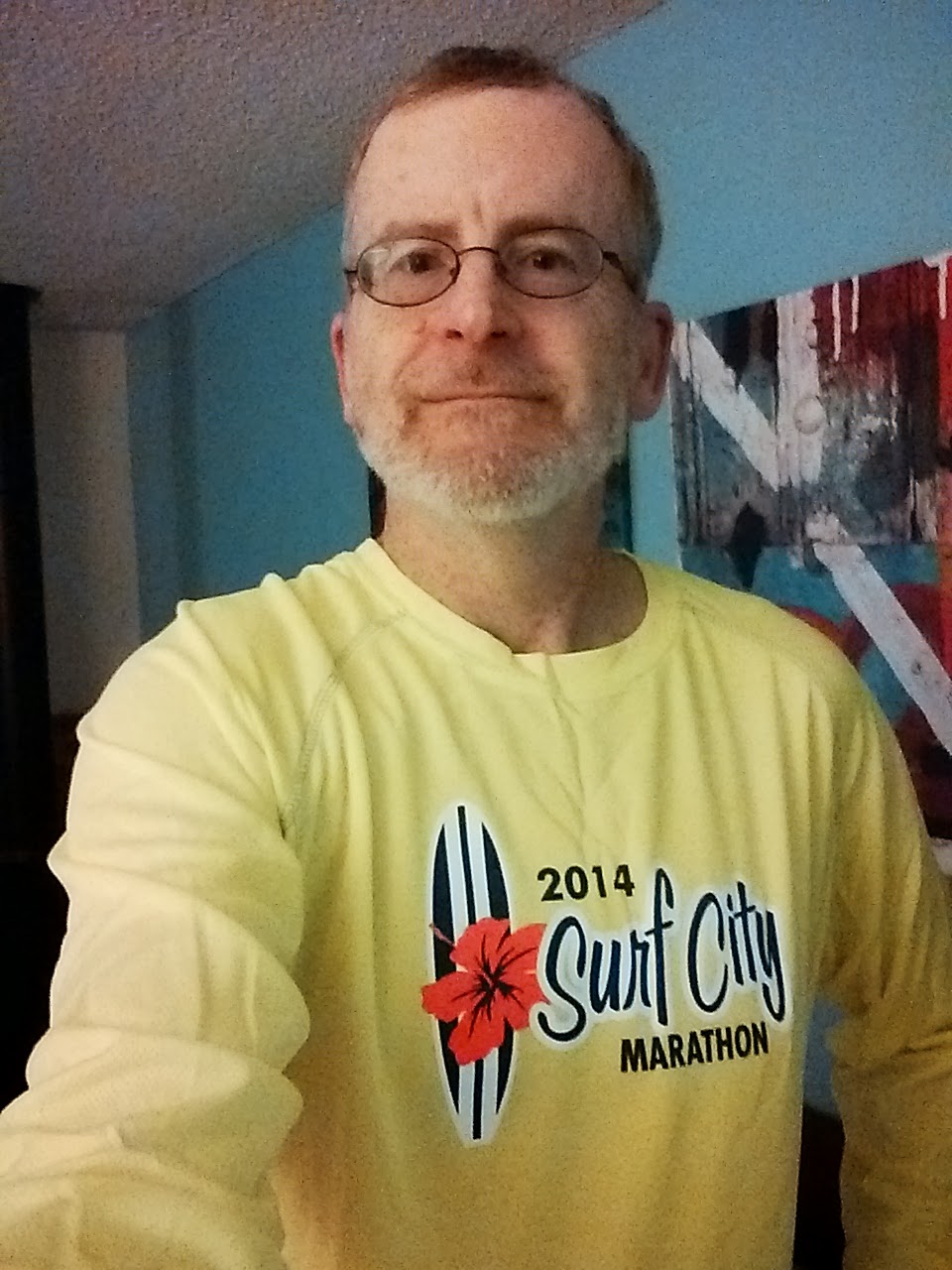 They always do nice shirts at SC as well as nice medals. (it's actually a much brighter yellow/green than the photo)

Check out the lacquered wood for the surf board medal too. Very nice.

I met up with Arthur and his brother, Edwin and we hung out and the expo and then went to have some smoothies on the beach. There was a nice bright blue sky but cool temps (good) and quite a spanking breeze. It was late afternoon so I didn't think much about the breeze. 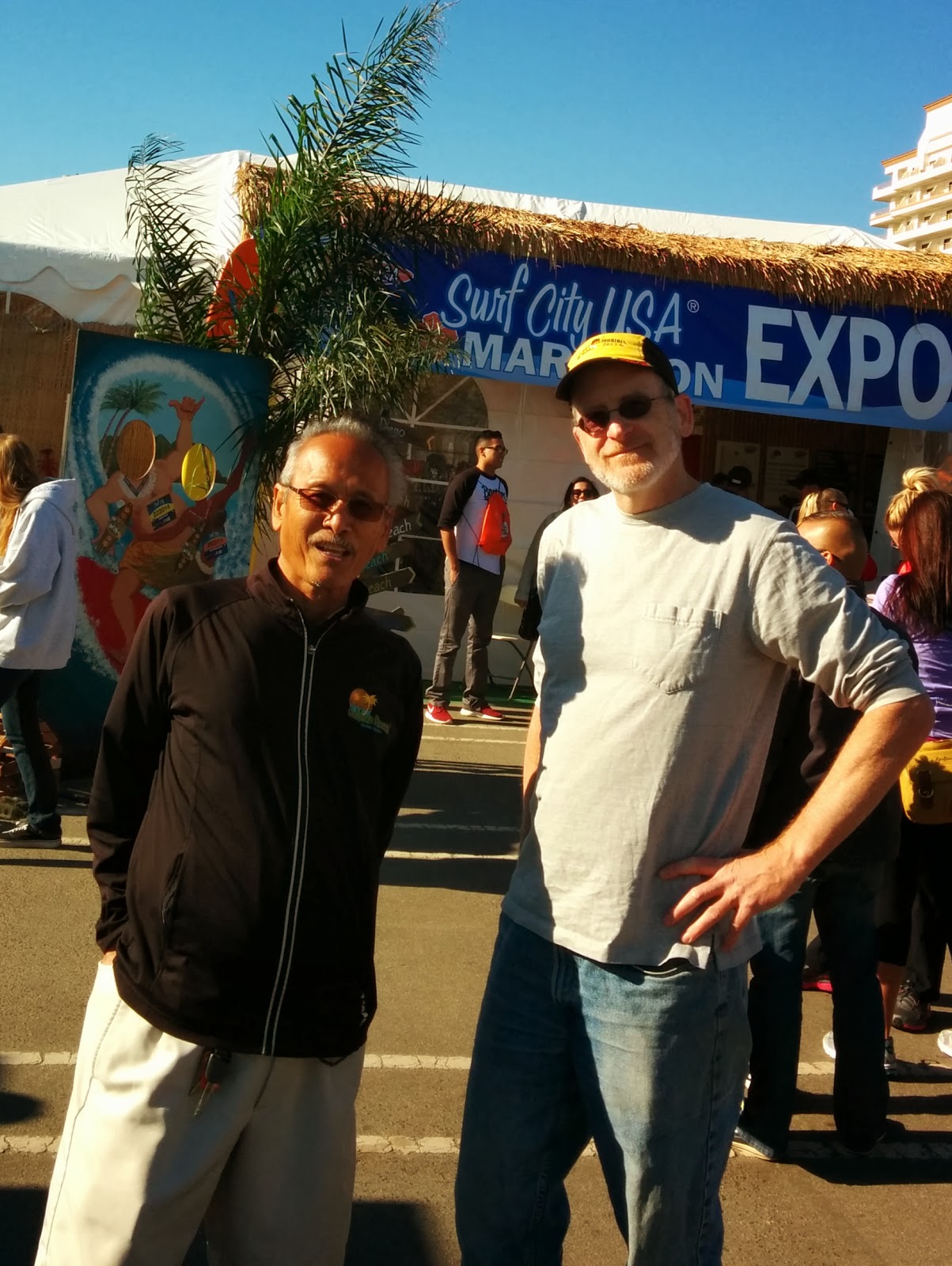 Next morning I left the bungalow at about 40 minutes to start time (6:30am) in the dark. It was 41F so I had a throwaway T-shirt as well as a stylish garbage bag to keep off any wind.

There was almost nobody standing in the corrals when I got there but soon enough I filled up. The sun was just coming up behind us...lighting up the clouds above a bright red. (Sorry, phone was packet away so no photo).

After the wheelchairs and elites our turn next! We set off  and I settled into a nice pace. I noticed the PCH (pacific coast highway) was newly paved and nice and soft asphalt. The full width of the road (two lates plus shoulder) made it easy to find a space so no crowding after the first 200 yds or so.

Eventually we leave the PCH and head up toward the park at miles 4,5 is the one hill we go over twice. I slowed up for the uphill (9:01) and then rocked the downhill (8:20!) Oops. maybe too fast.

In the park you run on small paths but it's not crowded..we're all pretty spread out. I had no trouble running the tangents here and you can see below this race totalled up 26.3 miles for me which is the shortest marathon I've done so far. 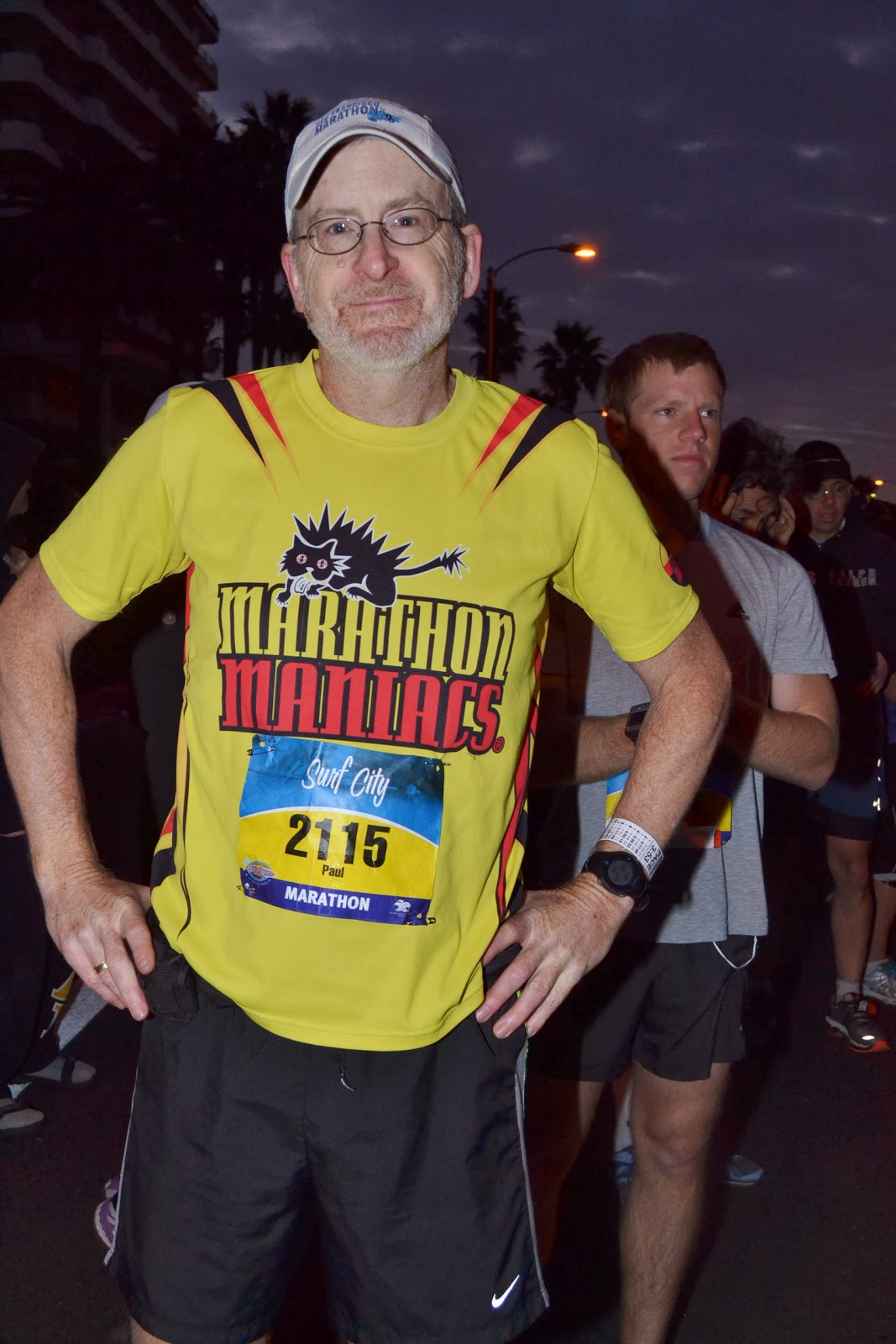 The water stops where plentiful and well staffed by the armies of school kids that volunteer at this race each year. They came by crazy often if you wanted them. I was using most of them because I found I could slip in, do the pinch, suck down a bit and throw the cup and not lose any time. In fact at one water stop I picked up a second.

There was the usual California Surf bands playing out on the course and this is one of my favorites so I enjoyed that too.

As we go back down to the PCH we are over the next hill (miles 9-11), not much too it and then down to PCH. Now we settle into the meat of the race. We go back and forth on the PCH and then do the same on the beach boardwalk. Some people complain it's too boring and flat. Hmpf. I find the ocean and surf plenty pleasing to look at and you can see there are some gentle rollers in the road if you look at the elevation data.

Along here a young guy struck up a conversation with me that went on for about 5 miles. This caused me to drop to 8:55 pace or so but I didn't worry about it...actually that turned out to probably help me from crashing earlier. Eventually he surged on ahead of me. 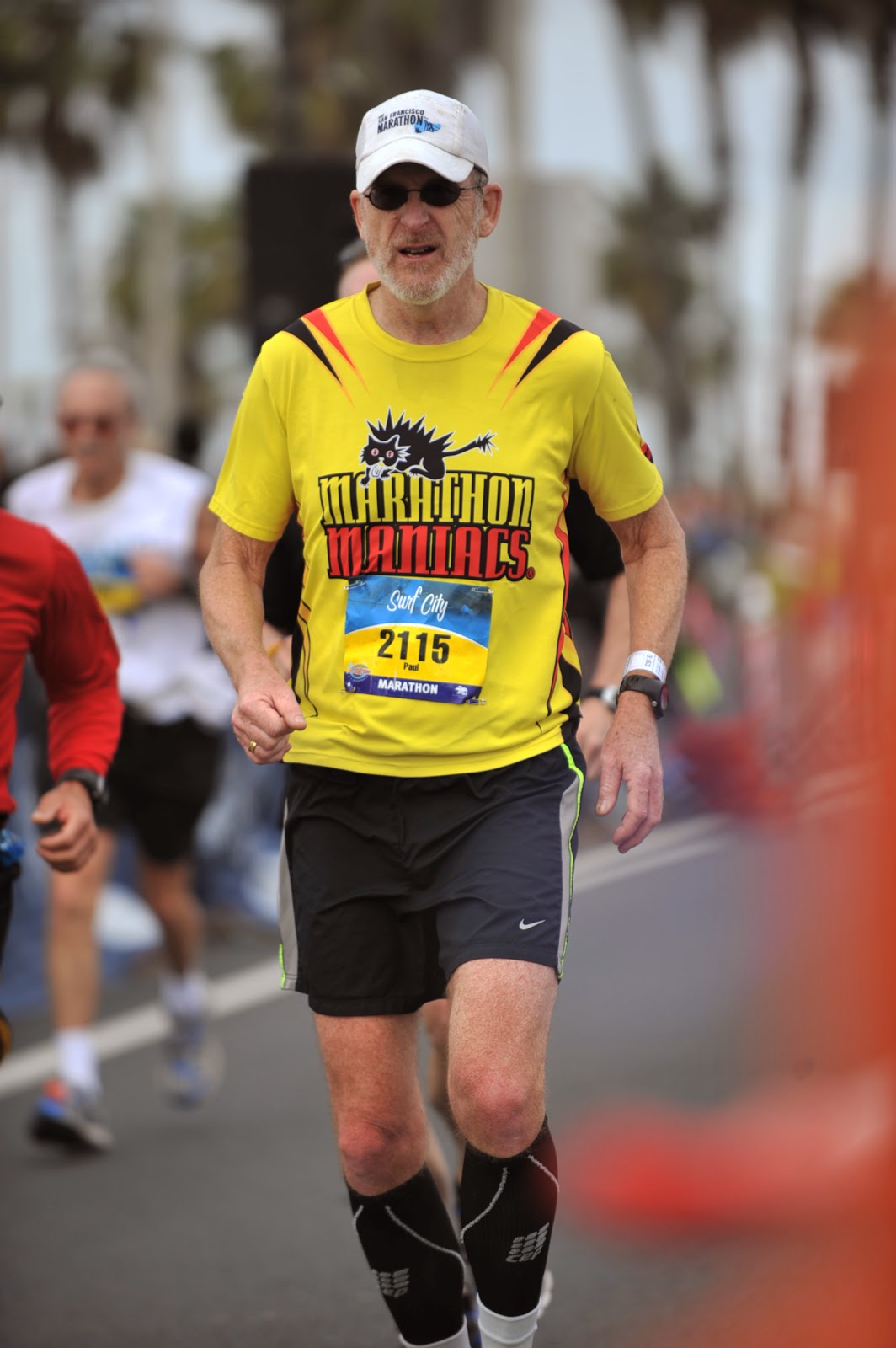 The turnaround back toward town was at about mile 12 and you can see my HR go from 130 to 135 around there. My legs were still strong though and so I didn't notice it too much. I did some drafting off of a guy that was a good pace match for a while. Mile 15 was the worse..I was waiting for the turn around.my pace dropped to 8:59.

At mile 16 we turn downwind again and I noted at the time I was hitting 8:45s with the same effort as heading upwind at 8:59. In retrospect I should have slowed down by 10-15s per mile at least at this point. As the effect of that wind on the last leg back into the wind after mile 21 should have been scaring the heck out of me.

However, at the time I felt pretty good (going downwind) and so I figured yes I would lose some time in the last 6 but I would still break 4 hours.

Alas, when i turned around at mile 21 I knew in just 15 seconds or so how badly I misjudged the effect the wind would have. Instantly instead of sweating I was cold from the wind evaporating all the accumulated sweat off of me from the downwind run. I felt like a bungee cord was attached to me pulling at my back. 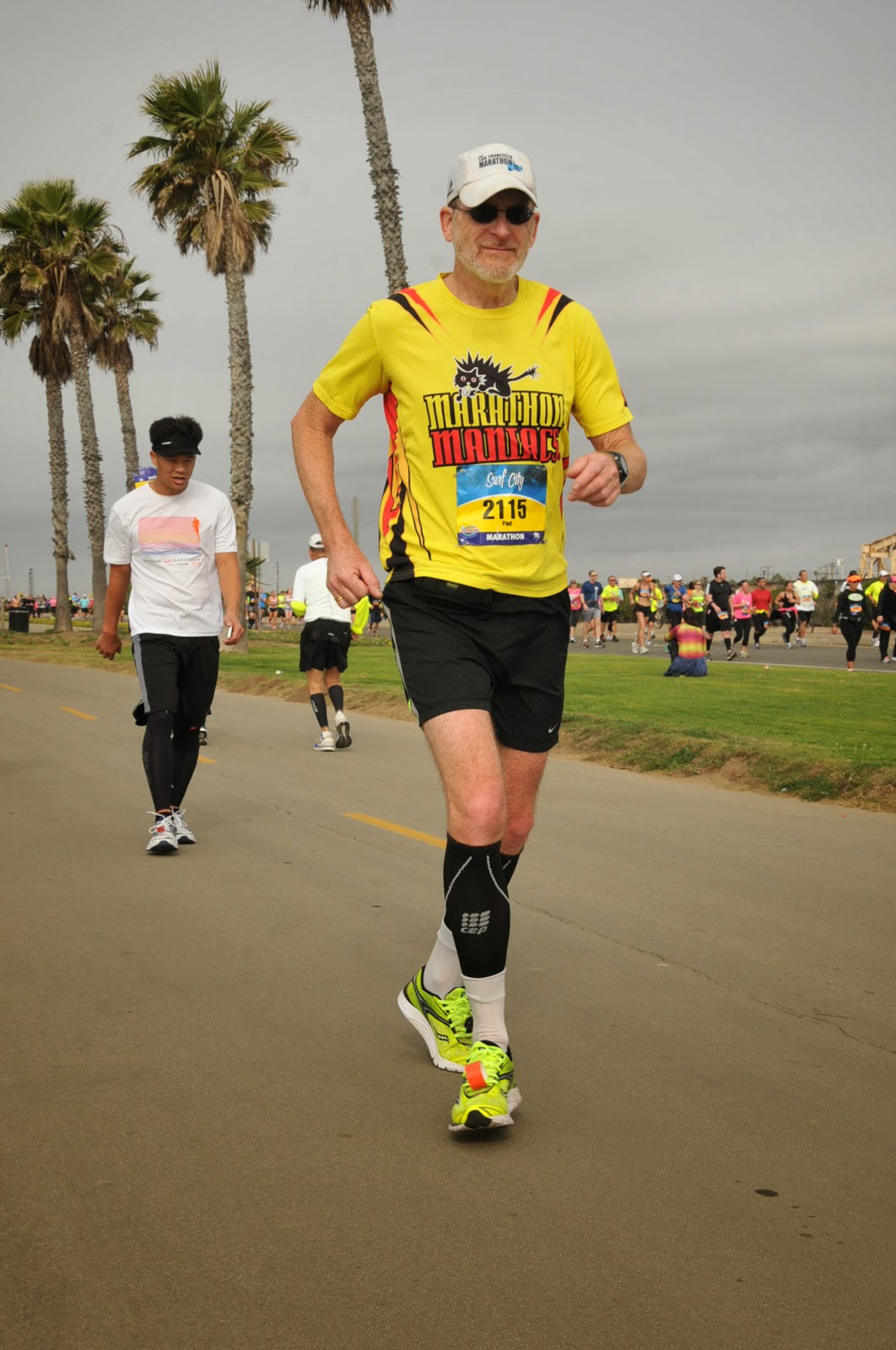 I had also failed to take into account that the boardwalk was more exposed to the winds than the PCH so  the winds were a bit stronger than the previous run toward town.

I could not hold pace without a monumental effort (that was not going to last for 5 miles)...I really had to push hard... I let the pace drop to 9:05, then 9:30's and then at mile 24 I just could not hold any more and had to walk.

(In retrospect I should have dropped to a 10:00 or 11:00 pace at the turnaround....having to walk is a real killer for the pace and so the longer you can put that off and run at any pace,  the better. Probably could have run a 4:03 doing that. However, this is hard to do mentally...)

At that moment I started walking knew I was going to rack up more minutes and so finish at  more like 4:05 or so.  Disappointing after such a good early run but my legs were pretty burnt and there is no arguing with the body at point.. I did trot it in the last mile and my legs were very close to cramping.


22 is the first split after turning back into the wind. HR jumps up 5 bpm and pace starts dropping.

Here are the stats...not too bad considering hitting the walking. This is my third fastest marathon out of 20.

How can I prevent this from happening? I think Jill hit the nail on the head in her previous post comment she left me.

You need extra muscle for special strength needs during the run like hills and wind, especially as you get older and are losing muscle mass. You can be just fine on the flat but get tired and throw in some extra loading and it pushes you over a threshold that forces you to slow down and eventually walk.

Despite the ending I did enjoy this marathon a lot.  They hydration was excellent and the GUs all consumed with no problems...The pacing was good, the tangents running was good, form was good (No problems afterward except soreness).

On to the next! (Still figuring that out) 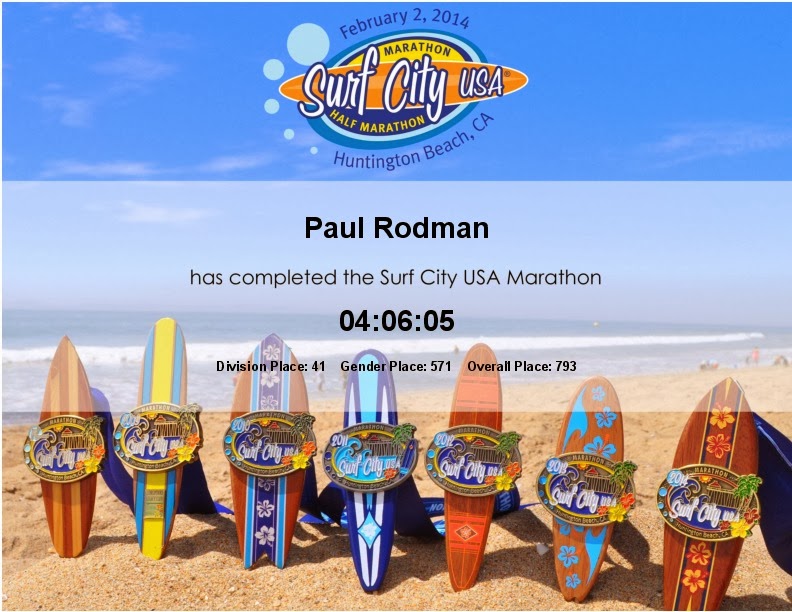