The Brightroom photos came in for Surf City...for my first few marathons I didn't take my own pictures and I didn't buy the photos taken during the race. Eventually, I realized that one of the most fun parts of the travel Toni and I do is the photos we can enjoy in the days and years after, and that the same would be true of my races.


Also, when I consider how much time goes into training and money goes into airfare/hotel/entry fee each race that one has to travel to, the money to have a few really good photos is well spent. I also don't begrudge the couple of minutes I probably lose running the race taking photos ;)

First though, I want to give you a closer look at the California Dreamin' series idea. (The name is derived from a song written in 1965 by the Mamas and the Papas. Rolling stone gives it #89 in the 500 top songs, ever. If you are buried under snow right now I encourage you to listen to it ;)


This was the last year for this perk (a new series idea is supposed to be in the works) and I think it was a great idea. Runners are always looking for some new challenges for motivation to move to another level of running!

In this case these three big California races teamed up and offered extra prizes (jacket, medal) for completing all three races within two years. You could run any combination of half or full marathons, which made it accessible to a lot more people.


I decided to do all three as full marathons and because the series was ending I needed to do them all back-to-back (July->Oct->Feb). That was a challenge! 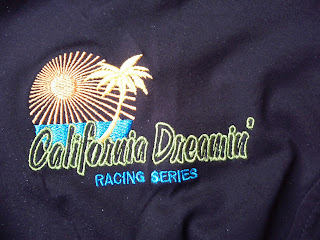 I liked each of these races, but I have to say the Long Beach logo really sucks (IMHO). Good 'ol ICB needs it's spot smack in the middle of every race logo. Bletch.


Anyway, here's a closeup of the jacket embroidery...it's not bad. No mention of the races or even that it's about running tho...could be stock car racing!

A new thing they have now is video clips of you running. The first one is at the 12 mile turnaround (same as photo above). In finish line video ...I come down just to the left of the dashed line about 8 seconds in.


This is the first time I've actually seen myself running on video. I have to say it's very disappointed to see how slow I'm actually looking. I also look pretty stiff. My 'sprint' to hold off the girl in red is pretty hard to notice 8/


But I felt so happy with my performance I did a little fist pump for the first time 8) (Didn't do that at my SFM PR 4:06..I was pretty wiped ;)