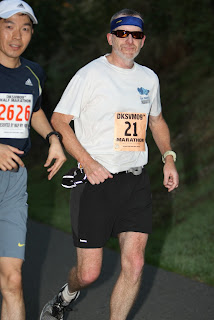 My goals for this race were do a good job pacing (to avoid the wall), and slightly push for a PR if possible. My training hasn't been consistant enough to expect to improve my time by much, and indeed, I ran almost exactly the same pace as the SF Marathon [ 3 seconds slower]

Went to bed early on Saturday night, I got up at ~3:30am to have a light breakfast (some last carbs) then back to bed and finally got up and put on my kit at 5:45. I got to the race, which starts at the corner of Almaden Blvd and Park Ave in SJ, about 40 min before the start at 7am....the place was already hopping with runners, as usual.

As I walked to the start I noticed that my Garmin 450 GPS watch was stuck saying the time about 1 hour prior! Pushing buttons did nothing. The watch appeared to have crashed. I debated walking back to the car and getting rid of it (and my heart rate monitor chest strap) but dedcided it was too far and I'd just run the race bumming splits off other people.

About 10 minutes later I tried a really long button press and it suddenly started working again. Go figure...anyway, that was a nice repreve.

It was still before sunrise, up in the sky over one of the hotels I could see Venus as the 'morning star'. There was a lot of people, but not as crowded as the SF Marathon! Most of the crew, as usual, was halfers. There was some oldies music blasting (not bad 8) and the race coordinator with his patter. The temp was about 52, just the way we like it.

I'm guess starting to get used to the starts: The MC announced "ONE MINUTE TO START" and I looked at my heart rate monitor and my pulse was a nice relaxed 59 bpm...no adrenaline (unlike my first marathon). Chugged my water and off we went with a big countdown.

Too dark to see my splits but I could see my heart rate (bigger text for that) and tried to keep it around 125 or so, as I knew that should give me around 9:30-ish pace..but the course was a bit congested for the first mile and I couldn't do it. Finally could see that I'd clocked only a ~10:00 min/mile pace. At about 1.5 miles it was opened up and I could hold my pace (trying for 2:22 splits -> 9:30 pace (not allowing for GPS error though so really about 9:45)). I settled in nicely and felt really good, with an easy, relaxed form. My breathing at this stage was very easy: I could run with my mouth closed and just use my nose.

The SJ police were out in force closing off roads ..of course nobody but us crazies was really up yet 8)

The water stops were extremly plentiful. I seemed like we had one every 2-3 miles. The cups were full-size (not the stupid little ones they used at SFM) and the volunteers were the BEST. Many of them and all on the job.

The course took us through some pleasant tree-lined neighborhoods in SJ (with good quality pavement...never saw any really bad stuff in the whole race) and then at about mile 5 took us onto the Los Gatos Creek trail (also paved). I'd never been on this trail so I was looking forward to learning about it by running it.

Just before the trail I spotted a guy running with a long stick with three balloons on it. "Oh!, a pacing group guy", methinks. As I approach him I look forward to getting some confirmation of my pace. Alas, the balloons said "4:30" on them. I was flummoxed as that is about a 10:12 pace..and he was going a hell of a lot faster than that..probably a 9:50 pace. I was tempted to ask him about it but decided to just keep on truckin' by him.

In this section of the race I passed some but mostly got passed myself. Sometimes you go back and forth with somebody: the trail has some small rolling hills as you go over bridges or under overpasses and some people like downhills (me) and others like the uphills (I slow down to keep my effort level more linear). The trail is mostly wide enough for everybody....I had no problems with people running 4 abreast or any of that rude kind of behavior.

[I also didn't have any problems with 'plugged-in' people hogging the road.]

After 7-8 miles we are still in the groove, but we are seeing the slight uphill that goes to Los Gatos...so the HR to hit our pace has gradually inched up to 131 or so. (It will vary based on the slope a little, but you can account for that mentally). When the watch reported my 1/4 miles splits (about every 2:22) I was right on the money for the most part.

I still felt really good. I was taking a gel pack (for electrolytes and some sugar mostly for keeping the brain happy) every 5 miles.

I had been wondering if I would see my Los Gatos friends, and suddenly at about mile 12 I realized that the two spectators at the trail's right turn about 20 feet ahead were them! I think they were so busy looking around at the runners that had gone by, and the ones coming up the hill that I think they didn't look really close. Also I don't think they are used to seeing me in my running sunglasses (they are new). As I approached I says "Hey--!" and they both got a big shock and suddenly realized it was me. We high fived and I kept on trucking.

As you approach Los Gatos after 13.1 miles the course loops around off the trail and then takes you back and merges you back into the trail. I think at about mile 10 we started to see some marathoners coming back the other way now (i.e. the fast ones!), they were impressive to watch.

Eventually, we ran onto the Los Gatos High School track and I could hear the MC up there announcing the half marathon finishers by name (he looks up their bib number in the database) and encouraging them the last 1/4 mile. Us marathoners split off and suddenly we could see how few of us there were...it became downright sparse.

In fact, for most of the rest of the race I usually only saw 3-6 people ahead of me at any given time! Amazing.

After the half (the ante-up) is where the race really starts...now you have to start placing bets... I felt pretty good, but not good enough to do anything stupid, and so I kept to my same pace. At this point I started passing people and not so much getting passed. A lot of people seemed to have gone out too fast.

The miles ticked by, 16, 17, 18 and I noticed I was passing a LOT of people walking. Some of these people I recognized from being passed earlier. We are still holding pace well, in fact we are using the downhills really well.

Mile 20 is a belweather mile...normally in training you don't go further than this (it's too hard on you to do full marathons in training), and so how I feel vs my normal training run gives me a good indication on how I'm set up for the last 6.2 miles. I felpt pretty good, better than my usual long runs, so the last 6 should not throw a wall at me...or so I hoped. So far, my form was still pretty good and I was still holding my pace just fine.

After mile 20 you drop back down onto SJC streets where there was no tree cover. The sun was out and it was hot, probably 70 or so. More and more people were walking and I was passing them all.

As we hit the last 2 miles, I knew that even though I was wanting to stop and I was not quite holding my previous pace, I was in good shape to finish. I thought about speeding up, but the pain to do it just to save a minute or two in the last miles wasn't something that I felt I needed to do.

Eventually we saw the left turn into Discovery Park. I managed to speed up a little bit for the last 1/4 mile and the MC called out my name as I approached. (People were only finishing every 30 seconds or so..as I said it's a sparse race.

After I got my medal (the ugliest I've seen so far, boo) and my free tacos, they had some nice chairs set up for the runners to sit in while they eat (If we sat on the ground we might not get back up too easily 8), and a bunch of us near each other started chatting about our race. I felt pretty good as all of these people were more experenced (5-20 marathons) and younger (30's , 40's) and my time was faster than all of them.

So, all in all, I felt pretty good about this race. I enjoyed the trail a lot and hearing and seeing the rushing river was nice. I was happy to have achieved fairly even pacing and avoiding the wall. I think I probably did pretty well relative to the field. [Update: I'm happy with 340/769] 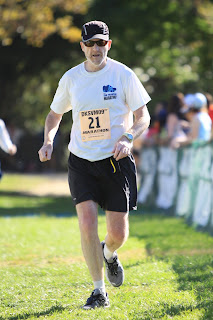